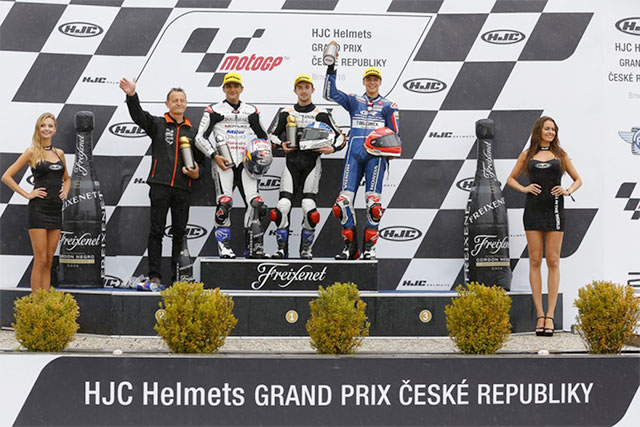 Peugeot MC Saxoprint rider John McPhee has won the Moto3 race at the Automotodrom Brno, as the Scot had a calm, collected and almost faultless ride to the flag as his rivals fell away.

Championsip leader Brad Binder (Red Bull KTM Ajo) crashed out of the lead with 4 laps to go, before Khairul Idham Pawi (Honda Team Asia) also ended up in the gravel in a dramatic change for the race in the final few laps.

Binder kept the lead off the line, before losing places on a cautious first lap as Jorge Martin (PULL&BEAR Aspar Mahindra) took the lead and set off trying to make a gap, with a breakaway group of Martin, Binder, McPhee and Aron Canet (Estrella Galicia 0,0) heading off from the pack.

As Binder upped the pace McPhee stayed calm in P2, before that proved the perfect strategy as the South African crashed out of the lead. It took Malaysian rider Khairul Idham Pawi ‰ÛÒ winner in the wet in Argentina and Germany ‰ÛÒ until 14 laps to go to get to the front of the chasing group, before crashing out of podium contention close to the end of the race. The Malaysia had gained 25 places from his grid position.

McPhee stayed calm and continued his solid pace at the front as he inherited the lead, until an almost-highside saw the Scot out the seat and desperately hanging onto his bike. Saving the moment and retaining the lead, the Brit kept his head and rode through a faultless last lap to cross the line for his first Moto3 win. 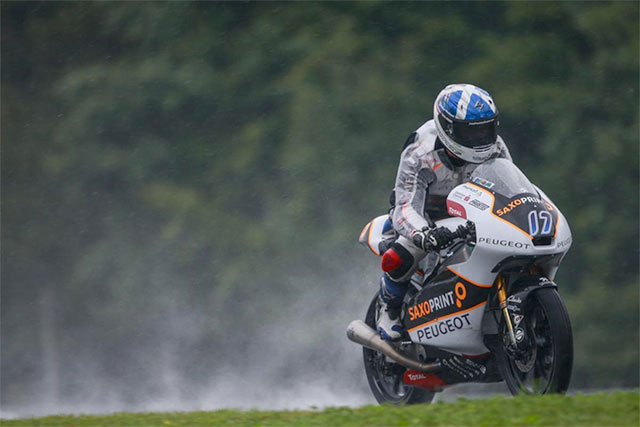 Winner John McPhee
Jorge Martin (PULL&BEAR Aspar Mahindra) had a drama-free ride to P2 as those around him pushed too hard, taking his first podium in some of the most difficult conditions in the season so far. The Spaniard led early before letting others take the risk; a strategy that paid off at the flag.

Fabio DiGiannantonio (Gresini Racing Moto3) was the rookie star of the race, as the Italian completed the podium after originally moving through the field following wet weather expert Pawi. Keeping his own pace and his head, the Italian took another podium in his rookie year as he crossed the line ahead of his more experienced teammate Enea Bastianini.

Jorge Navarro (Estrella Galicia 0,0) completed the top ten to gain some points back on Brad Binder in the title fight, but had been further up the field until the final stages. The gap between the two now sees the South African clear of his Spanish rival by 61 points.