McGuinness and Cummins Remain With Honda Racing for 2016 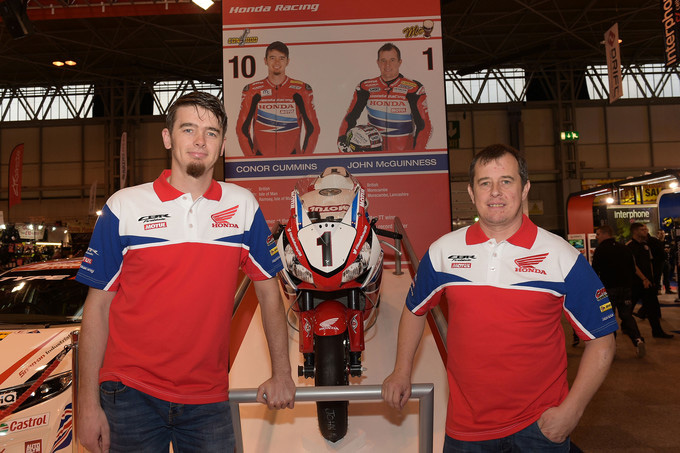 Honda announced over the weekend that John McGuinness and Conor Cummins will remain with Honda Racing for its 2016 road racing campaign.

The announcement was made on the main stage in front of a large and enthusiastic crowd on ‰Û÷TT Day‰Ûª at the Motorcycle Live exhibition at the NEC in Birmingham.

The ‰Û÷Morecambe Missile‰Ûª and the ‰Û÷Ramsey Rocket‰Ûª will contest the Superbike classes at the North West 200 and also the Superbike and Senior races at the Isle of Man TT aboard the proven Honda CBR1000RR Fireblade SP. Cummins will also take part in the 2016 Ulster GP and both riders are scheduled to race at Macau later in the year.

With 23 TT wins to his name, McGuinness proved he was still the man to beat in 2015, storming to victory in the blue riband Senior race and smashing the outright lap record around the 37.73-mile Mountain Course with a 132.701mph lap.

Isle of Man native Cummins, 29, took two podium places in tricky conditions at the 2015 Ulster GP aboard the Honda CBR, finishing second in the Dundrod 150 Superbike race and the final Superbike race of the day. Both riders competed in last month‰Ûªs 12-lap Macau Grand Prix where they took fourth and seventh places respectively on their Honda machines.

In addition to their commitments with the official Honda Racing squad, McGuinness and Cummins will race with the private Jackson Racing team on Honda‰Ûªs CBR600RR in the Supersport class at the NW200 and TT. The duo will also compete in the 2016 Endurance World Championship Superstock class aboard the Fireblade SP and Cummins will compete for Jackson Racing in the Superstock class on the roads.

Motorcycle Live has been a successful show for Honda who showcased its new range of 2016 motorcycles, including the all-new Africa Twin and the CBR1000RR Fireblade SP, McGuinness and Cummins will hopefully ride to victory on in 2016.

"We‰Ûªre pleased to be keeping both John and Conor for our 2016 road racing campaign." Team Manager Neil Tuxworth said. "Our relationship with John is like family now and is proven to reap results.

"What he did in the Senior TT was unbelievable and to achieve a near sub-17 minute lap was phenomenal. Conor continues to impress us with his work ethic and attitude, there‰Ûªs no doubt that he‰Ûªs hungry for success and puts in 100% effort on and off the bike.

"We‰Ûªre looking forward to 2016 and seeing what we can do in the road racing events." Tuxworth concluded.