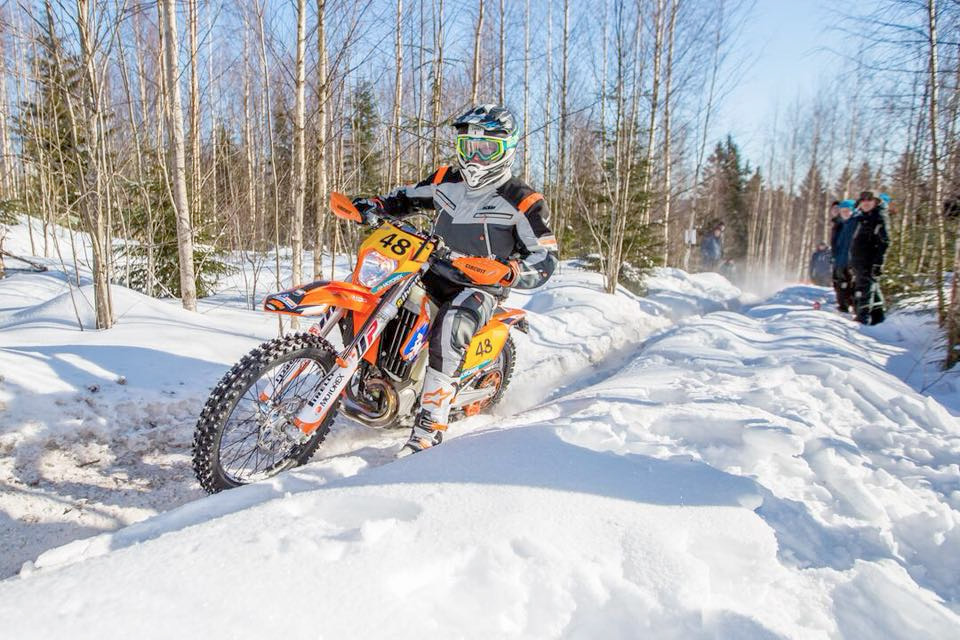 Finn Aleksi Jukola made the most of the beautiful, but trying conditions to take the EnduroGP class win. Photo: MX24
Round one of the 2018 Maxxis FIM Enduro World Championship got underway overnight in deep snow covered -13 degree conditions at VierumÌ_ki in Finalnd.

However, that didn't discourage the 180 riders of the Grand Prix of Finland who raced relentlessly for twelve hours and thirty minutes, with sixteen timed special tests spread over more than 400 kilometres‰Û_ 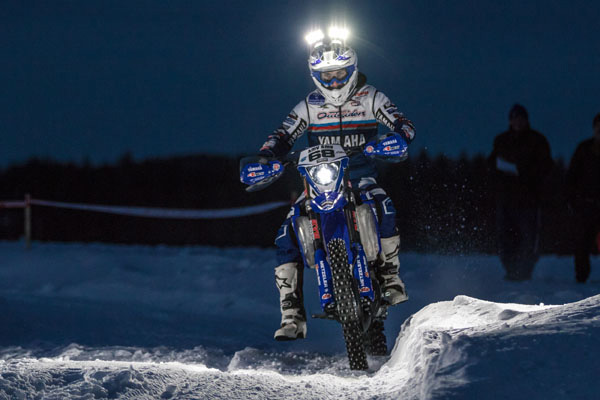 Jamie McCanney
After pushing hard to close the gap on the KTM rider, Pohjola was unfortunately forced to give up on special test 13 due to a mechanical problem‰Û_ as the sun dipped low on the horizon and night fell, the last 3 specials were run in total darkness! Eero Remes brief leader of the scratch class, battled with his compatriots Mika Tamminen, Toni Eriksson and Jussi Arvaja for top honours.

The factory TM rider had to fight hard in the E2 class against another Finn, Matti Oikari, while the Italian duo Alex Salvini, Deny Philippearts fought a superb battle throughout the day for the crucial points of the final podium position. Salvini, the Just1 rider, took 3rd and confirmed his excellent form and his very promising start to the season. But a special mention to the remarkable Deny Philippearts who scored a brilliant 4th place result, his best since his debut in the World Championship 8 years ago.

It came as something as a surprise for Deny, who is one of the most friendly riders in the Paddock. Credit must go to another E2 rider, Joshua Gotts who also performed excellently to grab his best World Championship result; 5th place. These dark horses proved to be outstanding in the category, where Phillips 6th, Larrieu 7th, Oldarti 8th and Charlier 10th, all struggled in the immense cold and deep snow!

After the retirement of Eemil Pohjola, it was Jamie McCanney who was top man in the E1 category, despite the superb performance of his compatriot Brad Freeman! The factory Yamaha Outsiders rider offered up a splendid and unexpected victory on the first day of this "fearsome" PÌ_ijÌ_nne GP.

The Manxman held off charges from local rider Jussi Arvaja, who finished 2nd, and Freeman who 'scratched' the last two night specials against the Finnish talent! Antoine Basset returning to the Grand Prix paddock after a serious knee injury that sidelined him for more than a season, proved he is as strong and courageous as ever, performing well among a talented pack of Finns.

"If I had been told that I was going to start the season in Finland with a win in my class...I would never have believed it!" McCanney declared.

"Of course, if Pohjola hadn't had a mechanical issue, I wouldn't be on the top step of the podium, but as we often say; to finish first, first you have to finish! In any case, it feels good to start the season like this even if I'm feeling tired!‰Û 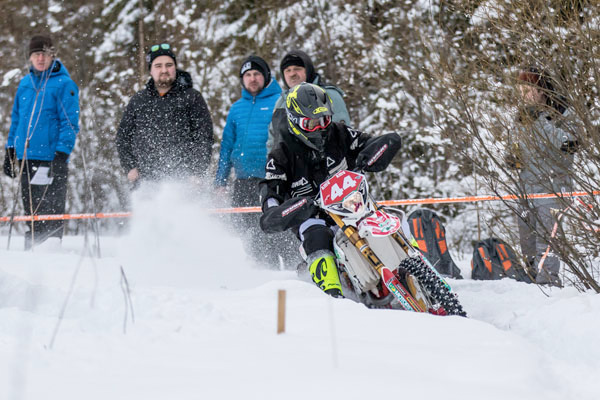 Deny Philippearts scored a brilliant 4th place result in E2, his best since his debut in the World Championship 8 years ago.
Beta's Steve Holcombe honoured his Number 1 plate! He was indeed the best of the "foreigners" in Enduro 3, thanks to his smooth riding which was perfect for the hellish conditions. The 2017 EnduroGP World Champion secured a brilliant 5th place against local riders Jukola, Ericsson and Tamminen who were impregnable today. The factory Beta rider scored important points for the rest of the season even though Gas Gas factory's Danny McCanney and Christophe Nambotin also performed well, finishing 7th and 8th respectively.

The first day of the "great Finnish adventure" that is the PÌ_ijÌ_nne GP kept all its promises while also offering some nice surprises... including the victory in EnduroGP (scratch) of KTM Finland rider, Aleksi Jukola, despite the withdrawal of the Austrian brand from the World Enduro Championship for "marketing‰Û