Maxwell takes Superbike championship lead with Round 4 victory in WA 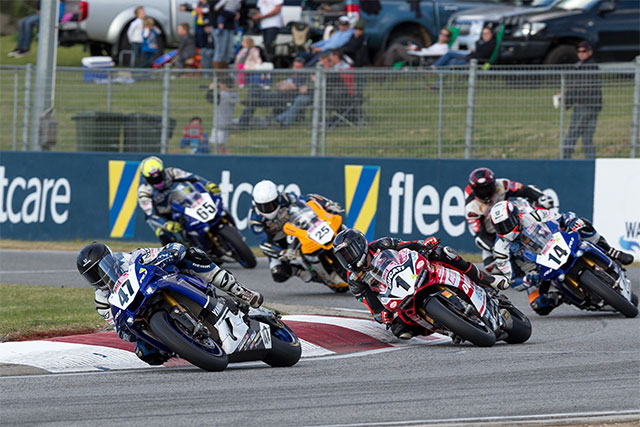 Despite carrying a hand injury after a crash during practice, Maxwell showed strength and determination on the Western Australian circuit today, fighting off an in form Ducati mounted Mike Jones to snatch up the round four win.

With reigning 2015 ASBK Champ Jones starting on pole for the first time so far this season this morning, there was plenty of excitement on the grid ahead of race one commencing today - but it was Crankt Protein Honda Racing Team‰Ûªs Troy Herfoss who screamed off the straight and in to the lead, while Yamaha Racing Team‰Ûªs Maxwell and Glenn Allerton slotted in behind him.

With two laps in the books, Maxwell began to apply the pressure on Herfoss for the top spot, and by the time riders reached the switch back section of the track on lap three, Maxwell was the new race leader, with Herfoss relegated to second. Unfortunately for Herfoss, two more positions were snatched away from him when Allerton and Jones began their charge to the front ‰ÛÒ Allerton moving in to second behind his teammate, while DesmoSport Ducati‰Ûªs Jones slotted in to third.

After only five laps, Maxwell continued to maintain a healthy gap on teammate Allerton, while Jones held down third position from Jon Daniels Racing‰Ûªs Daniel Falzon, who had passed Herfoss to move in to fourth. From there, Falzon was on a commanding charge, snatching up a new lap record with a 55.446 lap time, proving that he was well and truly the fastest Superbike on track during race one.

After eight laps, Jones applied enough pressure on second placed Allerton to make the pass, relegating Allerton to third, where he also began to feel the daring speed of Falzon.

But it was Jones‰Ûª performance who had spectators cheering on their feet in race one - the Ducati mounted star snatching away the lead from YRT‰Ûªs Maxwell on lap 11, while Falzon steered his Yamaha past Allerton to slot in to third position.

With eight laps remaining, the running order saw Jones continuing to lead from Maxwell by 0.161 of a second, while Falzon maintained an impressive third position followed by Allerton and Herfoss who were in fourth and fifth places respectively.

By lap 14, Jones and Maxwell began to approach back markers, but it did not at all effect Jones‰Ûª impressive performance ‰ÛÒ streaming past lapped riders, and with a clear track ahead of his Ducati machine, Jones continued to hold off the experienced Maxwell.

With four laps to go in race one, the only change to the standings came from Falzon, who dropped from third to fifth position, allowing Allerton to move up a spot while Herfoss followed suit in fourth.

And when the Superbike riders headed in to their last lap, both Jones and Maxwell remained only 0.14 of a second apart, treating spectators to a final dash to victory.

But it was a fairy tale ending for youngster Jones, who showcased impressive maturity, leading from lap 11 all the way to the chequered flag. Despite applying the pressure on Jones throughout the entire race, Maxwell (Yamaha) crossed the finish line in second position followed by teammate Allerton, while Honda mounted Herfoss and Falzon wrapped up race one in fourth and fifth places respectively.

When race two kicked off, thousands of spectators watched on as Herfoss launched off the grid and in to turn one with the lead for the second time today, followed by Maxwell and race one winner Jones.

And with the confidence of a race win up his sleeve, Jones took no time at all to make two passes and move in to the race lead, and unfortunately for Herfoss it was somewhat a repeat of race one, because before long Maxwell had also gotten by the Crankt Protein Honda machine.

After four laps, Jones continued to lead from Maxwell by only 0.187 of a second, while Yamaha‰Ûªs Allerton had also made the pass on Herfoss to move in to the final podium position.

But by lap five, spectators on the straight were greeted with a new race leader ‰ÛÒ Maxwell‰Ûªs number 47 Yamaha R1 machine leading the way from Jones by the narrowest of margins followed by Allerton who remained in third. Herfoss who had led the first lap of race two, dropped back to a disappointing sixth place.

As the Superbike class reached the half way point, Allerton began to close in on the rear tyre of Jones‰Ûª Ducati machine, testing the youngster‰Ûªs ability to hold off the undeniable experience of his closest threat. Falzon, who now holds the Barbagallo lap record after race one, maintained fourth position from Halliday and Herfoss who were in fifth and sixth places.

With seven laps remaining on track, Maxwell, Jones, and Allerton began a three-way fight for the top spot, ensuring that spectators would leave the Round 4 of the ASBK with the final race going down to the wire.

And when riders headed in to lap 17, it was a shock to the crowd to see Yamaha teammates Maxwell and Allerton in positions one and two, with Jones losing time in the basin forcing him to drop back to third position.

And when the chequered flag flew for the final time for the Superbike class, it was Maxwell‰Ûªs turn to celebrate ‰ÛÒ taking the final race win aboard his Yamaha machine, while teammate Allerton finished in an impressive second. DesmoSport Ducati‰Ûªs Jones wrapped up the final race of the day in third, followed by Falzon and Herfoss who finished in fourth and fifth places respectively.

Yamaha Racing Team‰Ûªs Halliday concluded the final race of the day in sixth, followed by Burke, Crankt Protein Honda Racing Team‰Ûªs Stauffer, Matt Walters and Elliott who all finished inside the top ten.

When the points from both races today were tallied, Yamaha Racing Team‰Ûªs Maxwell 2,1 finishes saw him awarded with the Round 4 win and the Superbike championship lead, followed by Jones who wrapped up the round in second, while Allerton completed the Superbike podium in third.

Yamaha Racing Team‰Ûªs Maxwell, who will head in to Round 5 as the championship leader by five points, spoke moments after stepping off the Superbike podium.

‰ÛÏI‰Ûªm absolutely stoked to leave round four with the win. Barbagallo was one of the tracks that I was unsure about, and didn‰Ûªt know whether I could go with the likes of Mike (Jones) and Glenn (Allerton), so to get a race win and to turn everything around after a crash on Thursday feels awesome,‰Û