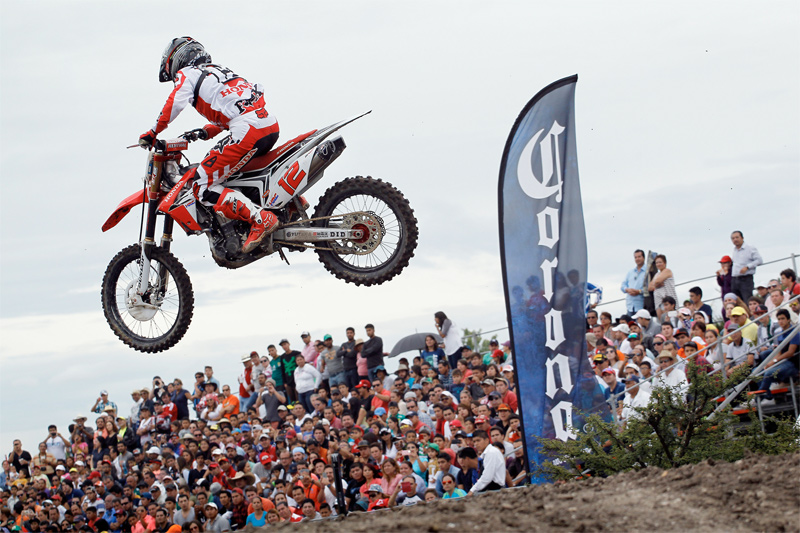 Max Nagl‰Ûªs performance in the qualifying race for the MXGP of Mexico was every bit as dominating as his double victory last weekend in Brazil.

He ran away from the field to cross the line for a convincing fourth qualifying win of the season, and his second in as many weekends.

It was another gate to flag victory too. Max led into the first corner on his Honda CRF450RW and never looked back, delivering a succession of fastest laps around the fast and undulating venue to build an early lead that he never relinquished.

The No.12 rider was the only rider to dip below the 1m49second bracket with a fastest lap that was 0.8seconds clear of anyone else. Demonstrating his control of the pace today, with just three minutes of the 20 remaining he set a lap that was still good enough to be the fastest lap of the race.

‰ÛÏIt was great today - I had a good gate jump again, a good start and then was pushing really hard to get a gap like in Brazil." Nagl stated. "This morning it was really muddy but the track was coming a lot better this afternoon.

"I was feeling comfortable today ‰ÛÒ German races have almost the same ground and I like it when there are deep and long ruts like we have today here. I like the riding here ‰ÛÒ it‰Ûªs a lot of fun.

"I was doing everything right and the team were working great on the bike. I‰Ûªve been feeling sick for the last three days and was starting to think it wouldn‰Ûªt be our weekend, but I felt really good today.‰Û
In MX2 qualifying it was championship contender Jordi Tixier who raced to the win during the qualifying race.

Herlings suffered a broken femur just on two months ago and is planning on lining up on the gate tomorrow in a bid to win this years title.

The Dutch rider completed just two laps of the qualifying race before pulling into the pits and heading to hospital for a precautionary X-ray to ensure his leg is up to the task of racing in Mexico. At this point in time it is expected that Herling will line up to race.