Max Nagl Confident of Back To Back Wins At MXGP Finale 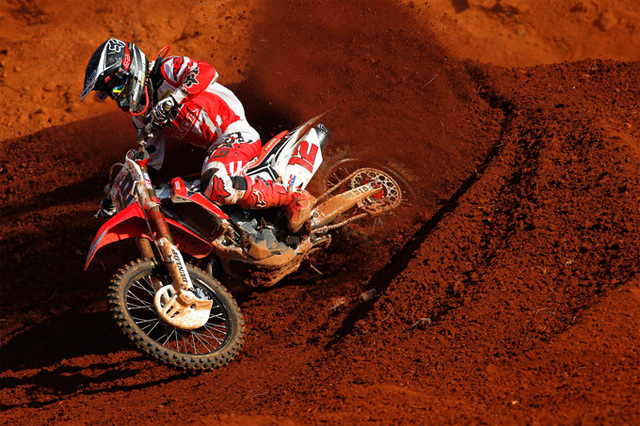 The final round of the 2014 MXGP season at LeÌ_n, Mexico comes just seven days after the riders had to endure the heat of Goias, Brazil where Team HRC‰Ûªs Max Nagl took a dominant overall victory on his CRF450RW.

Mexico hasn‰Ûªt been on the calendar since 2012 when the MXGP riders visited the Guadalajara circuit. Much the same as then, Evgeny Bobryshev won‰Ûªt be able to compete due to injury leaving just Nagl on the No.12 machine.

There is a little bit of uncertainty as to how this final round will play out as LeÌ_n is another new circuit for the 2014 MXGP season, which makes this last round all the more challenging for the riders and the teams who will need to get up to speed quickly on Saturday morning.

After the performance in Brazil though, where Team HRC and Max Nagl wasted no time in getting to grips with the similarly new Goias track, the team‰Ûªs confidence is high.

"Last weekend was a sensational day for me, to win again a Grand Prix and with both races." Nagl stated. "You can not imagine how emotional this moment was when I crossed the finish line!

"Now I'm looking forward to the Grand Prix in Mexico and will try to get on the podium again. It's another new track, but in Brazil we had the whole weekend a great setup for the bike so we'll try hard to do the same.

The state of Guanajuato is fast becoming one of the most popular tourist destinations in Mexico with motocross becoming another big attraction for both the tourists and the local residents.

LeÌ_n features the third different surface in three events as the 1500m intermediate soil layout follows on from the deep sand of Lommel and the hard pack of Goias. This weekend should be comparatively cooler than last with an average temperature of 25 degrees Celsius.

Top Image: Max Nagl will be looking to make it back to back MXGP wins in Mexico this weekend