Max Fricke Wins Round One of the 2019 Australian Speedway Championship 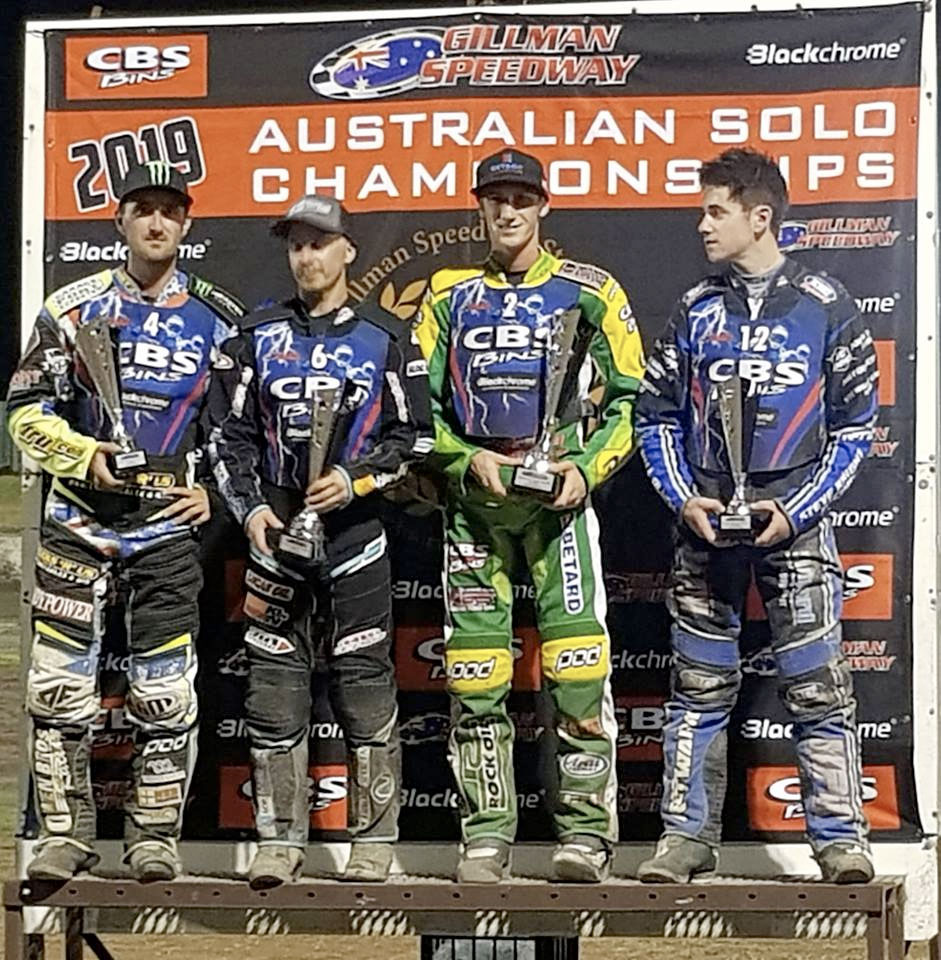 South Australia played host to Round 1 of the 2019 Australian Senior Solo Speedway Championship at Gillman Speedway and the fight was on right from Heat 1!

Under stifling conditions and against some of the most impressive competitors to date, Max Fricke came out on top to take first place in the opening round of the Championship.

The Australian Summer heat is an expected characteristic in each Australian Speedway Championship, but Thursday‰Ûªs Round 1 put riders to the test as they worked to keep themselves cool headed in the high temperatures. Right from Heat 1, fans were delivered a fantastic evening filled to the brim with a star-studded line-up.

Leading the charge for the opening round was Nick Morris, Max Fricke, Sam Masters and Chris Holder. Holder retired from Heat 1 and Fricke took out first place ahead of Morris and Masters respectively. Brady Kurtz, Jordan Stewart and Jaimon Lidsey dominated in the heats following, leading into what quickly became a show stopping round at Gillman Speedway!

Upcoming star Jack Holder had a slow start in Heat 1 coming in third, however he proved his skill and worth by taking out first place in the three heats afterward, securing his place in seventh overall for Round 1. Holder fought his way through to the B Final but unfortunately crashed out. Masters had an equally difficult start to Heat 1, however he managed to pick up the pace to win one first place and three second place positions throughout the evening, locking him into sixth position overall. Jaimon Lidsey was awarded with fifth place for Round 1, blazing a trail early into the Summer evening by taking out consecutive first place positions in his first two and final heats. Fourth place was secured by Stewart, who achieved three firsts and a second across his five heats of the evening! Stewart put on a fantastic show for all spectators as he secured his spot in the A Final, however his chances were cut short due to a crash early on in the final race.

Rounding out the podium in third place for the opening evening of the 2019 Australian Senior Solo Speedway Championship was Chris Holder, who scored 12 points in total although retiring from Heat 1. Holder remained a formidable force throughout, producing two first place and two second place wins in his heats. Holder‰Ûªs perseverance and immeasurable experience saw him land himself comfortably into the A Final, after leaving Lidsey, Masters and Jack Holder in the dust during the semi-final.

In second place for Round 1 was household name, Rohan Tungate, who scored an impressive 16 points throughout the evening. Tungate started off Round 1 strong with two consecutive second place positions, but proceeded to turn up the heat on his competition to take out first place in his remaining three heats! Tungate‰Ûªs efforts secured his spot in the final, however he fell just short of victory behind Fricke in the final seconds of the race. With one point separating first and second place in Round 1, Max Fricke was awarded top position with a staggering 17 points overall! Fricke was clearly the one to beat right from Heat 1, as he took out first place in three heats and proceeded into the final. With Tungate hot on his heels, Fricke kept a cool head to maintain his lead and clinched the gold he‰Ûªd battled for all night long.

Reflecting on his success so early in the Championship, Fricke stated; ‰ÛÏThe field this year was really tough so it‰Ûªs nice to start this year off with a win. I dropped a couple of points along the way, but it was great to come away with the win, I‰Ûªm very happy!

‰ÛÏThere were some new faces this year which is fantastic to see. They‰Ûªre all doing really well so I definitely need to watch my tail and try to keep them at bay!

‰ÛÏI‰Ûªm feeling really good on the bike as we head into Mildura for Round 2. I haven‰Ûªt ridden much since the end of last season back in September, so I had a couple of rides last week to shake off the cobwebs. Overall though, it‰Ûªs just really nice to come away tonight with the win!‰Û