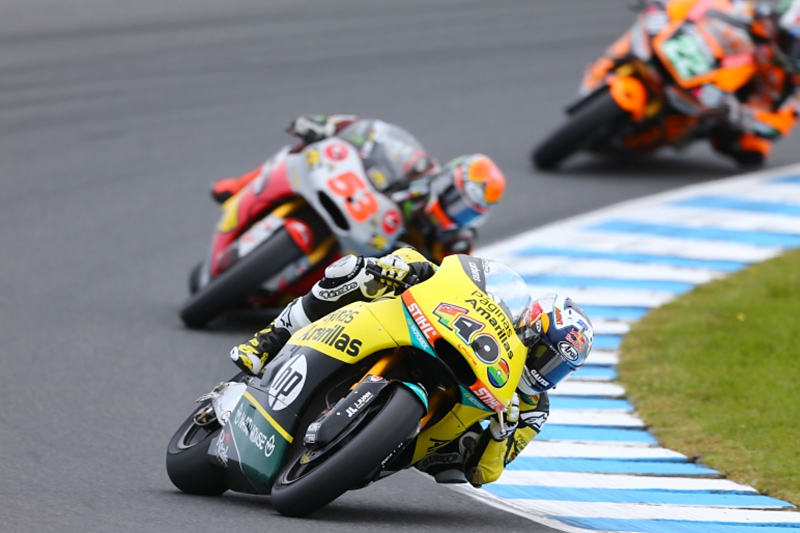 Moto2 class rookie Maverick Vinales (Paginas Amarillas HP 40 Kalex) kept the championship open for at least one more race, and preserved the Spanish reigning Moto3 champion‰Ûªs own mathematical chances of moving up to second overall with his third win of the season.

Second place for Swiss former 125cc World Champion Thomas Luthi (Interwetten Sitag Suter) also upset the odds. Luthi, winner of the last round in Japan, crossed the line two tenths ahead of title leader Tito Rabat (Marc VDS Racing Team Kalex). Rabat had the chance of securing his first crown at this race, after taking a Moto2 record 12th pole position, but now will have to wait longer.

His closest rival is team-mate Mika Kallio (Marc VDS Racing Kalex), who led the first eight laps of the 24-lap race, and then again a few laps later. He had taken benefit when Rabat ran wide at the hairpin more than once; but then made the same mistake himself, to finish a close fourth.

Reigning World Supersport champion Sam Lowes (Speed Up) was a fifth member of the front group and a strong candidate for the rostrum until the closing laps. He was still only 1.5 seconds behind Kallio in fifth, his best result so far in his first grand prix year.

Rabat extended his points lead over Kallio by three points, and now has a advantage of 41, with two rounds remaining and 50 points available; while Vinales closed to within 20 points of Kallio. At the same time, Luthi took over fourth overall from German GP winner Dominique Aegerter (Technomag carXpert Suter), who was eighth today.

‰ÛÏI really enjoyed the race ‰ÛÒ it was so close, with a lot of overtaking, a bit like Moto3." Vinales said. "At the end I was sure I could make enough of a gap because the pace was quite slow.

"I would like to thank my team. In only three days they made an incredible job to make this win possible. Now I have the target to win again in the last two races.‰Û