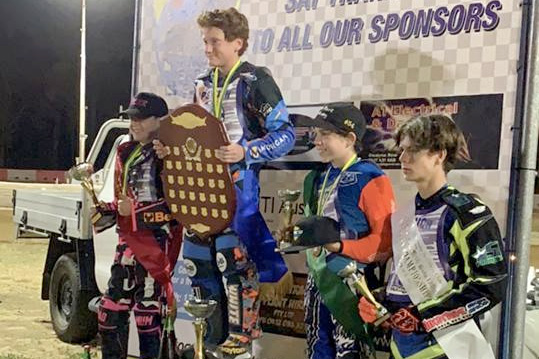 In typical Queensland fashion on a Thursday night (Jan 17th) in high Summer, temperatures remained steadily in the high 30‰Ûªs throughout the 2019 Australian U16 125cc Speedway Championship yesterday evening.

With large crowds and a fantastic line-up of rising stars, Maurice Brown took out the 2019 Championship title!

After 20 heats featuring fantastic competition from all 16 riders, the A Final was made up of Brown, James Pearson, Luke Kileen and Patrick Bowes. After a crash at turn four, the race was re-run, giving spectators and teams a superb evening of skilled racing and excellent sportsmanship!

Brown finished the race and Championship in first place, ahead of Pearson, Kileen and Bowes in second, third and fourth respectively. Brown was quick to maintain a secure lead ahead of his rivals, keeping all three riders well behind his tail until he passed the finish line!

‰ÛÏIt‰Ûªs pretty unusual to get a great crowd on a Thursday night, but we got excellent numbers so the next two days are set to be bigger and better! We just need to cross our fingers that it stays warm and dry,‰Û