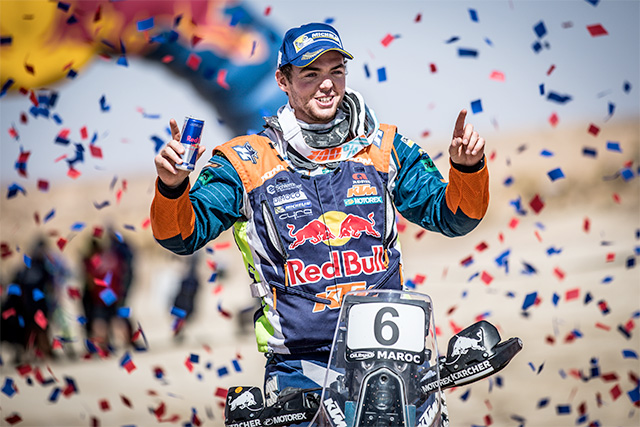 Red Bull KTM Rally Factory Racing‰Ûªs Matthias Walkner has secured a well-deserved victory at the 2017 edition of the OiLibya Rally of Morocco, wrapping up his week-long adventure in the dunes of North Africa with victory in the event‰Ûªs final stage.

Topping the standings on the sixth and final day of competition in Morocco, Walkner has won the last round of the 2017 FIM Cross-Country Rallies World Championship. Collecting valuable points, the Austrian rider moved up to third in the series‰Ûª final standings, while Pablo Quintanilla was crowned 2017 champion ahead of Honda's Kevin Benavides.

"It‰Ûªs been a long event and I‰Ûªm really happy that I won it," Walkner said. "During the last few days we were faced with overflowing rivers, long stages with tricky navigation and a series of other things that could have completely changed the outcome of the event. This is my first victory in the championship and it feels good.‰Û 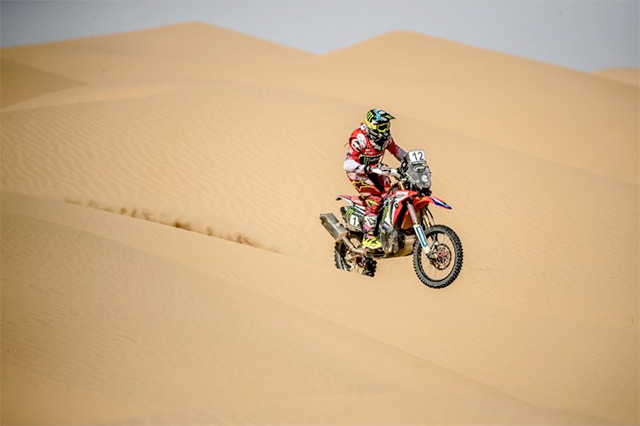 "This Moroccan Rally has been a good rally for me," Benavides said. "I did the best I could, thinking that I might reach fourth position in the World Championship and in the end I finished runner-up, after a bad start to the season, as I was still carrying the hand injury. That's why I'm happy because I‰Ûªve had a great end to the season.

"Today I gave it the maximum, but I made a small roadbook error when I was going at a fast speed, but I‰Ûªm happy nevertheless. Of the last four races, I was always on the podium: a win, two seconds and a third, and the most important thing is the consistency that we‰Ûªve been having lately. We will continue working because there are three months left before the Dakar, and although the bike has not given any type of problem, we will continue with some testing the next few days.

"I also want to thank the whole team for their great work in these races and especially my team-mates Paulo GonÌ¤alves, who I hope will recover soon, and also Ricky Brabec, for his first podium in a word championship race," Benavides concluded. 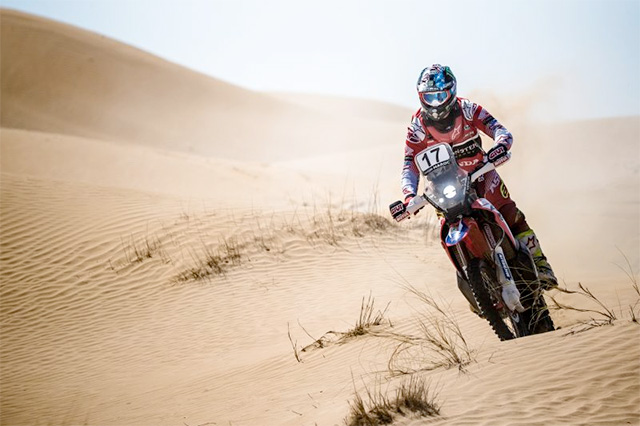 Ricky Brabec joined his Monster Energy Honda Team-mate Kevin Benavides on the podium
Benavides‰Ûª team-mate in the Monster Energy Honda Team, Ricky Brabec, shone once again on the final stage, after having clinched a first ever world championship win in the rally. The American finished second on the day, triumphing in the second special after having finished the first one in runner-up position. Brabec thus finished in third in the rally‰Ûªs general rankings, gaining him a first-time podium place in a race whose points count towards the world championship.

"I started off with a cold and sweating and getting hot for no reason; stuffy nose, sore throat. It‰Ûªs been tough," Brabec said, "It was tough for the first few days but I was able to get my stuff together. Eventually I made it happen and got my first podium in a professional world championship rally. That‰Ûªs pretty big for me. It‰Ûªs gonna make the plane ride home a little bit better, knowing that I did pretty well. So I‰Ûªm happy. For this we‰Ûªve had a very good experience going towards the Dakar."

Enjoying another good day aboard his KTM 450 RALLY machine, Red Bull KTM Rally Factory Racing‰Ûªs Antoine Meo was third in the first and longest timed special of the day and 11th in the short 8km-long final special. Earning a strong fourth place result in the 2017 OiLibya Rally‰Ûªs final standings, the Frenchman has shown he is on very good form for the upcoming Dakar Rally in January.

‰ÛÏI think I‰Ûªve made a good come-back to rally racing and I‰Ûªm happy about that. All the members of our team have done an incredible job here in Morocco and this gives me extra motivation to continue working hard. The new bike is a big improvement and a pleasure to race. Our eyes are set now on the big challenge ‰ÛÒ the Dakar Rally. There‰Ûªs still a long way to go and I want to be ready for the race in January.‰Û