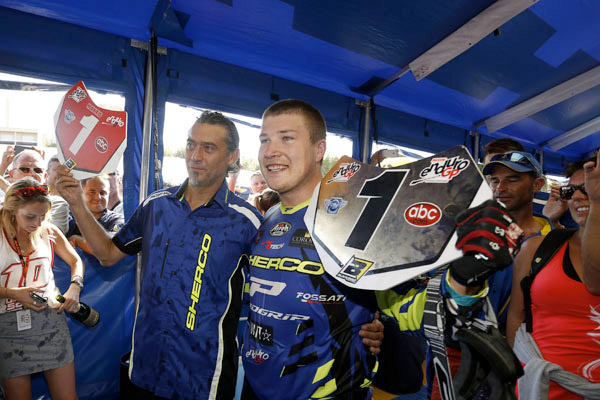 The 2016 EnduroGP championship drew to a close in spectacular style today in Cahors where Tasmanian Matt Phillips (Sherco) put the finishing touches to his incredible season and secured both the EnduroGP (overall) and Enduro 2 World Championship titles at the AMV GP of France.

Just as on day one riders faced blisteringly hot temperatures and extremely dry and dusty conditions as the 2016 EnduroGP series signed off in style. Joining Phillips as world champions were Finn Eero Remes (TM) who kept his cool to claim a second consecutive Enduro 1 World Championship while Laia Sanz (KTM) claimed the Woman‰Ûªs title. Phillips

But the day‰Ûªs fastest riders was American Taylor Robert (KTM) who brought his first season of EnduroGP competition to a close in impressive style, topping the EnduroGP results by close to eight seconds from Frenchman Loic Larrieu (Yamaha). Despite winning just two of the day‰Ûªs special tests Taylor‰Ûªs consistency saw him hold firm at the top of the class while Nathan Watson (KTM) kept Larrieu honest to eventually finish just seven seconds behind in third.

‰ÛÏTo get the overall win feels great. I couldn‰Ûªt have thought of a better way to end my season,‰Û