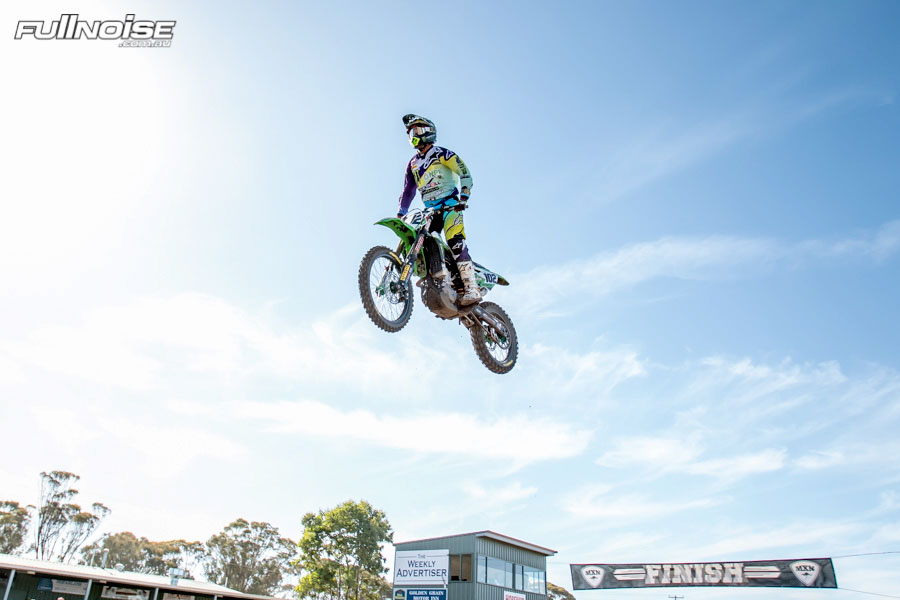 National Pump Monster Energy Kawasaki Racing Team's Matt Moss returned to his winning ways on track today, taking the Motul MX Nationals Thor MX1 class win, and putting any doubts to rest once and for all.

When the big bikes came out to play for the first time in Horsham today, spectators dotted the fence-line, all eager to witness the stacked Thor MX1 class going head to head.

After a 15-minute practice session it was straight into qualifying for the Thor MX1 riders, and with five positions in GoPro Superpole up for grabs, the 450 machines fought hard to put down their quickest lap times.

With the top five determined, it was straight into the first GoPro Superpole for 2016. CDR Yamaha‰Ûªs Ferris shocked crowds when he was absent when bikes took off, and after four riders had put down their hot laps, it was Mosig who snatched up the fastest time with a 1:50.340. Waters was second fastest, followed by Gibbs and Wilson.

When the Thor MX1 riders entered the Rockwell launch area ahead of moto one, the anticipation grew as thousands of spectators watched on, wondering who out of the talented pack would take the race win. When gates dropped, it was CDR Yamaha ‰Û÷s Dan Reardon who snatched up the first holeshot for 2016, followed by Mosig and Ferris who slotted in to second and third behind him.

After only one lap in the books, Ferris moved past his team mate Reardon, and demanded control of the race ‰ÛÒ Mosig after one lap was a notable absentee from the front, dropping back to 12th position.

The battle that had fan‰Ûªs eyes locked on the track though, was the fight for third position between Gibbs, Waters and Moss ‰ÛÒ the trio banging bars for a podium position, leaving no stone unturned.

After lap four, the running order changed dramatically, with Reardon sliding all the way back to fourth position, allowing Gibbs and Suzuki mounted Waters to fly past and snatch up second and third places behind Ferris.

At the half way point in moto one, Ferris‰Ûªs speed was unmatchable, leading from Gibbs and Waters in second and third. Following closely behind in fourth was Moss who had made his way around Reardon in fifth.

As racing progressed there was an exciting battle for the race lead, with Gibbs showing that his offseason injury was clearly no longer an issue ‰ÛÒ putting the pressure on Ferris and proving that race one was not yet over.

However, no one was able to catch the lightening fast CDR machine of Ferris, who eventually took the race one win ahead of Gibbs in second, and Moss who put on an outstanding performance to finish in third.

Reardon wrapped up his first race for 2016 in fourth, while Metcalfe managed to hold on to fifth position despite an in race penalty. In what was a shock finish outside the top five, Waters suffered a flat tyre which meant he eventually crossed the line in ninth, behind Mosig in sixth, and the Crankt Protein Honda Racing Team duo Dylan Long and Wilson who concluded race one in seventh and eighth places respectively. 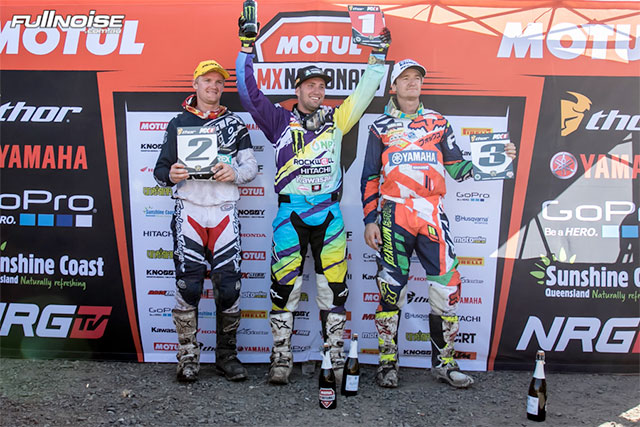 When race two kicked off for the Thor MX1 class, Mosig was out for redemption, and managed to snatch up the second hole shot of the day, ahead of Gibbs and Moss who slotted in to second and third.

After one lap, spectators were hanging over the fence cheering, with the top four of Mosig, Moss, Ferris, and Gibbs were all within a bike‰Ûªs length of each other, treating the thousands of fans to an epic final Thor MX1 battle.

After only three laps there was a change to the lead, with Moss managing to get by his teammate Mosig ‰ÛÒ relegating Mosig to second position, ahead of Ferris and Waters. Closely following the lead pack was Gibbs, DPH Motorsport‰Ûªs Lawson Bopping, and Metcalfe.

Unfortunately for Ferris, a small mistake in the whoop section of the track, saw the CDR Yamaha rider go down, forcing him to drop back to seventh place and on a time limit to make up valuable positions.

By the time the race had reached the half way point, riders had settled in to their respective positions, with Moss continuing to lead the way from Mosig, Waters, Gibbs, and Metcalfe who had found his way into an impressive fifth position.

By lap eight, Mosig had dropped back to third position, after Waters made his way in to second. Mosig then came under fire from a hard charging Gibbs, who also managed to make his way around Mosig and move in to third.

As the race reached it‰Ûªs closing stages, fans were once again treated to an exciting battle for second position, with Gibbs putting in a charge to find the rear wheel of Waters ‰ÛÒ the pair then banged bars for half a lap, before the defending MX1 champ made the move on Waters and moved in to second position.

By the time the last lap board was shown, Moss had a commanding lead on Gibbs, and was awarded the race win accordingly when the chequered flag flew. Second in moto two was taken by Gibbs, while Waters rounded out the moto two podium in third.

With a third place in race one, and the win in race two, Moss was awarded the Thor MX1 Round one win, ahead of Gibbs in second, while Ferris wrapped up round one of the in third.

‰ÛÏI didn‰Ûªt expect to come here and do this, I really just wanted to run my own race, but it proves that I‰Ûªve been training and working hard, and also that what we‰Ûªre doing as a team is working,‰Û