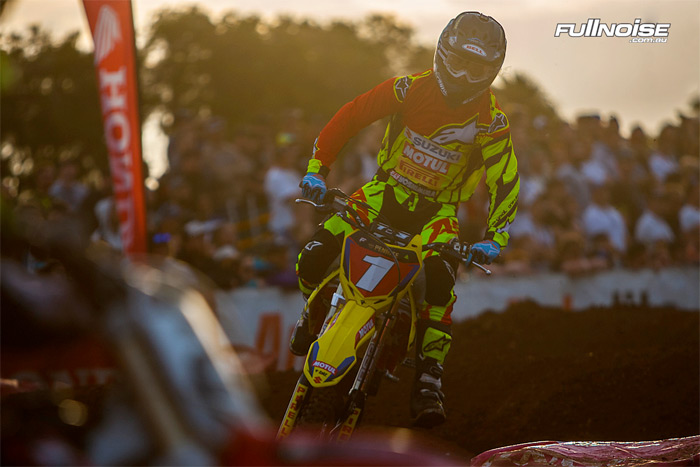 Reigning two-time SX1 champion Matt Moss is back in the saddle of his Team Motul Pirelli Suzuki RM-Z450 race bike and has his sights set on claiming an historic third straight Australian Supercross Championship when the 2015 title roars into life on October 10 at Bathurst, NSW, during the weekend of the Supercheap Auto Bathurst 1000 V8 Supercars race at Mount Panorama.

Moss, 27, has been sidelined from racing since July 19 when he was injured in an accident during the Shepparton, Victoria, seventh round of the 2015 MX Nationals championship.

Scaphoid and knee injuries were some of the most serious of the wounds he suffered, but now, almost eight weeks later, Moss gained the clearance to start riding again earlier this week and has taken to the training tracks with the throttle pinned.

"It feels so good to be back on the bike, awesome!" enthused Moss, who has ridden both motocross and supercross tracks this week as he fast works back to full fitness. "I'm feeling really good and have been keeping myself healthy during the time off the bike, so now that I'm riding again, I'm back to 100 percent straight away.

"I've already been pounding out the 20 lappers to get ready for Supercross."

After capturing the SX1 title in 2013, Moss enjoyed a sensational run through last year's championship, winning every single round to take back-to-back titles and stamp his absolute domination over the Supercross paddock.

"It was just one of those years when everything seemed to click into place," explained Moss of his 2014 Supercross campaign. "I felt good going into the championship and knew I had done all my training and my program was solid, so it was great to go through undefeated and get my name in the record books.

"I would love to do that again: when you achieve something once, you want to go and do it again."

With the announcement of a $120,000 prizemoney pool for this year's six round championship, and the presence of international stars Gavin Faith and Anthony Rodridguez for the entire series, along with global supercross superstars Chad Reed and James 'Bubba' Stewart who will contest round five at Sydney's Allphones Arena on November 28, Moss agrees the 2015 Australian Supercross Championship is shaping up to be one to remember.

"Any time we can get riders of the calibre of Chad or James to Australia is incredible," says Moss. "They are the best riders in the world and the Sydney event is going to be a stand-out, no question about it.

"But the whole series this year is really ramping up. There are international riders at every round and all the promoters are so hungry to make every round a huge success.

"The tracks are going to be awesome and I know the Queensland rounds will both have big USA-style tracks ‰ÛÒ the racing will be sensational.

"The whole Supercross vibe is really firing up."

And with that, Moss climbs back in the saddle of his RM-Z to hit the Moss Institute Training Facility's brand new Supercross training track to throw down another 20 lapper ... but gives one final, and perhaps most ominous, comment:

"I'll be going all-out for Supercross again this year," Moss offers. "I won't be leaving anything on the table, that's for sure!"

Top Image: Matt Moss on his way to a unbeaten 2015 SX1 Championship