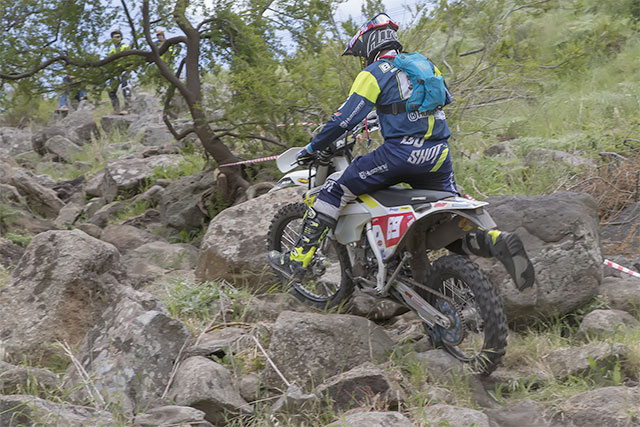 Former World Enduro Champion Mathias Bellino showed his plentiful class by taking his Husqvarna FE 450 to the fastest time in prologue at last Sunday's Husqvarna Wildwood Rock Extreme Enduro but after both his bike and body took a beating in the first three laps he decided to focus on his main purpose of his visit, the A4DE.

"I came here for the four-day mainly, but then (girlfriend) Jess was going to Wildwood, so thought maybe I can try to do it and it will be good training for next year. I have never done any cross-country extreme racing in my life, and next year we will have some cross-country included in the World Championship. I knew it would be a tough race for me, and also because the 450 is a little bit heavy for this application.

"I got the best lap time in Prologue and was leading for almost one lap when I got to the last uphill rock section. I crashed like four times and everybody caught me up and I lost a lot of time and energy. The bike is pretty wrecked! It was epic!

"On the second lap I broke my gearlever and then on the third lap I couldn‰Ûªt get through. It was too much for me, and I had to DNF unfortunately. I knew I didn't like XC races, now I‰Ûªm 100% sure it‰Ûªs not for me! I come from motocross and already for me enduro is a big step, but this is too much. A big thank you to Husqvarna in Europe, my team, and especially Husqvarna Australia for giving me the opportunity to ride in this race. I'm looking forward to the four-day.