Mastin closes in on Motul MX2 Championship with Toowoomba victory 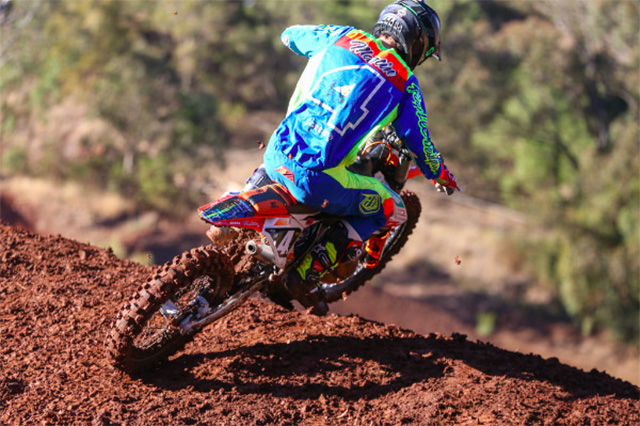 Davey Motorsport‰Ûªs KTM rider Egan Mastin has found his form when it truly counts, closing in on the Motul MX2 championship, and going undefeated once again at Round 9 of the Motul MX Nationals at Toowoomba today.

Once qualifying had concluded it was Davey Motorsport‰Ûªs KTM rider Mastin who topped the time sheets with a 1:51.471 lap time, from Serco Yamaha‰Ûªs Mitchell Evans (1:52.174) and KSF Husqvarna Racing‰Ûªs Dylan Wills who recorded the third fastest time late in the qualifying session (1:52.648).

Once riders lined up for their first moto of the weekend, spectators had flooded in to the venue, providing the Motul MX2 class with a huge audience for race one.

With championship leader Wilson Todd entering the round with only a 13-point advantage on Mastin, all eyes were on the pair as the gates dropped and bikes left the grid, but it was the two-stroke machine of Mastin who drag raced his way down the start straight to collect the first Raceline Holeshot of the day.

After the opening lap, Mastin shook off DPH Motorsport‰Ûªs draft-in Hayden Mellross who was back in second, while behind the pair, local MXD wildcard rider Kaleb Barham and Raceline Pirelli KTM‰Ûªs Jay Wilson were locked into their own battle for third.

Surprisingly after two laps, red plate holder Todd was back in seventh position, followed by Evans in eighth, allowing Mastin to further capitalise on his lead and his bid to secure vital championship points.

After six minutes, Wilson made the move on Barham and slotted up into third position behind Mellross, however it was Mastin who looked in a league of his own leading by five seconds with just over 20 minutes remaining.

With the front three checked out, the attention soon shifted to Evans and Todd who were desperately trying to navigate their way through the talented field. By lap five, Todd had charged through to fifth, while Evans followed suit passing Barham and moving up to sixth.

By the halfway point in moto one, Mastin continued to lead from Mellross, however both Wilson and third fastest qualifier Wills had begun to close in on the lead pair. DPH Motorsport‰Ûªs Todd continued to maintain fifth from Evans, Barham, and CRF Honda Racing Team‰Ûªs Kyle Webster.

After seven laps on track, Wills found the passing opportunity that he had been waiting for, making the move on KTM mounted Wilson and moving up into the final podium position.

As riders reached the 19-minute mark of race one, fitness and mental strength began to come into play, and with a championship on his mind, Todd began to close in on Wills and Wilson, and it only took a few laps for Todd to make the move on both riders and snatch up third position.

From there, once again Serco Yamaha‰Ûªs Evans followed suit, charging onto the rear wheel of Wilson, and within only a lap he too had made a pass on the 2015 champ. Unfortunately, Wills dropped his Husqvarna at a crucial moment and dropped back to sixth, the KSF Racing Team rider then forced to chase down the top five riders for the remainder of the moto.

With only two laps remaining, Mastin stayed well out of the carnage, leading by a comfortable margin from Mellross in second, and it was then that championship leader Todd, and Evans provided the of entertainment with a battle for the final podium position. The Yamaha pair went head to head for a full rotation before Evans made a vital pass on Todd, moving up to third.

But when the chequered flag flew, it was Mastin who celebrated across the finish line, taking yet another race victory and closing in on the MX2 championship. Second place went to Mellross, followed by Evans, Todd and Wilson who recorded his best finish of the season in fifth. Wills, Hamish Harwood and Webster all finished in sixth, seventh and eighth, while Barham and Raceline Pirelli KTM‰Ûªs Jayden Rykers completed the top ten. 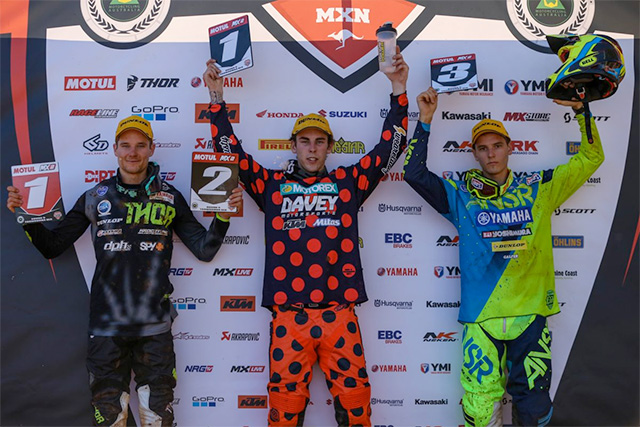 The Motul MX2 podium with Egan Mastin, Wilson Todd and itchell Evans . Photo: MXN Images
With the Motul MX2 championship tightening up after the opening moto, when bikes took to the line for the second and final race of the day, riders had everything to gain and plenty to lose.

When gates dropped, it was once again Mastin who used the two-stroke power to his advantage, claiming the Raceline holeshot. Following closely behind was Evans and Mellross, setting up the final moto as one of the best of the season.

A notable absentee from the front of the field once again was Todd, who after a full lap on track was back in sixth position. But it only took a short time for the red plate holder to find his feet, and after two laps charged up to third behind Evans and Mastin.

With the top three pulling away from the field, the attention shifted to the fight for positions behind them, and with only 20 minutes on the clock in the second moto, Harwood fought hard, closed in on Mellross‰Ûª rear wheel, made a pass, then slotted up in to fourth position.

After eight minutes on the picturesque Echo Valley circuit, Mastin continued to hold down the race lead from Evans and Todd, while behind the top three, Harwood led the charge for fourth between himself, Mellross and Wilson.

Unfortunately for Mellross, race two went pear shaped at the six lap mark. With Wilson closing in on the DPH Motorsport‰Ûªs rider, the pressure was high, and a small mistake in a turn saw him go down, and hand fifth place to Wilson.

With only a few laps remaining, Mastin once again looked flawless out in front, while Evans dropped off the pace slightly however continued to maintain second just ahead of Todd. But the question on everyone‰Ûªs lips was would today‰Ûªs result be enough to see Mastin enter the final round with the MX2 red plate.

With two laps remaining, it was clear that Mastin was riding on another level, leaving Evans and Todd to battle for the final podium positions behind him ‰ÛÒ and battle they did. With crucial championship points up for grabs, Todd made the move on Evans for second with only one and a half laps remaining.

But it was Mastin who‰Ûªs flawless performance saw him take the final race victory this afternoon, second went to championship leader Todd, while Serco Yamaha‰Ûªs Evans was forced to settle for third. Fourth place went to New Zealander Harwood, followed by Wilson who completed the top five.

Wills, Webster, Barham, Rykers, and Mellross all finished in positions six through ten in race two for the Motul MX2 class.

But with 1,1 race finishes for the second round in the row, it was Mastin who was crowned the Round 9 overall winner today, second place at Toowoomba went to Todd on a countback, while Evans completed the MX2 podium.

Todd now carries a slim three-point championship lead into the final round at Coolum next weekend.

‰ÛÏToday was awesome, I came out and did what I wanted to do, I did what I needed to do,‰Û