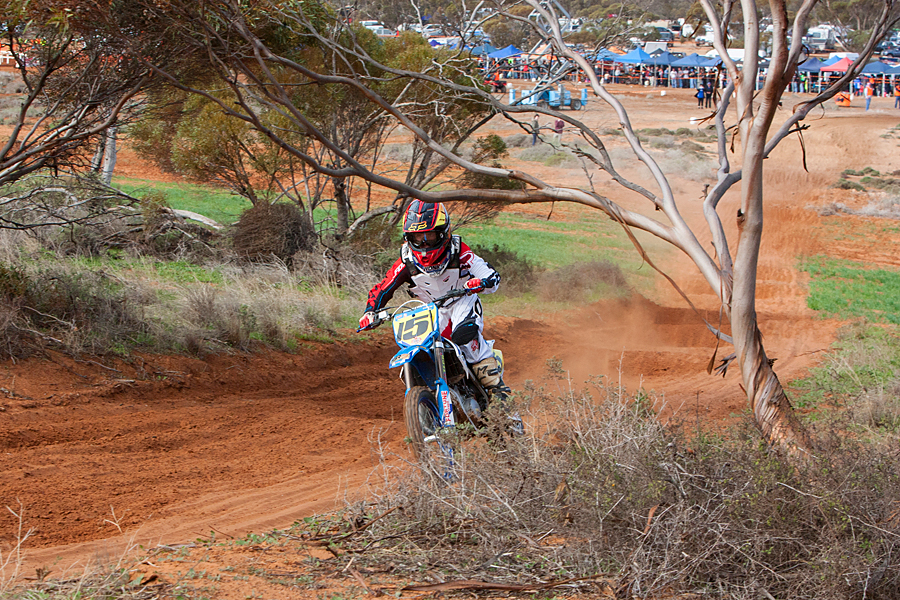 After qualifying on pole with a time some five and a half seconds ahead of his nearest rival, Semmens quickly established a big lead early in the first lap of the hour long race.

Setting consistently blistering laps times, the rider hailing from Hoddles Creek in Victoria continued to pull away from the field and after 8 laps and a total of 1 hour and 10 minutes on the bike, Semmens crossed the finish line just under 3 minutes ahead of the second placed rider.

"To win the Hattah desert race outright felt awesome as I trained hard for it and it paid off." Semmens stated after the event. "When the race started I didn‰Ûªt really expect to win because you never know who's going to be there and who's going to be fast.

"I just hoped that everything ran smoothly and I could have a good race," he added.

"The TM handled extremely well down the long straits and was pulling awesome, my dad and I did some testing and geared it up and jetted it to suit Hattah.

"My TM85 is fast and a very good handling bike and with the help from all-tech suspension it feels even better and the set up of the whole bike felt great.

With his Hattah win under his belt, Semmens will now turn his attention to this weekend‰Ûªs final round of the Victorian Junior Motocross Championships being held in Albury/Wodonga.

Semmens heads in to the final round sitting in second place in the A grade 85cc Small Wheel class, 17 points behind New South Wales rider Rhys Budd, and one point ahead of third placed rider, Queensland's Bailey Malkiewicz.

"Heading to the last round of the Victorian motocross titles at Albury I am hoping to get good results and hoping to come out with a couple of wins to finish the championship," said the Rosebud rider.

"I am also looking forward to the Australian titles at Horsham later in the year,‰Û