Mason Semmens Looks Forward to 2014 after a successful 2013 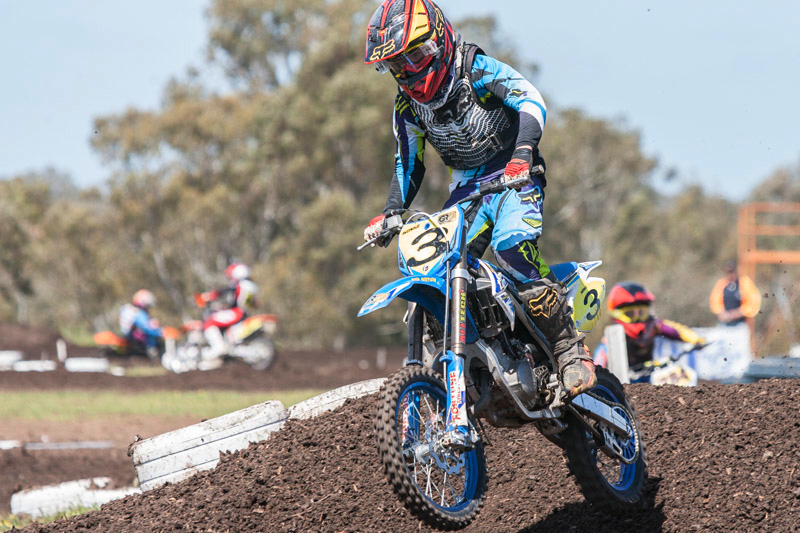 Top Notch Power Equipment TM MX85cc racers Mason Semmens has raced to an impressive third place finish in this years Australian Junior Motocross Championships held in Horsham Victoria from the 29th of September to the 4th of October.

After a couple of solid rides in his qualifying races Semmens lined up for the first of the three finals to be contested in the 9-under 12Yr small wheel 85cc class.

Things did not completely go to plane in the first final with a crash leaving the Victorian rider in 6th place when the flag flew to finish the race.

In the final two races Semmens produced his two best races of the week, firing out of the gate and going on to finish in third spot in final two, before finishing his championship assault off on a high with a second place finish in the final race.

Semmens 6-3-2 result was enough to see the up and coming star finish in a fantastic third place overall and only two points behind second place.

"It felt awesome to finish up 3rd at the junior Nats." beamed Semmens at the end of the weeks racing. "It has been a tough year and I was up against some very good riders.

"I had some good races during qualifying though I feel as though I could have done better in some of them but I'm happy how I rode.

"I have to give a big thanks my Mum and Dan and also John from Top-Notch Power Equipment. My TM 85 was handling great all week and a special thanks to the team at all-tech suspension for the set up, it was great.

With the 2013 season all but over for Semmens, he will turn his attention to riding some local grass track races and his home track at Frankston in order to keep his speed on pace as he steps up to the big wheel 85cc class in 2014

"I plan on doing a few Enduros and grass tracks as well has having a bit of fun riding Frankston and some other tracks around home to keep on the pace. I am moving up to the big wheel class next year so I'm going to have to train harder," he concluded.