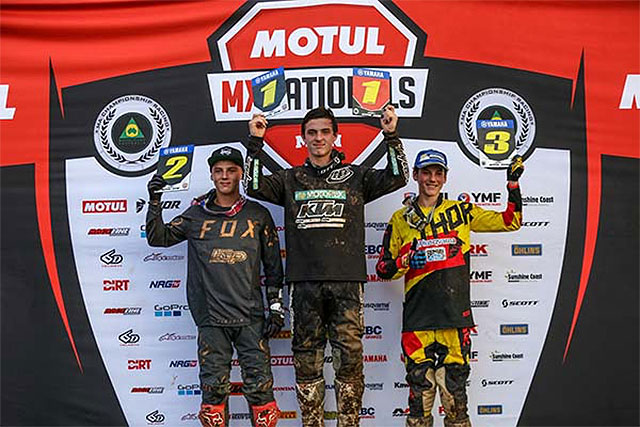 The future of Australian Motocross racing took to the track at Appin yesterday, with the Yamaha 250cc Junior Cup category showing off their skills as the support class for a packed house in New South Wales.

The youngsters of the sport had the chance to show the professional factory teams what they may be working with in the years to come yesterday, going head to head across two motos with KTM‰Ûªs Mason Semmens eventually taking the Yamaha 250cc Junior Cup class honours.

After qualifying in first position with a 1:51.152 lap time, Semmens was the man to beat in the feature class on Sunday, and when racing got underway the KTM rider proved to his competition that he was at Appin for business.

In race one, Semmens took the Raceline holeshot and led for the entire 15 minutes, crossing the finish line a comfortable 20.561 seconds ahead of KTM‰Ûªs Regan Duffy and Bailey Malkiewicz (Husqvarna) who finished in second and third places respectively.

In race two it was a familiar sight at Appin with Semmens once again putting his number 18 KTM machine up the front ‰ÛÒ leading from the gate drop to the chequered flag for the second time at Round 2. Second position in race two went to Budd aboard the Honda, followed by Malkiewicz, Kukas and Hayden Matterson who all finished inside the top five.

With a flawless score card after two motos yesterday, Semmens was rewarded with the top step of the podium at Appin, while Budd‰Ûªs 4-2 results handed him second overall, followed by Husqvarna mounted Malkiewicz who took the third step on the Yamaha Junior 250cc Cup podium.

‰ÛÏIt was a good day for us, the track was really tough and technical so I‰Ûªm happy to have finished 1,1,‰Û