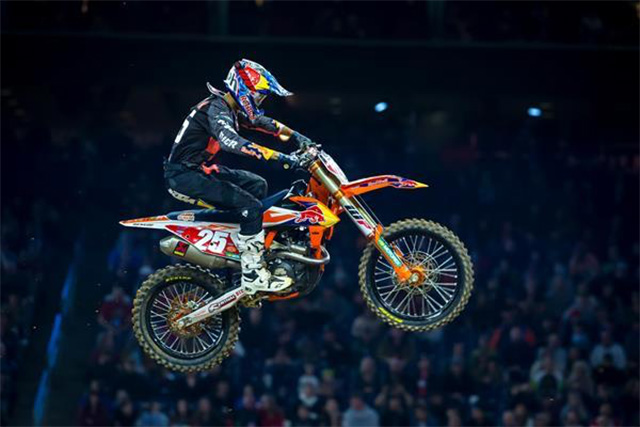 Following a stellar performance at the opening round, Red Bull KTM Factory Racing‰Ûªs Marvin Musquin experienced a tough evening in Houston for Round 2 of the AMA Supercross Championship as he sustained a shoulder injury during 450SX Heat 2 that caused him to sit out of the Main Event.

Musquin came into the second round with plenty of momentum behind him after winning the highly-anticipated opening round just one week earlier. The Frenchmen had a good day of qualifying, where he finished 3rd overall in the day‰Ûªs timed qualifying sessions.

In 450SX Heat 2, Musquin didn‰Ûªt get the best jump out of the gate but he quickly put himself into the top five early on. However, the Frenchman experienced a crash on lap five that ultimately took him out of the race with a shoulder injury. Despite all efforts to push through, Musquin was not able to line up for the Main Event.

"After qualifying 3rd today, I went down hard in the whoops in my heat race. I landed on my left shoulder and felt really beat up," Musquin explained "Unfortunately, I wasn't able to line up for the rest of night. I'm really disappointed about that given the team and I were in a good place after our win last weekend. But I will get checked up as soon as I get home and will know more in the next few days. Supercross is a longer season so I'm hopeful I will be able to line up in Anaheim 2.‰Û