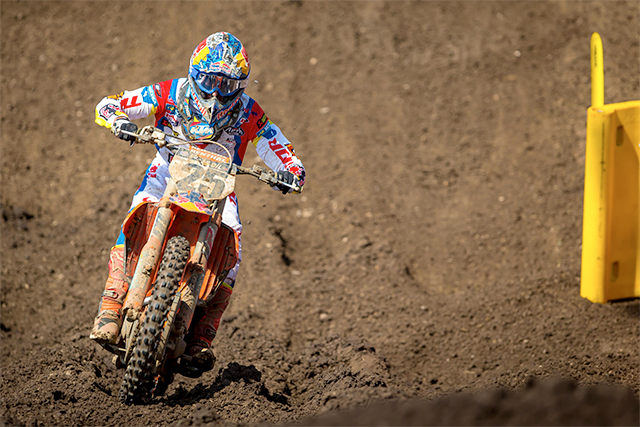 Red Bull KTM Factory Racing Team's Marvin Musquin is still battleing injury and struggled to stay in touch with the 450 class leaders at the fifth round of the AMA Pro Motocross Championship in Blountville, Tenn, last Sunday.

The Frenchman started strong despite a knee injury, but was unable to finish the second 450 moto due to rock damage sustained to his bike halfway through the moto.

Musquin was 11th at the start of the first 450 moto, made it into ninth by the third lap, and continued to charge. Pushing through a knee injury, he navigated into sixth with two minutes to go then fell back to seventh before battling with a large group of riders. He held his position and finished seventh. He was sixth at the start of the second moto and was riding strong. Unfortunately, he was unable to finish the race due to a rock that hit his brake caliper halfway through the moto. He ended up 14th overall on the day, and is currently fourth in 450 rider point standings.

"I ended up with a DNF in the second moto, which was disappointing," Musquin lamented. "I had a problem because a rock hit the brake. Overall it was a bit better than last week regarding the feeling in my knee, but it‰Ûªs still difficult.

"I was able to practice pretty well over the week, so that‰Ûªs what I‰Ûªm going to try and do again next week. I‰Ûªm going to keep working and will try to get better and stronger. It‰Ûªs tough because I‰Ûªm losing points in the championship, but it‰Ûªs mainly about me getting better.‰Û