Red Bull Straight Rhythm 2016 is done and dusted and Marvin Musquin has been crowned the Open class champion. After dominating the 2014 Lites class, Musquin entered this years event undefeated a trend he carried all the way to the 2016 title.

The first round of action saw the elite riders in the line-up get off to a great start to their evening, with Musquin, Ryan Dungey, Trey Canard, and Josh Hansen going undefeated. The battle of the round was between Austin Politelli and Deven Raper who took their battle to the night‰Ûªs first third run. Politelli would come out on top of that clash and advance to the quarterfinals. 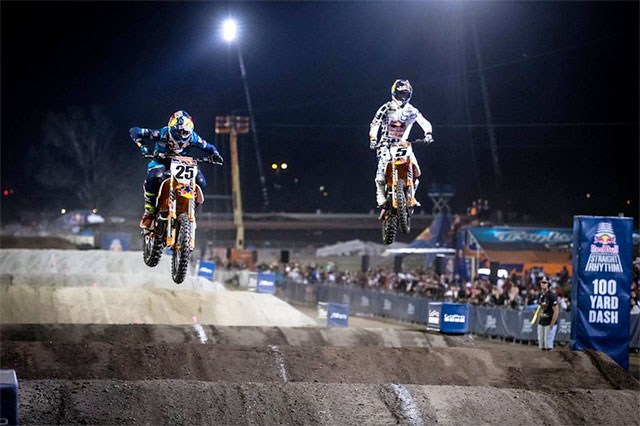 Marvin Musquin leads Dungey in route to victory å© Christian Pondella
In the quarterfinals Musquin again showed his speed, getting the best of Nick Wey to remain undefeated. The battle of the round came from Canard and Vince Friese‰Ûªs first run, which saw Friese come from behind in the last section and launch into the face of the finish line to nearly beat Canard. Canard would go on to win the round and move into the finals along with Dungey and Hansen.

The semi kicked off with an absolutely epic battle between Josh Hansen and Ryan Dungey. Hansen jumped out to an early lead and held it through the first portion of the track, sending the crowd to their feet. Dungey kept his cool and fought back through the whoops section, passing Hanny and putting a few bike lengths between them and it all came down to the final section. The no. 100 wasn‰Ûªt taking no for an answer; he left the throttle open off the last double launching himself past Dungey for the win by just two hundredths of a second.

Dungey would go on to win the next two runs and advance to the final, but not without a fight from Hansen. Musquin continued his undefeated streak through the semi finals besting teammate Trey Canard. Hansen and Canard would later meet to battle for third place, with Canard taking the first run. But Hansen was not to be denied, sending it for back-to-back wins in to bring home an upset third place.

Musquin came into the final looking to stay undefeated and he did just that. As the gate dropped on the first run, Marvin launched off the start and went on to take the win with a time of 40.2, besting his qualifying run by a fair margin. While Dungey did everything in his power to bring home the victory, the Frenchman proved unbeatable on this night, taking a commanding victory in the second run and sealing the deal for the 2016 Red Bull Straight Rhythm crown.

There are moments in racing that will go down in history, and the quarterfinals at Red Bull Straight Rhythm will be one of those moments. Josh Hill took to the gate aboard an Alta Motors Redshift MX, marking the first time in history that an electric motorcycle lined up at a professional motorcycle race. 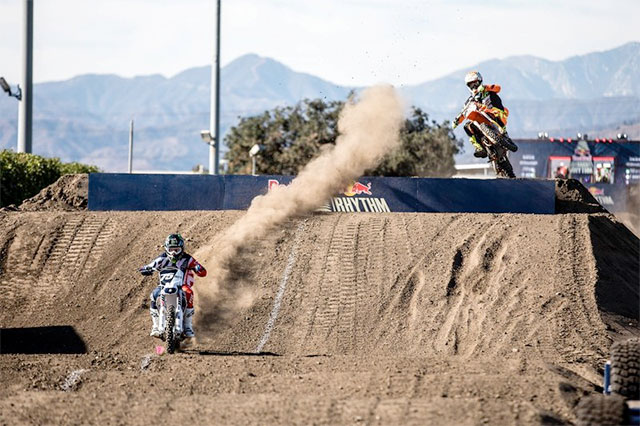 The Alta electric bike was a serious competitor å© Christian Pondella
While many fans were skeptical of the bike‰Ûªs capabilities, Josh Hill quickly put those doubts to rest by winning the first run of the best of three and then marching on to defeat Kyle Cunningham in a third run. While the electric bike turned heads, the one and only Ronnie Mac sobered up and made his attempt at the Lites class. While some might argue that the odds were stacked against him, Uncle Ron gave it his best shot against Jordon Smith and gave the fans a show they won‰Ûªt soon forget.

Josh Hill and his electric bike squared off against the Troy Lee Designs Factory KTM of Mitchell Oldenberg in the Semifinal round. Although the electric bike didn‰Ûªt come out on top, Hill kept Oldenberg honest, proving that the folks at Alta Motors have put together a machine that is more than capable of competition. Some of the closest racing of the night came from the semi battle of McElrath and Smith. The evenly matched duo traded victories on the first two runs, with Smith launching the biggest scrub of the event. In the end McElrath came out on top to headed to the final to take on Oldenberg.

It was a Troy Lee Designs KTM showdown in the Lites final as Shane McElrath took on Mitchell Oldenberg. McElrath came out of the gate with a head full of steam but Oldenberg kept him honest, launching out of the final rhythm section and slamming into the face of the finish line jump just missing out on the win. Entering the second run, it was quickly clear McElrath was not to be denied as he ripped his way to the win and the 2016 Lites class title.