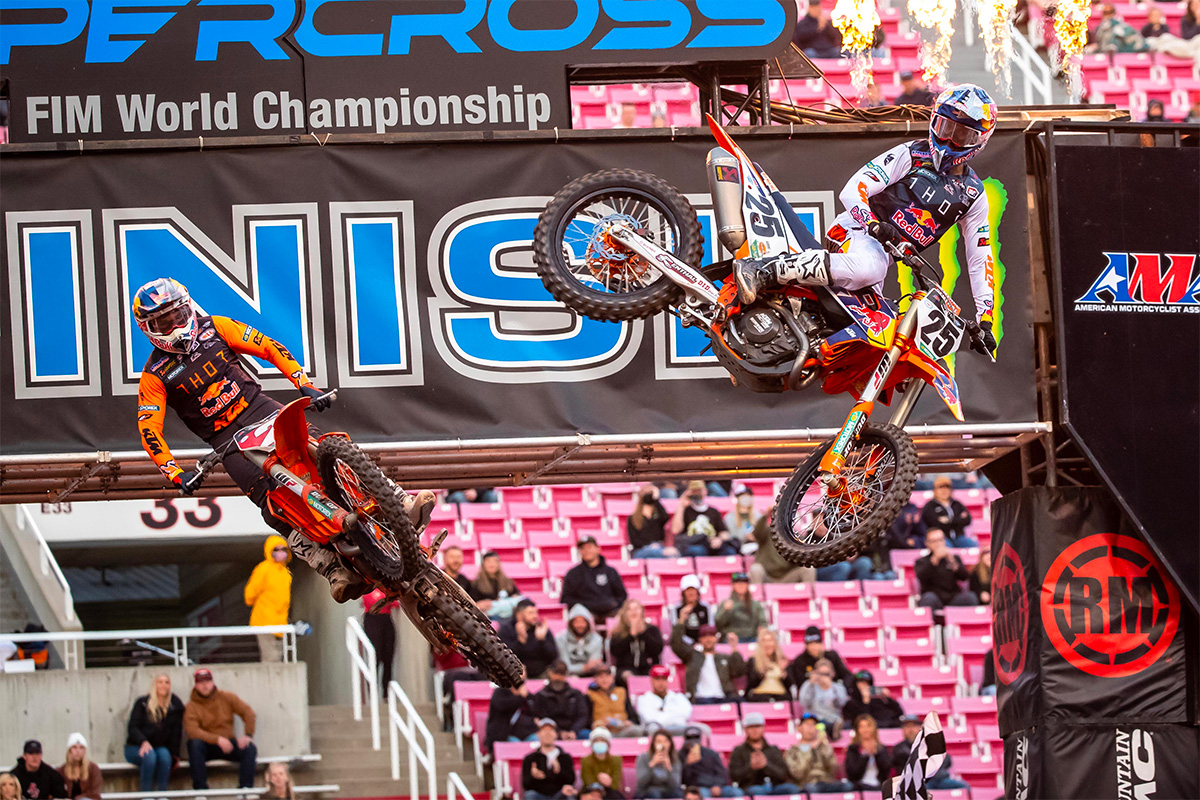 Marvin Musquin (#25) grabbed his first win since Round 12 of 2019. He used speed early and composure at the end to nab the win. Photo Credit: Feld Entertainment, Inc.
The Monster Energy AMA Supercross made a dramatic return to Rice-Eccles Stadium with a thrilling event at Round 16.

Marvin Musquin took the 450SX Class win, his first since 2019, with one round remaining in 2021. Cooper Webb crossed the checkers right on Musquin's real wheel for a second-place finish and Malcolm Stewart earned his career-first 450SX Class podium with a third-place finish in front of the limited-capacity, pod-seated fans inside the open stadium. The Eastern Regional 250SX Class racers returned to racing after a 10-week break and Jo Shimoda earned his first ever-win with a display of speed and composure under pressure to take the championship battle to the final round. When the gate dropped for the 450SX Class Main Event it was Ken Roczen who grabbed the holeshot and immediately took control. Roczen sat second in the title points, down by 16 to Webb, and looked completely in command as Webb struggled to recover from a ninth place start. Musquin sat in second and lost time to Roczen in the early laps as defending champion Eli Tomac tried to fight forward from just inside the top ten after a bad start.

Webb moved quickly up to fourth with Malcolm Stewart putting heavy pressure on him, making several near-passes as the two tried to climb forward to reach third place being held by Jason Anderson. Two and a half minutes into the race, Webb sat 5.7 seconds and seven championship points back from Roczen when Tomac had a tip over and dropped back more spots, remounting nearly outside of the top ten. 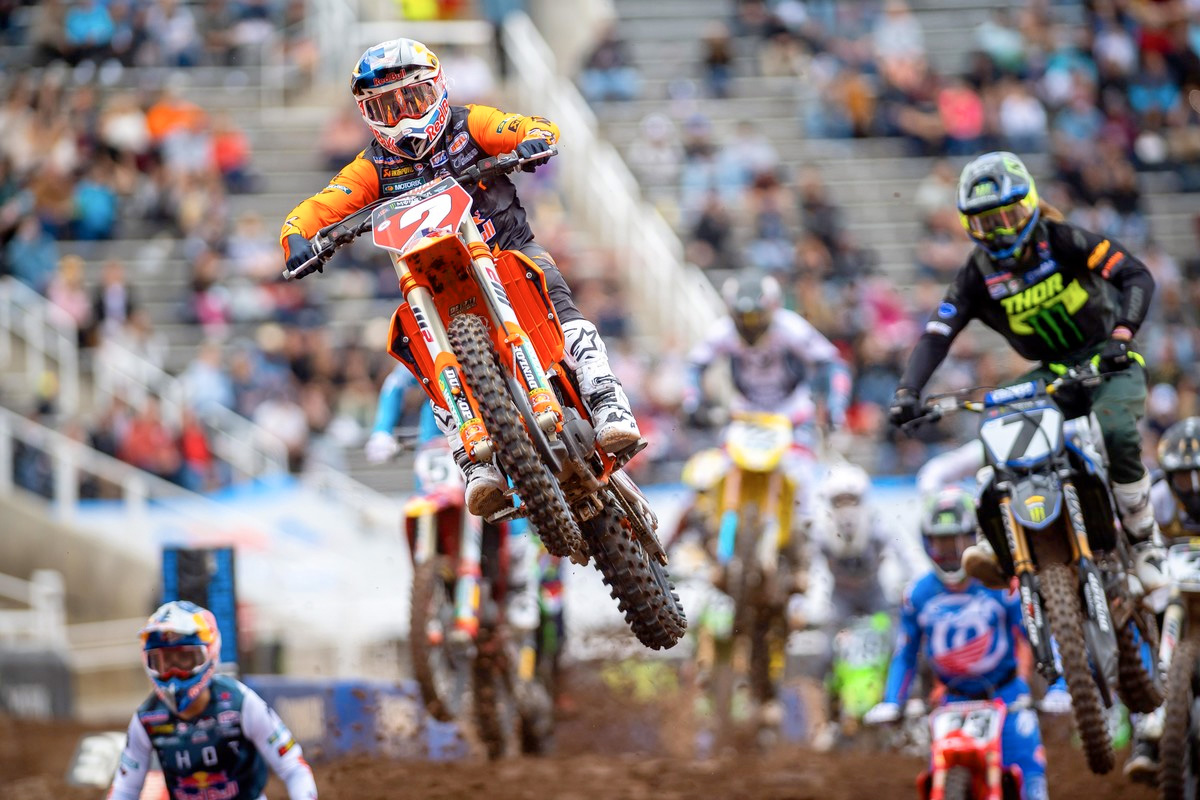 With a solid second-place finish, Webb was able to collect valuable points to carry a 22-point lead into the series finale next weekend. Photo Align Media
At the race's midpoint Musquin began to chip away at Roczen's lead as Webb contended with the constant pressure from Stewart and inched closer to Anderson. With less than ten minutes left on the clock in the 20-minute plus one lap race Webb got around Anderson and into a podium spot. Then Roczen make a mistake exiting the corner before the whoops and went down, dropping him to fifth and handing the lead over to Musquin.

Webb broke clear of other riders as he slowly reeled in KTM teammate, Musquin, who was navigating through the lappers. Musquin held his pace and his position and brought home the win, his first since 2019, with Webb following in second and Stewart completing the podium in third. The finish marks Stewart‰Ûªs first career 450SX Class podium finish.

‰ÛÏI can‰Ûªt believe it right now ‰ÛÒ I‰Ûªm standing on the top of the podium. I have had some struggles this season but my goal is to come back and keep getting better. There are so many good riders, so the start is super important and I was just trying to be consistent, those whoops were really tough. I‰Ûªm so proud, I gave it my all tonight.‰Û 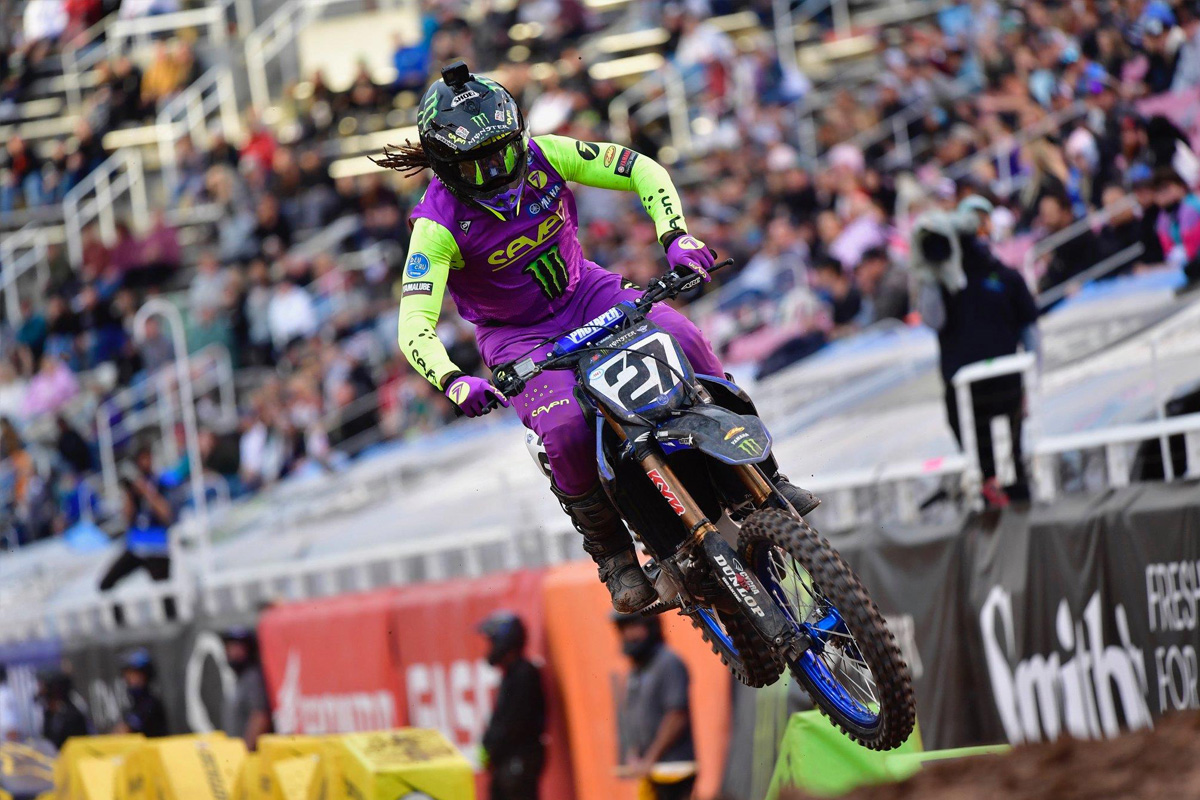 ‰ÛÏI'm just so stoked to finally get on the box," Stewart enthused. "It‰Ûªs been hanging over my head for a long time, and we finally got it. We finally did it! It‰Ûªs a dream come true. It‰Ûªs one of those moments I‰Ûªll never forget. Everybody says that after your first one, it comes easy, so this is one of many. I‰Ûªm looking to have some more fun next weekend and go out here for a repeat.‰Û 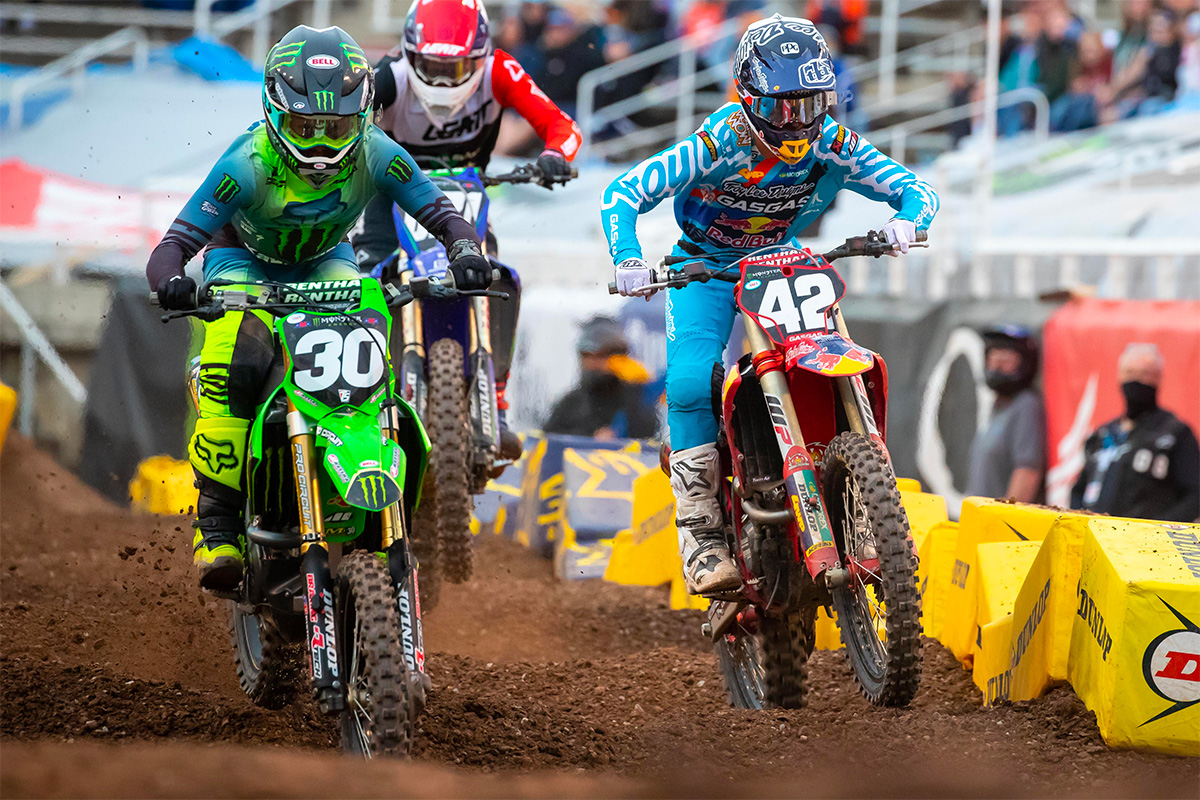 Jo Shimoda (#30) took his career-first win after meeting the challenge of heavy pressure from two riders, including Michael Mosiman (#42). The dramatic victory marked the first for a Japanese rider. Photo Credit: Feld Entertainment, In
The Eastern Regional 250SX Class delivered a history-making nail-biter. Jo Shimoda, a late add to the Monster Energy Pro Circuit Kawasaki team this year, grabbed the holeshot and held the top spot despite repeated attacks by two separate riders throughout the 15-minute plus one lap race. First it was Michael Mosiman who tucked a wheel under Shimoda several times, and in fact pulled alongside through one rhythm section, but Shimoda would not be denied the front spot and bumped his way right back into the lead in the next bowl turn.


With under four minutes on the race clock Australian Jett Lawrence caught and passed Mosiman and set his sights on Shimoda. The Honda rider pressured the Kawasaki rider right down to the checkered flag, but Shimoda had ice water in his veins and never made more than the smallest mistakes as he weaved through lapped riders on the tight Utah track.

Shimoda earned his first Monster Energy Supercross win, making him the fourth winner in the division this year and also making history as the first Japanese racer to step atop the podium. Sweeter still, his family was in Utah, visiting from Japan, and able to witness the race thanks to the efforts made to allow fans in the seats in 2021. The win adds Japan to the list now of nine countries to have won a Monster Energy Supercross race.

‰ÛÏI want to thank my Monster Energy/Pro Circuit/Kawasaki team for setting me up with the best bike and helping me get the win tonight," Shimoda said. "I also want to thank my family who is actually here from Japan tonight, it makes it even more special to get this win with them here watching. I moved out to the U.S. from Japan without most of my family and it‰Ûªs been such a great opportunity racing here, but to get a win, it‰Ûªs a dream come true. I went out there and rode my best all day long and I‰Ûªm already looking forward to our last race next weekend for the East/West showdown.‰Û 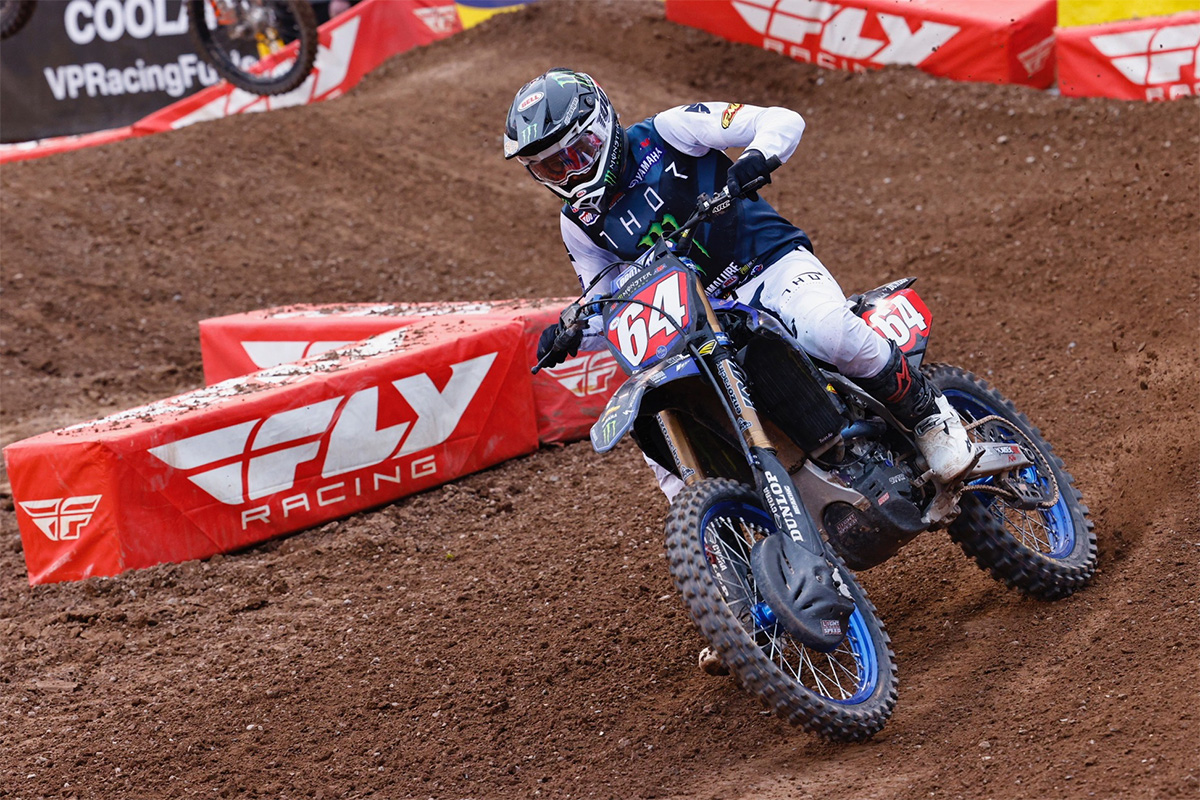 Colt Nichols battled back to third to keep his podium streak rolling on a tough night at Saturday‰Ûªs penultimate round in Salt Lake City, Utah
Colt Nichols, the red plate holder, needed to only gain two points on Shimoda going into the Main Event to wrap up the title one round early. Nichols crossed the holeshot stripe outside the top five and although the fastest rider on the track at several points, was slow to climb through the pack. Nichols managed a third-place finish, taking the title to the final race, the always unpredictable Dave Combs Memorial East/West Showdown.

‰ÛÏI don‰Ûªt even know what to say. It was a good night, getting on the podium, so that‰Ûªs always awesome. It‰Ûªs just been a roller coaster of emotions kind of day, we came into this battling my teammate and we were looking to have two really good races here in Salt Lake City, me and him going head-to-head with only eight points separating us, so it was unfortunate that he crashed out and ended up hurting his ankle. That just puts you in a weird spot," Nichols said.

‰ÛÏI needed to execute a little better in the main and I didn‰Ûªt. I got a horrible start which made it hard on myself and I had to come through the pack. I felt like I didn‰Ûªt start riding very well until about 10 minutes into that main and then I started to get going. I just waited around too much. In order to wrap it up tonight, the one guy I didn‰Ûªt need to win was Jo (Shimoda), and he did. Looking at the big picture it‰Ûªs good, though. If you would have told me I would have had a 23-point lead going into the final round, I‰Ûªd be pumped. So overall, it‰Ûªs awesome to be so close. We‰Ûªll try again next weekend.‰Û