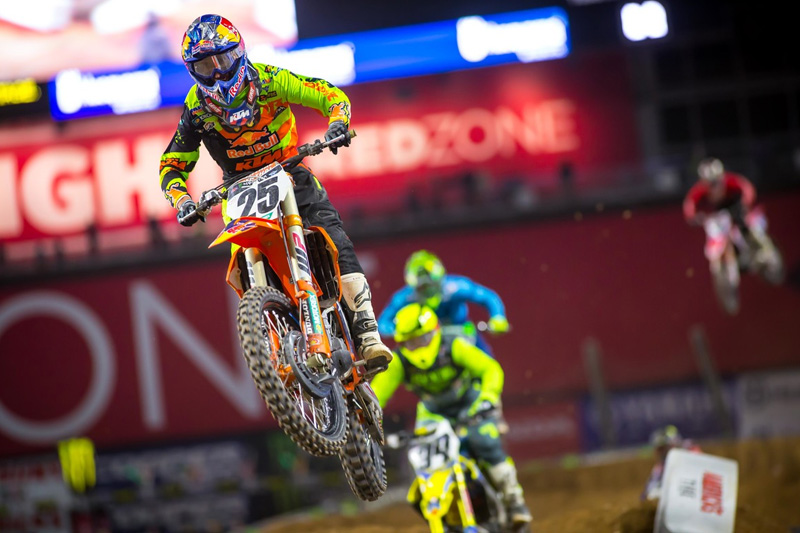 Red Bull KTM Factory Racing Team‰Ûªs Marvin Musquin continued to battle back from an early season shoulder injury on Saturday night as he earned a top-five finish at Round 4 of the AMA Supercross Championship in Glendale, Arizona.

Musquin, still rehabbing a shoulder injury sustained at Round 2, had a slow start to his race day with a 6th place finish in 450SX Heat #1. Despite a bad start in the heat race, Musquin‰Ûªs steady performance gave him a transfer position into the Main Event.

In the 450SX Main Event, Musquin got off to a top-ten start early on the opening lap but he quickly charged his way up to the 5th place battle, where he engaged through the first half of the race. Musquin eventually made his way up to 4th just after the halfway point but the French rider was ultimately passed by a hard-charging Jason Anderson late in the race.

Still finishing strong despite his setbacks, Musquin maintained his top-five position throughout the 20-lap Main Event to ultimately finish 5th.

"Given the last few weeks and all the rehab work I've put in to strengthen my shoulder, I'm happy with 5th place tonight," Musquin said. "I was able to get a reasonable start around 8th and just tried to put in solid laps until the end. I‰Ûªm happy to make good gains this week and I look forward to building from here.‰Û 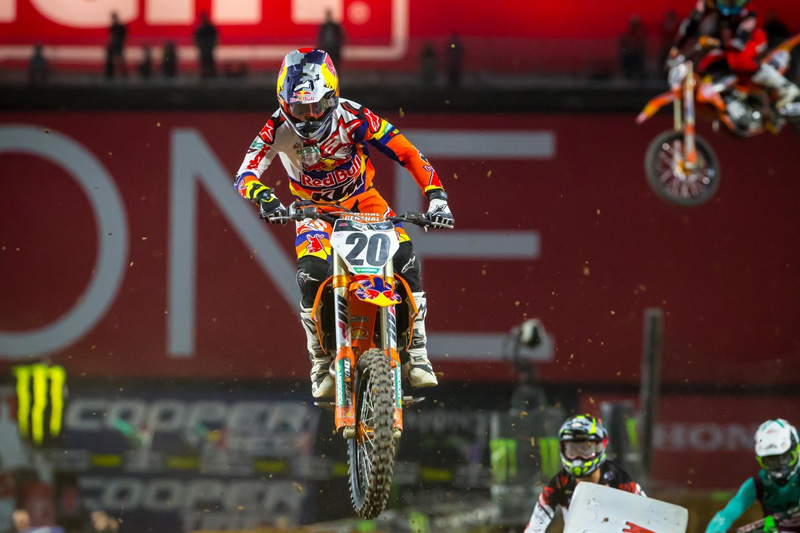 After a tough start to the main Brock Tickle climbed back up to 12th. Credit: Simon Cucby
Musquin's Red Bull KTM Factory Racing Team‰Ûªs Broc Tickle set himself up in a favorable position during the 450SX Heat #2 as he qualified 5th place into the Main. However, as the gate dropped for the Main Event, Tickle didn‰Ûªt get the best jump and he was forced to the back of the pack where he came around the opening lap in 18th place.

Tickle immediately put his head down and began picking off riders where he ultimately finished 12th overall after 20 laps of racing.

‰ÛÏOverall it was a positive end to the night in the Main Event," Tickle said. "I think riding-wise I gained some confidence and felt a lot more comfortable on the bike, so I‰Ûªm really happy with that. I need to work on my starts but from there I‰Ûªm feeling really good on the bike. I think we can tweak a couple more things here and there to be better in other places but overall I‰Ûªm happy with the progress on the bike.‰Û