Marvin Musquin Gets First Moto Win Of The Year 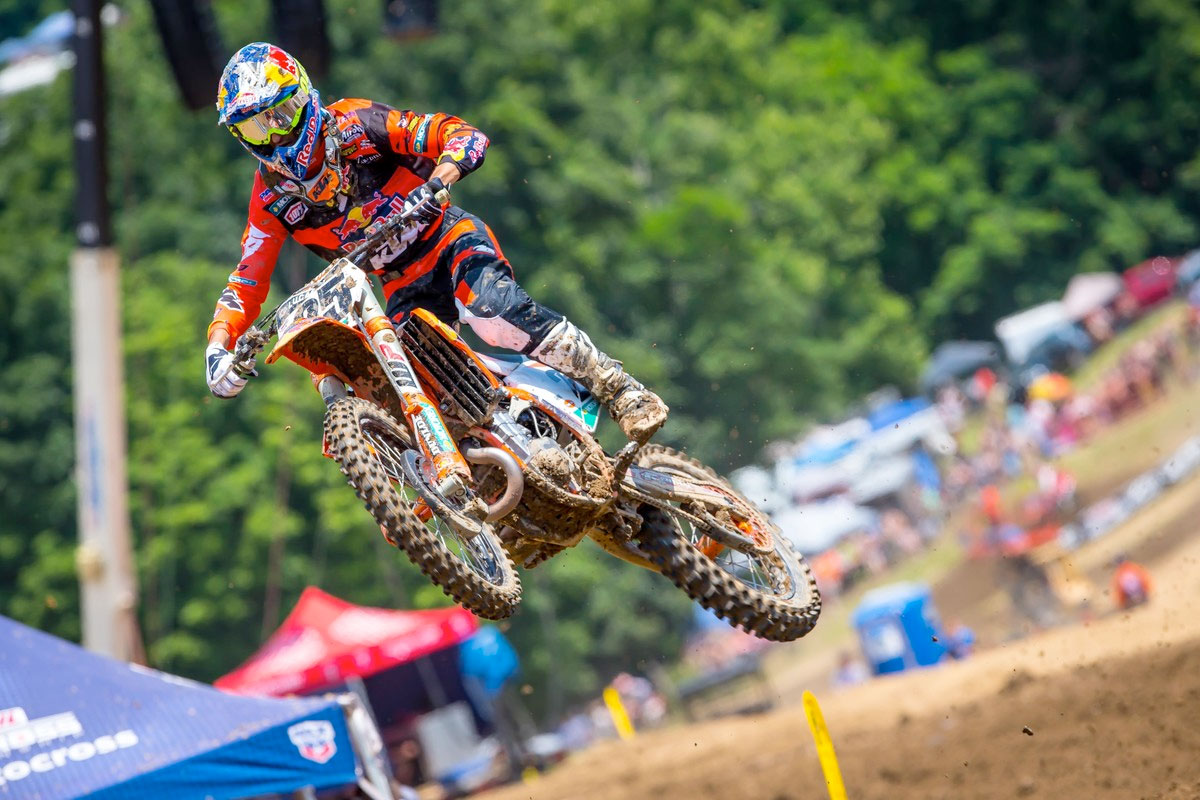 Moto 1 at High Point saw Musquin pass unbeaten championship leade Eli Tomac in the final laps to take his first Moto win of the year. Photo: Simon Cudby
Marvin Musquin showcased great speed and determination on Saturday as he emerged from Round 4 of the Lucas Oil AMA Pro Motocross Championship with his first moto-win of the season, followed by a hard-fought second place ride to claim second-overall at the High Point National.

Held in Mt. Morris, Pennsylvania, the High Point served as the series‰Ûª first stop on the eastern half of the U.S., bringing some of the warmest temperatures and humidity of the season, combined with rough and rutty track conditions. It was a challenging day all-around but Musquin and the Red Bull KTM Factory Racing Team rose to the challenge as they continue to battle for the 450MX Championship in 2018. 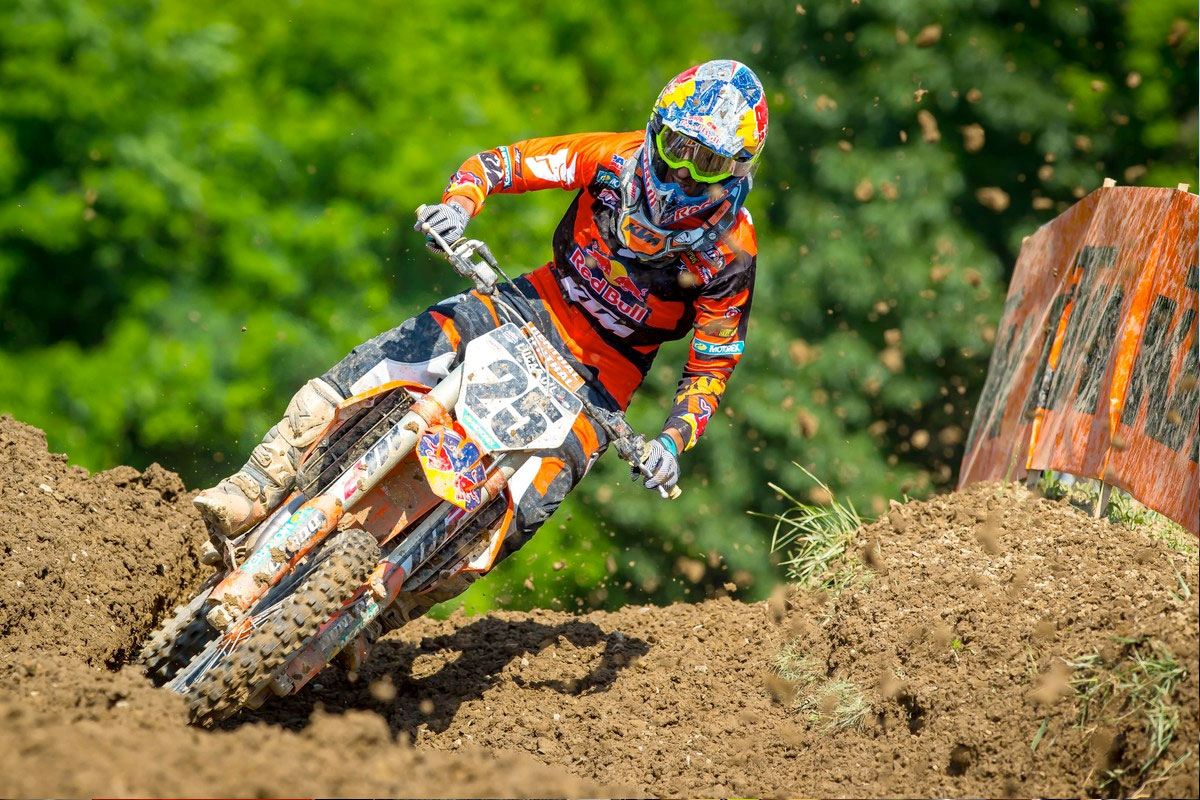 Musquin remains in second place in the standings and as he tied on points with Tomac never lost ground in the championship chase. Credit: Simon Cudby
In 450MX Moto 1, Musquin placed his KTM 450 SX-F Factory Edition into second off the start and he battled early on with Justin Barcia. Side-by-side through the corner, Musquin was forced off the track and through the banners, dropping him back to third place briefly. He quickly regrouped and responded with the fastest lap time of the race as he reclaimed second-place indefinitely on lap five. Musquin kept his momentum rolling and charged his way up to the leader, Eli Tomac. After a quick battle, Musquin overtook the lead on lap 12 and never looked back, claiming his first moto-win of the season in Pennsylvania.

In Moto 2, Musquin once again put himself into a favorable position off the start where he sat patiently in third early on before powering his way up to second on lap five. From there, Musquin put forth another impressive charge to close the gap on Tomac‰Ûªs lead and he applied great pressure heading into the final laps. As the clock ran down from 30 minutes of racing, Musquin increased his intensity with several attempts for the lead. The two riders came into the final lap bar-to-bar for the overall victory and despite a hard-fought effort, Musquin wasn‰Ûªt able to make a pass that would stick as he finished a close second in Moto 2.

"The first moto I was really comfortable behind Eli and I was relaxed but in the second moto I could tell Eli picked better lines, had a better rhythm and he was on it." Musquin explained. 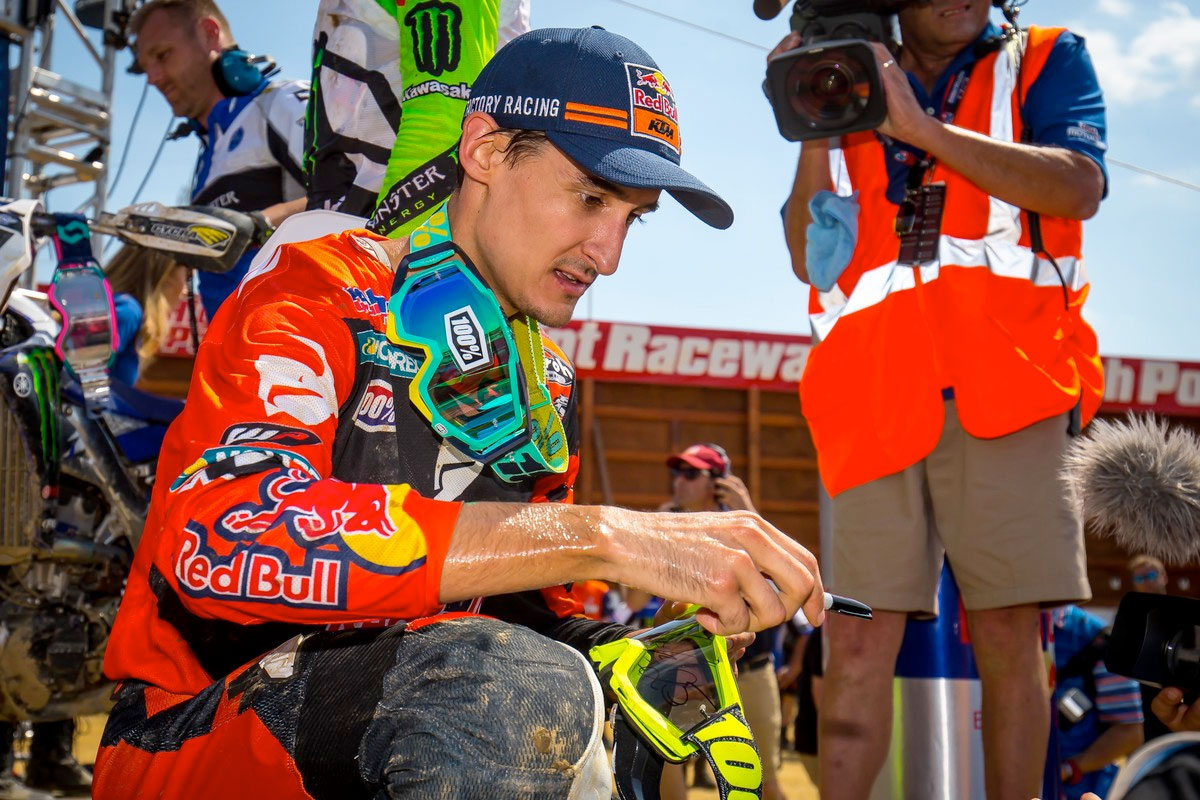 Musquin enjoyed the battler with Tomac in moto 2 but couldn't make a pass by the time the chequered flag fell. Photo: Simon Cudby
"It was really hard to duplicate the first moto, that‰Ûªs all. That was my goal but unfortunately, I came up short. Obviously in the first moto I had better lines and I was able to capitalize on that, but not second moto. I gave my best, I fought really hard and the crowd was going crazy all around the track and that‰Ûªs what we want, we want a battle like that.

"I‰Ûªm really proud of the effort I gave today. I‰Ûªm happy to win first moto ‰ÛÒ unfortunately I got second overall ‰ÛÒ but it was a great result and I showed good speed today," the Frenchman concluded.

Musquin now sits second in the championship, 28 points behind championship leader Eli Tomac, and 29 points ahead of third placed Justin Barcia in third. 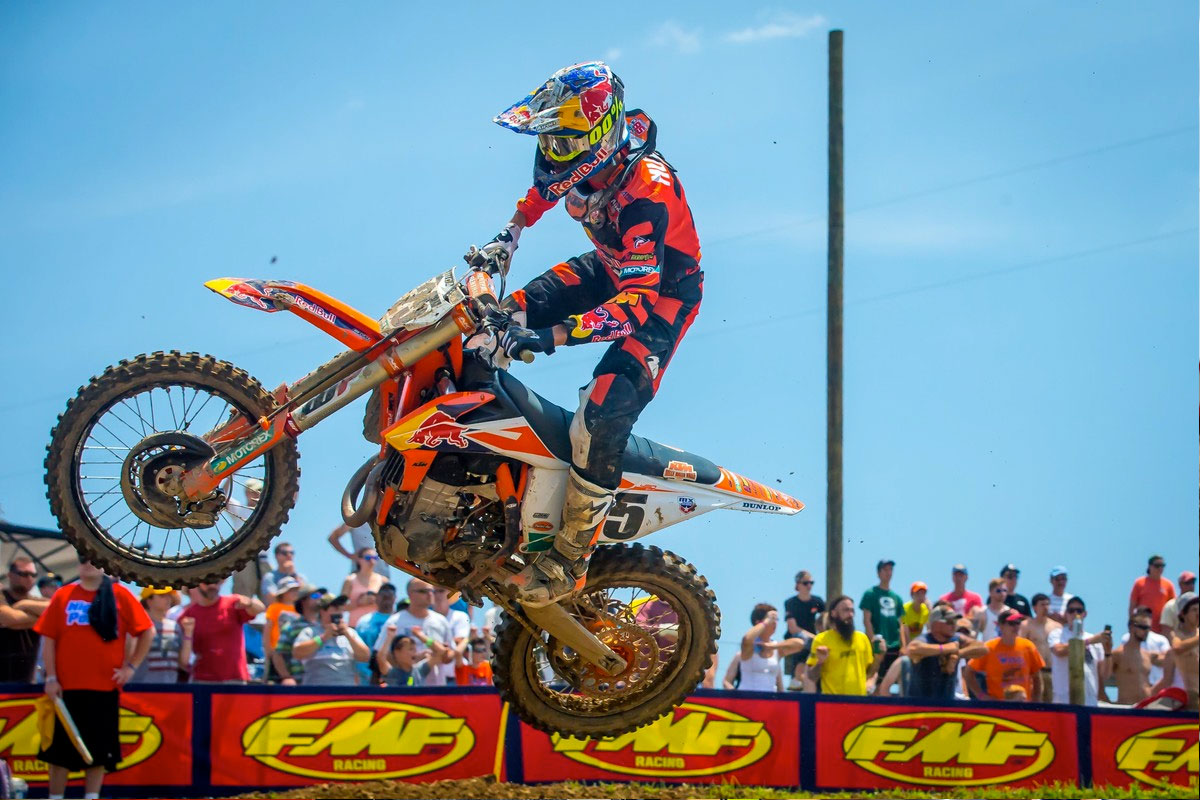