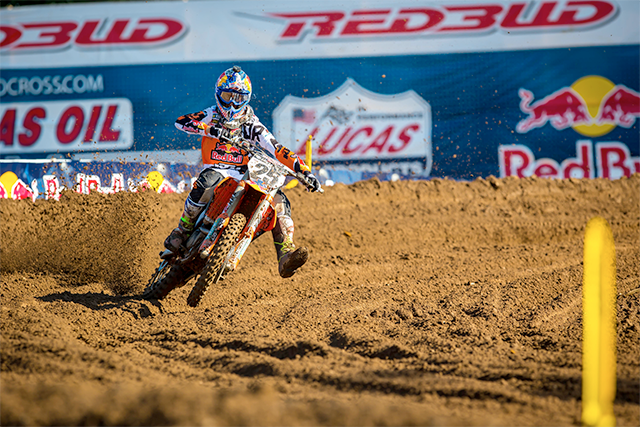 Red Bull KTM Factory Racing Team‰Ûªs Marvin Musquin regained his early season momentum by returning to the podium at the RedBud National, the sixth round of the AMA Pro Motocross Championship, with a strong 3-3 ride in front of packed house of passionate RedBud race fans.

Marvin Musquin was second at the start of the first 450 moto and put on a charge. He held his ground during a four-rider battle in the third lap and continued to stay within striking distance of the leader. He made the pass for the lead in the fourth lap and rode hard. He moved back to second in the sixth lap but continued to push, staying within a few seconds of the leader. He battled for position with Blake Baggett with three minutes to go and would eventually come out in third where he finished. He was top-10 at the start of the second moto and came out of the first lap in sixth. He charged into the top-three after the halfway mark and continued to push. He put on a consistent ride and finished third. The 3-3 finish gave him third overall on the day, and he is currently fourth overall in 450 rider point standings.

"My speed is getting better and my confidence is back," Musquin said. "It was a much better weekend for me. It‰Ûªs crazy how much you can lose with an injury like that, but I‰Ûªm getting my strength back.

"It was a difficult time but I feel like I‰Ûªm getting better. I put in some good laps during practice and was able to turn left again. My stomach was cramping up during the first moto, but it was better during the second moto. I couldn‰Ûªt really get going in the second moto, though. I needed to get around those guys because Eli and Jason were going fast up front. I lost some time there. Overall it was a good day, and getting third is good for my confidence.‰Û