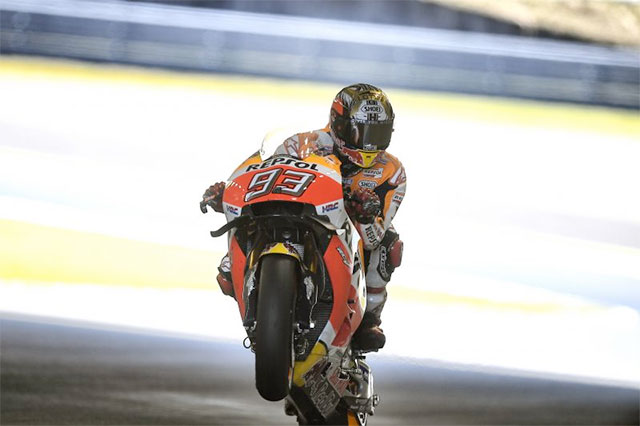 Repsol Honda Team‰Ûªs Marc Marquez has taken the 2016 MotoGP World Championship at the home of Honda ‰ÛÒ with the hand dealt by the Japanese venue seeing the cards fall perfectly for the Spaniard as Movistar Yamaha teammates Valentino Rossi and Jorge Lorenzo crashed out of contention.

First was Rossi, into the gravel early ‰ÛÒ before Lorenzo‰Ûªs ride through the pain barrier after a highside on Saturday was cut short; sliding out of second in the last few laps. Marquez, clear at the front, kept it on the road to take his third premier class title in four years, and his fifth victory of the year.

With a slow start for polesitter Rossi, it was Championship leader Marquez who got the holeshot into Turn 1 ‰ÛÒ before reigning Champion Lorenzo quickly took the lead at Turn 2. With Rossi getting past Marquez soon after, Aleix Espargaro (Team Suzuki Ecstar) then took advantage to take the Italian legend. Rossi fought back, before a duel between the Movistar Yamaha of Rossi and the Repsol Honda of Marquez saw the two switching positions in an early battle for honour. 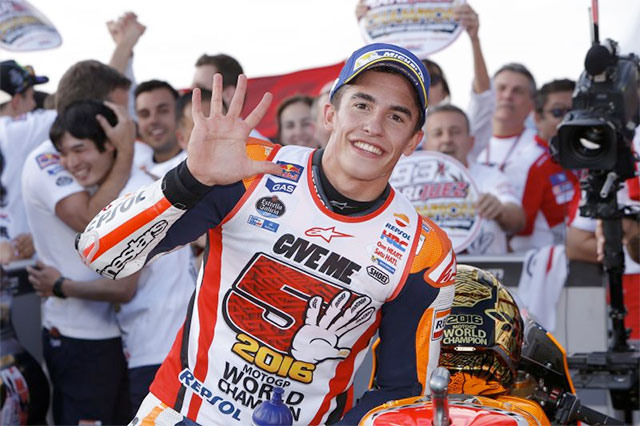 5 Chamionships for Marc Marquez
A crash for Eugene Laverty (Pull&Bear Aspar Team) then saw the Irishman out the race early on ‰ÛÒ his first DNF of the year ‰ÛÒ as the top three of Lorenzo, Marquez and Rossi held station at the front, and Motegi prepared the coming twists in the tale.

Rossi was first to fold, as the 9-time World Champion made a mistake and lost the front end of his Movistar Yamaha ‰ÛÒ leaving teammate Lorenzo as the last man standing in between Marquez and the crown. The status quo between the two remained, with Marquez in a clear lead, as battle raged behind.

Maverick ViÌ±ales (Team Suzuki Ecstar) broke away from an early fight with LCR Honda‰Ûªs Cal Crutchlow to get on the hunt back towards the podium, with teammate Espargaro falling back into his clutches as Andrea Dovizioso (Ducati Team) began to hunt down Lorenzo.

‰Û÷DesmoDovi‰Ûª made some inroads, with Lorenzo getting closer and closer, before an uncharacteristic error from the reigning World Champion saw him follow teammate Rossi in crashing out ‰ÛÒ a painful trip through the gravel after a highside in FP3 had left the Mallorcan bruised and riding through the pain barrier. Marquez‰Ûª pit board informed the number 93 of the unbelievable situation he now found himself in: a handful of laps, a third crown, and glory once again at the home of Honda. Dovizioso follwed the new Champion over the line for a P2 finish, with ViÌ±ales completing the podium in another impressive ride.

Cal Crutchlow came home in fifth as top Independent Team rider once again, with rival for that title, Monster Tech 3‰Ûªs Pol Espargaro, just behind in sixth. Alvaro Bautista (Aprilia Racing Team Gresini) impressed with seventh for another great result for the Noale factory, with teammate Stefan Bradl compounding the joy for Aprilia as he completed a double top ten finish in P10. Octo Pramac Yakhnich pairing Danilo Petrucci and Scott Redding were the remaining puzzle pieces in that top ten, in P8 and P9 and only three tenths apart over the line.

‰ÛÏIt's incredible. Before the race I did not expect to be champion, and I said that here it would be impossible," Marquez said. "However, when I saw that Rossi was out of the race, I decided to push hard for the victory. I was riding my hardest and, when there were 3 laps to go, I have read on my pit board that Lorenzo was also out -and on that lap I made mistakes at 4 or 5 corners, as it was difficult to stay focused.

"I am very happy because this title is very special, after last year, and also because it is has come at Motegi, Honda's home. It is great for my team and, of course, I don‰Ûªt want to forget my grandmother, who passed away this year and would be very happy with this World Championship.‰Û