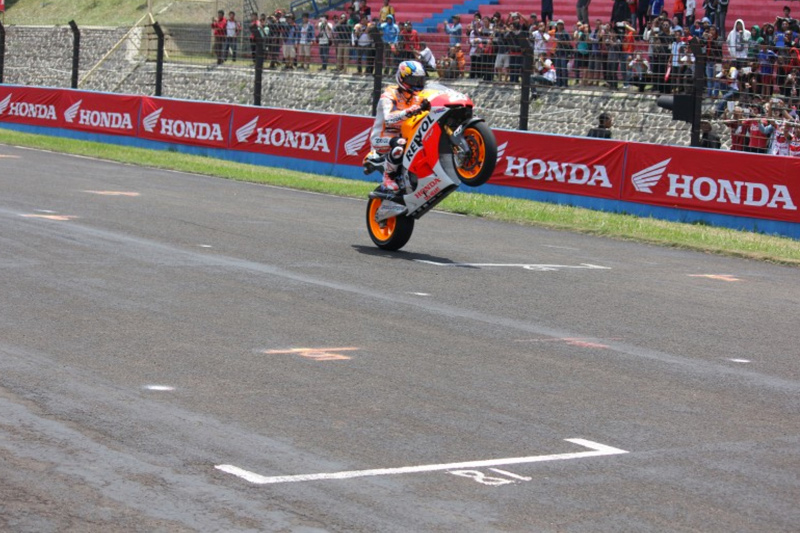 2014 World Champion Marc Marquez has won his 12th race of the 2014 season and secured Honda‰Ûªs fourth consecutive Constructors Title with Victory at the Sepang on the 26th of October.

Repsol Honda's Dani Pedrosa who started from 2nd on the grid, leap frogged teammate Marquez from the start and led the race entering turn one as Marquez had a brief encounter with Movistar Yamaha's Jorge Lorenzo and briefly dropping down to 8th.

As the riders crossed the line at the end of the first lap, Lorenzo had taken the lead from Pedrosa with Marquez already up to 6th position. On lap two, Marquez continued to storm through the field ‰ÛÒ setting a new record race lap (2‰Ûª01.150) ‰ÛÒ and passing LCR Honda's Stephan Bradl and Ducati's Andrea Dovizioso to move up to 4th.

In the final corner of lap two Pedrosa made a small mistake and lost the front, crashing out at a fairly low speed. He was able to remount the bike and rejoined the race in 20th.

On lap ten, Marquez passed Lorenzo, who had lost the lead to his teammate ‰ÛÒ and then on the final corner Rossi ran slightly wide and Marquez was able to make a pass on the Italian. Meanwhile Dani had moved up to 11th place but on lap thirteen he lost the front in turn nine and this time was unable to restart. 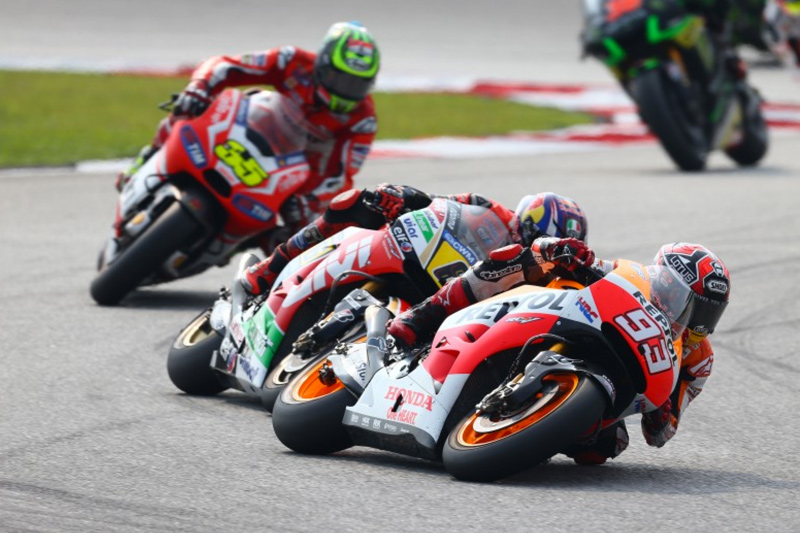 Marc Marquez had to fight his way back after running wide early in the race and dropping to 8th place - Credit: Honda Racing
Back up front Marquez and Rossi put on a good show for the final eight laps but with two laps to go, Marquez opened up the throttle and put a three second gap between him and Rossi.

This win in Sepang is Marquez's 12th victory of the season, equalling Repsol Honda‰Ûªs Mick Doohan‰Ûªs 1997 record for most wins in a single season in the premier class of racing, and has gifted Honda their 21st premier-class Constructors‰Ûª title.

‰ÛÏThis was one of the toughest races of the year for me physically and I'm happy to have equalled Mick Doohan‰Ûªs record!" Marquez enthused. "We knew to expect this kind of weather in Malaysia but it was especially hot today and we all found it hard to finish the race.

"Halfway into the race the pace slowed down because I think everybody needed to take a breath! I'm happy with how I handled the race, because the first corner was a bit of a nightmare but I was able to come back to the front and stay there, whilst I cooled down my tyres and brakes.

"I started to attack with 10 laps remaining, then made the difference when there were 5 laps to go.‰Û 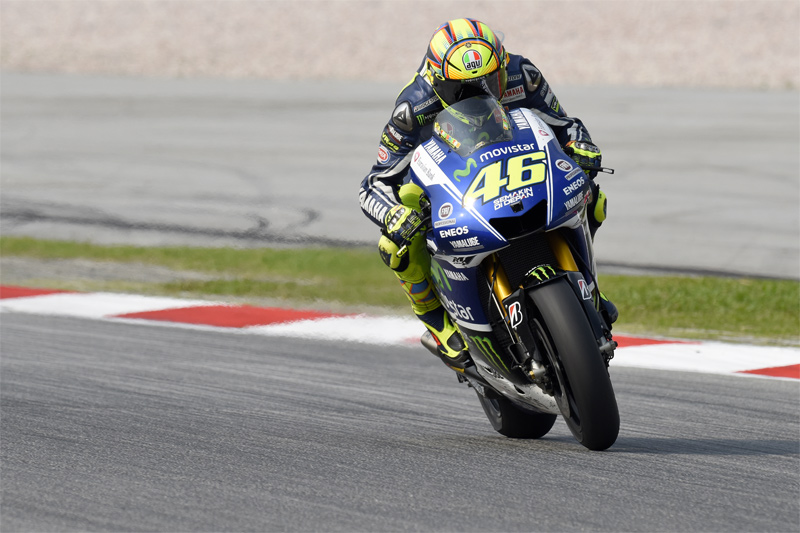 ‰ÛÏThis race is the most difficult race for the riders but I felt good with my preparations." Rossi stated. "This means I have worked well.

"The second place is positive for me because we struggled much during the weekend and I wasn‰Ûªt very strong. This morning we improved the bike and once again in the afternoon. The bike was perfect for the race.

"I fought a lot and I enjoyed the fight with Jorge and also the battle with Marc at the end. At one moment I thought I could win, but unfortunately Marc was a little bit too fast.

"The best way to think of the second place for the championship is to try and fight for the podium. That‰Ûªs my target, but Valencia is a difficult track for me. In the past I struggled there a lot, so this year I want to try the maximum. I want to be competitive on Sunday and try to arrive on the podium.‰Û 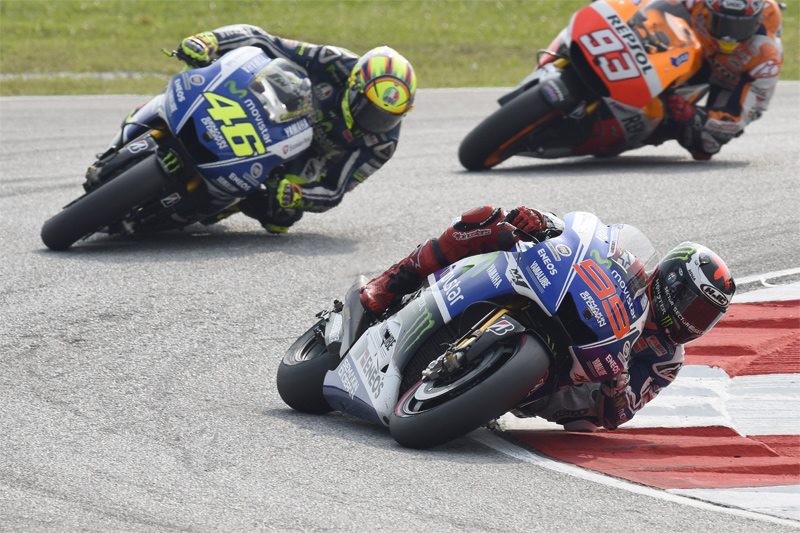 Jorge Lorenzo rounded out the podium in Sepang - Credit: Yamaha Racing
Lorenzo held on to round out the podium comfortably with Bradl finishing a distant fourth, some 18 seconds behind Lorenzo with Monster Yamaha Tech 3's Bradley Smith in 5th place one second behind Bradl.

‰ÛÏThis race was very difficult." Lorenzo admitted. "It was probably the hottest race in Malaysia in the whole 12 years that I have competed.

"I made a good start and was very brave on the first lap. I pushed at the maximum for the first seven to ten laps, but little by little trying to get the bike stopped was getting worse and worse. Valentino was really fast and during the second part of the race he was able to keep the same pace that I had at the beginning.

"It was very difficult to ride and fight. I wasn‰Ûªt as fit as in Silverstone or Misano. These three weeks outside of Europe I‰Ûªve not trained hard enough, so I wasn‰Ûªt as quick.‰Û 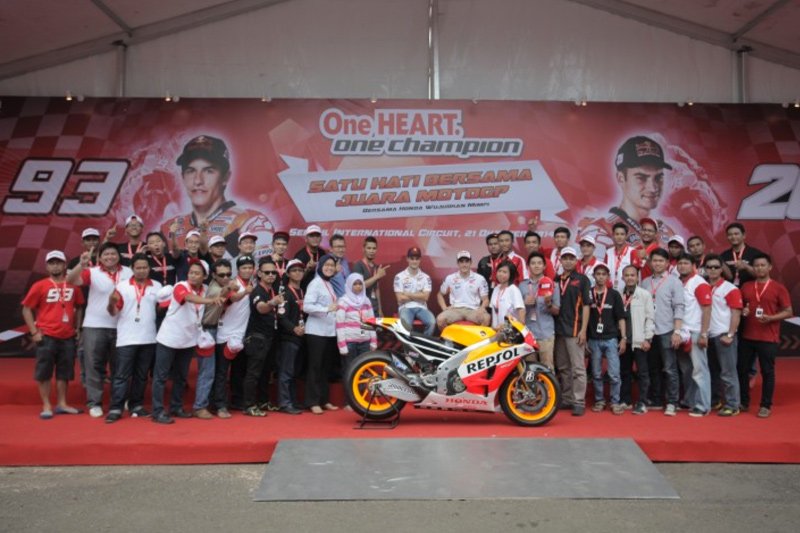 Top Image: Marc Marquez on his way to his 12th win of the season