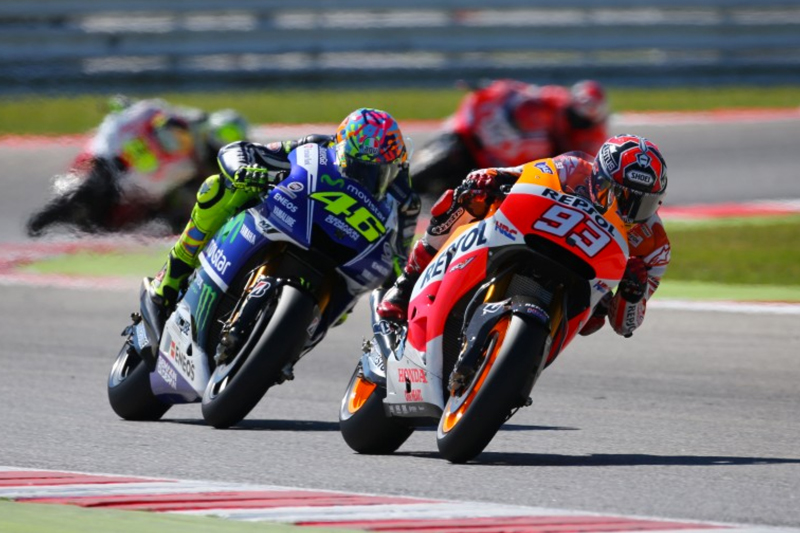 Marc Marquez stormed to his 11th pole position of the season at sunny Aragon, finally getting the better of a strong challenge from team-mate Dani Pedrosa with the Spanish pair set to start first and second on the grid for the third time this season.

Reigning World Champion Marquez had ended the first day of practice second fastest behind Andrea Dovizioso (Ducati) and upped his game, as his engineers fine-tuned his RC213V for this challenging and undulating circuit.

He topped free practice and claimed pole position with an impressive 0.362 second margin over Pedrosa, the fastest-ever motorcycle lap at Aragon. It was his 20th MotoGP pole from 32 starts in the premier class.

"Qualifying went very well, continuing the form that we have had so far this weekend! We have focused a lot of our work on our race pace, looking less at setting a one-off lap time and more at finding a strong pace. Things are looking good for the race, although Dani also has a very good pace, so we'll have to see tomorrow!"

After yesterday's first two practice sessions Pedrosa focused on improving cornering grip and braking which this afternoon allowed him to go fastest for some minutes before Marquez retaliated at the very end of the session.

Like everyone else, Pedrosa knows that the run to the first corner here is one of the shortest in MotoGP followed by a very sinuous first section, so a front-row start is more important than ever here.

Andrea Iannone continued both his and Ducati's late season form qualifying 3rd fastest jus behind Pedrosa to fill out the opening row for tonights race.

Pol Espargaro was the quickest of the Yamaha riders, qualifying 4th aboard his Monster Yamaha Tech 3 machine, just head of Factory Ducati racer of Cal Crutchlow.

Factory Yamaha's Valentino Rossi completes the second row of the grid after struggling to a 6th spot qualifying position, one spot ahead of his team mate Jorge Lorenzo.

Stefan Bradl (LCR Honda RC213V) will start the race from the middle of the third row after putting his RC213V between Jorge Lorenzo (Yamaha) and Andrea Dovizioso (Ducati) in eighth position. Bradl's best lap was just 0.68 seconds off the front row and he believes he would've been closer to the front if he hadn't made a couple of minor errors during his best lap.