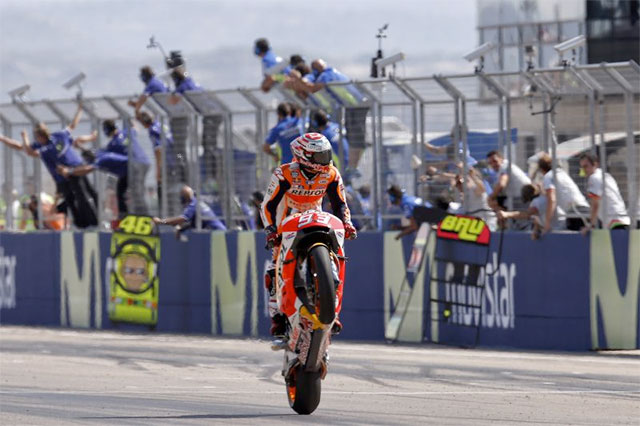 Marc Marquez returned to the top spot of the podium at a Spanish race for the first time since the 2014 finale in Valencia, taking a maiden victory at the AragÌ_n GP. At just 23 years of age, Marquez brings his career tally to 54 wins, equalling Australian legend Mick Doohan.

The only rider so far this year to win four races, Marquez has extended his championship lead to 52 points over Valentino Rossi and 66 over Jorge Lorenzo, with four rounds to go.

The race was incredibly challenging and close. Starting from pole, Marquez fought hard to overtake Maverick ViÌ±ales and Lorenzo, taking the lead on the second lap. Soon after, a risky moment on lap three could have changed the outcome of his race; Marc almost lost the front in turn 7 and nearly crashed out. He saved it but dropped back to fifth.

It took the Spaniard a few laps to calm down and begin his recovery; he overtook Andrea Dovizioso on lap five, Lorenzo on lap seven, ViÌ±ales on lap 10 and finally Rossi on lap 12. He pushed hard for a few laps to pull a gap and then managed the advantage until the chequered flag. Marc was joined on the podium by Honda Motor Director Shinji Aoyama, celebrating the fifth victory by a Honda rider in the last seven races and Honda extending its leading in the Constructor and Team standings.

‰ÛÏI‰Ûªm very happy to have taken the win at a home Grand Prix, and one of my favourite races," Marquez said. "I was waiting for this GP, it was a ‰Û÷red point‰Ûª on the calendar for me, as I saw it as one where I wanted to attack and where I could win the race.

"It was an important victory, but nothing is finished yet," he continued, "I said yesterday that something can always happen in a race, and it was a miracle that I didn‰Ûªt crash today when I almost lost it in turn 7. That was when I decided to relax a little and go back to my mentality from practice of riding precisely and braking in the right places. 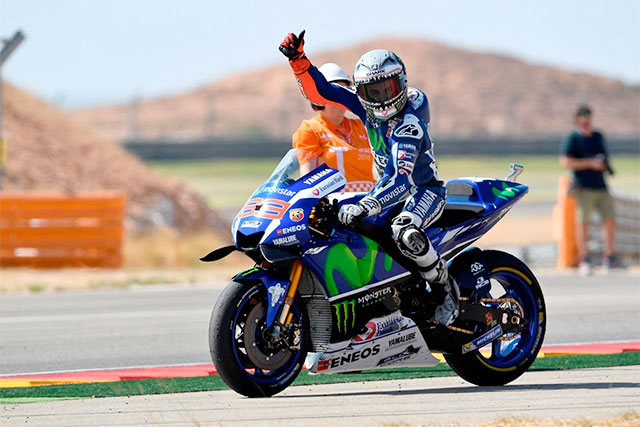 Jorge Lorenzo overtook team-mate Valentino Rossi in the closing stages to secure second place
All this made for a more entertaining race, with many overtaking moves at the start, and a second part in which I was able to open a gap to Valentino, which was important. He had gone several races gaining points on us, and we wanted to stop that trend, because otherwise it would boost his morale and perhaps create doubts for us. Now we leave AragÌ_n with a larger advantage and more convinced ahead of the flyaways. I was very happy on the podium, but the most emotional moment for me today was when [brother] Alex scored his first Moto2 podium. That was really special for me.‰Û 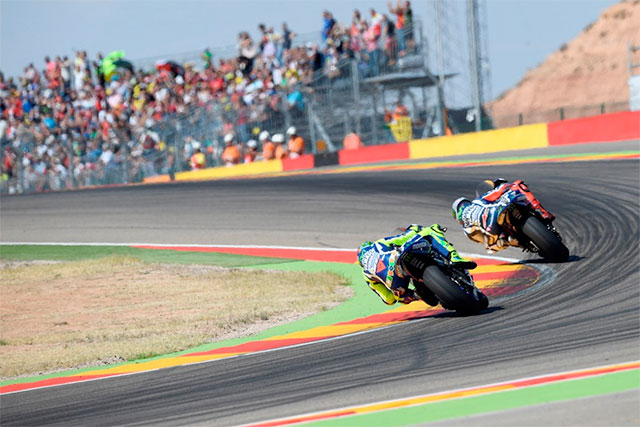 After a mistake and dropping to third Valentino Rossi chased his team-mate Jorge Lorenzo all the way to the line
Valentino Rossi chose the medium front tyre for the race, but in the end it was an error that dropped the Italian back to third rather than any mechanical issues.

"We started with a different setting and we tried to be stronger towards the end of the race, but in the final stages I was spinning a lot, but I think everyone was in the same boat anyway," Rossi said.

"It's a shame that with two laps to go I made a mistake in braking and I had to go wide. If not for that we could have fought for the second place, but anyway the podium is OK.

"I'm happy because it's a good podium. Here, in AragÌ_n, we always suffer a bit. It's a shame and I'm not fully happy, because I wanted to arrive as the first of the Yamahas and in front of Lorenzo, but unfortunately in the second half of the race he was faster than me. It's a shame, because I had some cards up my sleeve for the last laps, because I was there, but I made a mistake. I decided to go straight because else it would have been very dangerous for both of us. I lost the four points to Jorge, but it's another podium. We hope we can improve and that we can be more competitive for the overseas races." 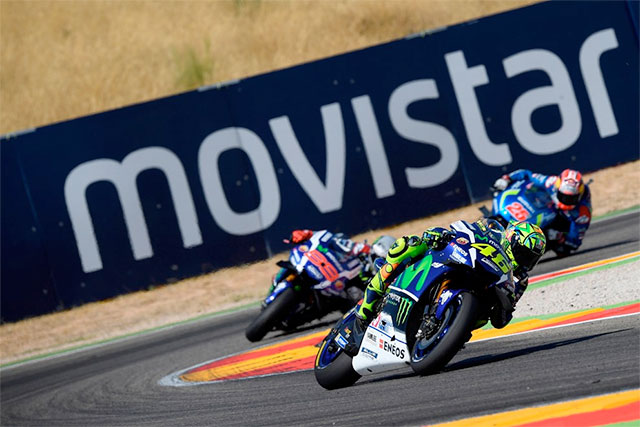 ViÌ±ales ‰ÛÒ choosing a hard/ hard Michelin tyre combination - took the lead on the opening of 23 laps from his second position on the grid, and, apart from losing his lead a few times momentarily, controlled the race until almost half race-distance before running wide, but fought back to bring home a solid fourth-place and just off the podium.

‰ÛÏAnother positive race for me, although I‰Ûªm never fully satisfied when I‰Ûªm off the podium, but we must say that we gave 100% today," ViÌ±ales said. "When the grip was supporting me I could do a really good pace, and in fact I took the lead in the race. I felt really confident and the lap-times came quickly and easily.

"Then suddenly the rear tyre lost performance due to the consumption and that is when I had to give-it-up a little. I couldn‰Ûªt feel confident with hard-braking and also in acceleration, and trying to force the pace I made some mistakes that warned me to be more conservative in my riding.

"It was important to not have a crash and to finish the race; fourth is a lot better than a ‰Û÷NC.‰Ûª We knew I could have problems towards the end of the race with a worn tyre, we tried to put in some countermeasures with the electronics, but we still need to better-develop this set-up. We are continually learning and my crew did a really good job, we are getting better and better and the results in last races are evidence on this.‰Û 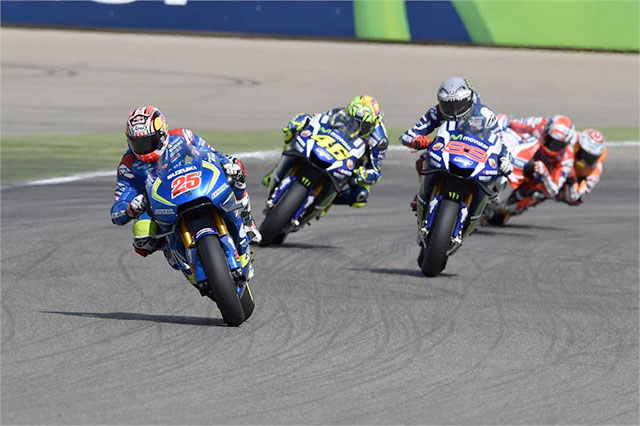 Pedrosa struggled the entire race with lack of both front and rear tyre grip. In particular, he suffered an unusual degradation of the front tyre, which Michelin will promptly investigate. Pedrosa's 10 points that come with sixth place maintain's his fourth place in the Championship standings.

‰ÛÏUnfortunately, we didn‰Ûªt have a good result today, as we had a very difficult race," Pedrosa lamented. "I didn‰Ûªt have grip since the beginning of the race; I couldn‰Ûªt exit the corners with good speed, and that turned out to be my biggest problem in the opening laps. I couldn‰Ûªt open the throttle out of the corner and I lost ground on the front guys. I tried to manage in the best way possible, but a few laps later I started to have an issue with front tyre as well. I started feeling a vibration, and when I finished the race it was clear there was some problem there. I tried to fight with Crutchlow but I had to slow down my pace. It was a shame but now we must look forward.‰Û 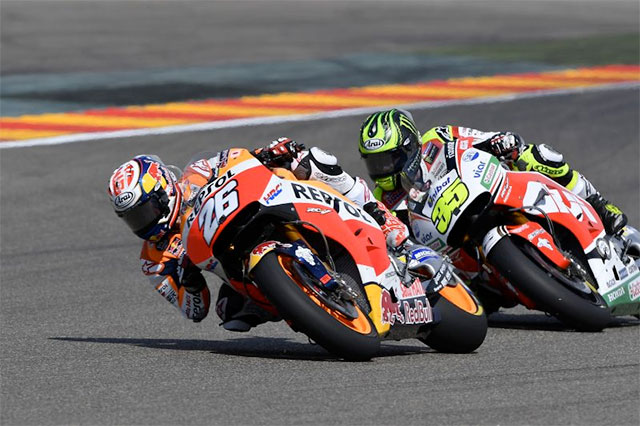 The Honda duo of Dani Pedrosa (26) and Cal Crutchlow fought it out for fifth and sixth with Crutchlow eventually coming out on top.
Suzuki's Aleix Espargaro took home seventh place.

‰ÛÏI had bigger expectations for the race, especially to be more competitive at the beginning because the progress we made in this morning‰Ûªs Warm-Up gave me bigger hopes," Espargaro said. "The start was positive but then I struggled a lot to overtake for the fifth position in the second part of the race, which was the one needed to keep in contact with the head of the race.

"I‰Ûªm not able to interpret the front tyre and exploit its potential. We made a lot of attempts and changes but I can‰Ûªt adapt my riding style and so I cannot be as fast as I would like to be. I had a really good fight until the end, but finally I made a small mistake on the last lap and I lost sixth position.‰Û 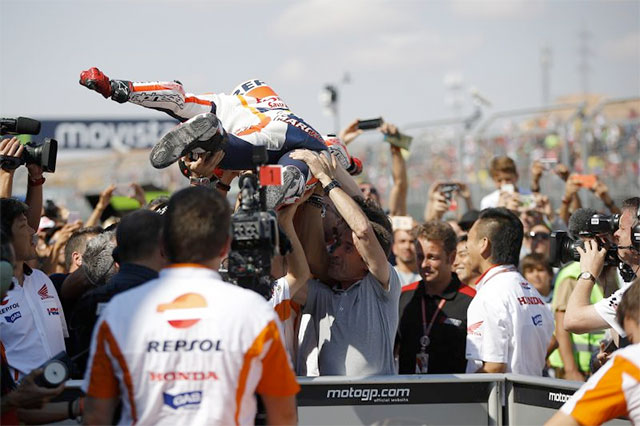 Marc Marquez celebrates his home GP victory with his team
Pol Espargaro ended the race eight ahead of Alvaro Bautista, while Aprillia's Stefan Bradl rounded out the top ten.