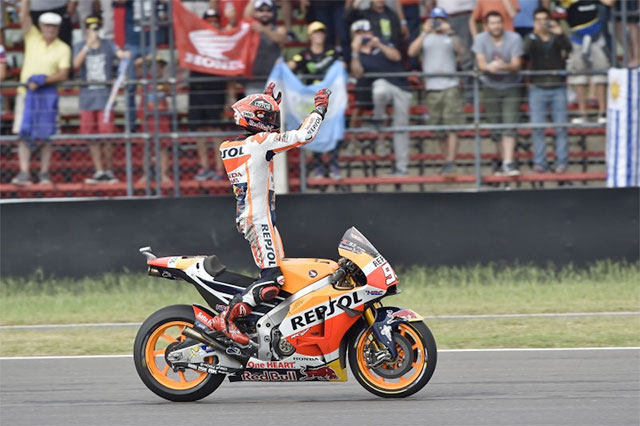 A faultless flag-to-flag race by Marc Marquez saw him dominate the Argentina GP, running away with victory from Valentino Rossi and Dani Pedrosa.

Issues with the rear tyre of Scott Redding‰Ûªs (Octo Pramac Yakhnich) Ducati during Free Practice 4 on Saturday saw a raft of changes brought in. Michelin and Race Direction were unsure about the safety of rear tyres brought to the Gran Premio Motul de la RepÌ¼blica Argentina, and came to the decision to reduce the race from 25 laps to 20. As Warm Up had been held in wet conditions and the race started dry, riders were required to come in on their ninth, tenth or 11th lap of the race and change to their second bike. There were therefore no concerns about fuel or tyre life, riders able to give it their all on both stints.

Team Suzuki Ecstar' Aleix Espargaro was the only rider to opt for the harder rear tyre. The entire front row started with hard fronts and medium rear. With dark clouds looming overhead the race got underway, Jorge Lorenzo getting the hole shot into Turn 1. Ducati's Andrea Iannone got a great start but came into contact with Dani Pedrosa, forcing them both wide and dropping Pedrosa outside the top ten.

Marquez took the lead on lap 2 by moving past Rossi and Dovizioso, and he was engaged in a thrilling battle with Rossi for first position until the bike change. On lap 10, he entered the pit a fraction ahead the Italian and re-joined the track in the lead. On his second bike, Marc put in a sequence of fast laps that nobody was able to match, and in five laps he opened up a gap that allowed him to comfortably cross the line with a 7.6-second advantage.

‰ÛÏI‰Ûªm really happy with this win because we‰Ûªve worked very, very hard during the pre-season, in Qatar and here," Marquez said.

"Honda is working very well and I feel the support; we‰Ûªre going in the same direction, and that‰Ûªs the most important thing. It‰Ûªs a special win, not only because it‰Ûªs the first one of the year but also because with the team, we managed the situation very well, and after what happened in Australia on a similar occasion [in 2013], it was important for us to do well. 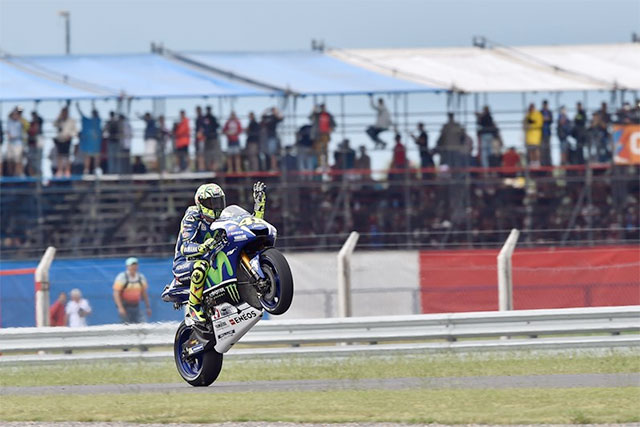 Andrea Dovizioso used the power of the Ducati to hit the lead early with Movistar Yamaha MotoGP's Valentino Rossi behind. The factory Ducati would head the field across the line on lap one with Rossi just behind, Marc Marquez an ever-present threat. Meanwhile, Jorge Lorenzo plummeted down the field and soon found himself in sixth.

As the first lap came to a close, LCR Honda's Cal Crutchlow and Aleix Espargaro fell, both able to re-join the race. Carving his way through field, Jack Miller was up to seventh as the second lap began, slotting in behind Lorenzo and then passing him soon after.

The leading trio continually tightened, Rossi sniffing up the inside of Dovizioso at every chance he got. This opened the door for Marquez, the Spaniard sliding through on both Rossi and Dovizioso to begin lap four in the lead of the race. 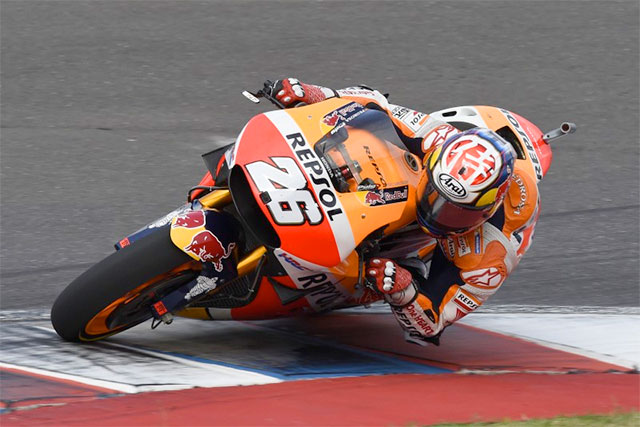 Dani Pedrosa took third place
Miller‰Ûªs charge would be unfortunately short lived as the Australian rider fell on lap four at Turn 3. All the while, Marquez pushed ahead and attempted to open a gap, the top three divided evenly by half a second. Dovizioso then found himself with teammate Iannone for company, Maverick ViÌ±ales (Team Suzuki Ecstar) eagerly waiting to pick up the pieces of the Ducati battle.

Riders frantically glanced at their pit boards as they roared down the straight, their teams doing all they could to keep them up to date with bike change strategy. Lorenzo‰Ûªs race would get even worse as with 15 laps to go he suffered yet another fall at Turn 1, ending his race. After the perfect weekend in Qatar, few imagined the World Champion would fail to finish in Argentina.

Marquez and Rossi continued to sprint away at the front, Marquez 0.8s ahead with Rossi two and a half second in front of the all-Ducati battle for third. The gap wouldn‰Ûªt stand as a distinct hint of dÌ©jÌÊ vu began to appear, Rossi rapidly closing in on Marquez. On lap nine of the race, Rossi took the lead down the back straight but Marquez responded straight away to cut back ahead.

It wasn‰Ûªt only Marquez who made movements, while eyes were fixed on the leaders, ViÌ±ales was able to get ahead of the Ducati factory pair for third. Iannone and ViÌ±ales were the first riders to enter the pits on lap nine to change their bikes, Pedrosa, Baz, Barbera, Laverty and Bradl following suit as Marquez and Rossi tussled in the lead. With 11 laps to go, the pair came into the pits, Marquez just ahead as they were both forced to respect the 60km/h limit in pit lane. 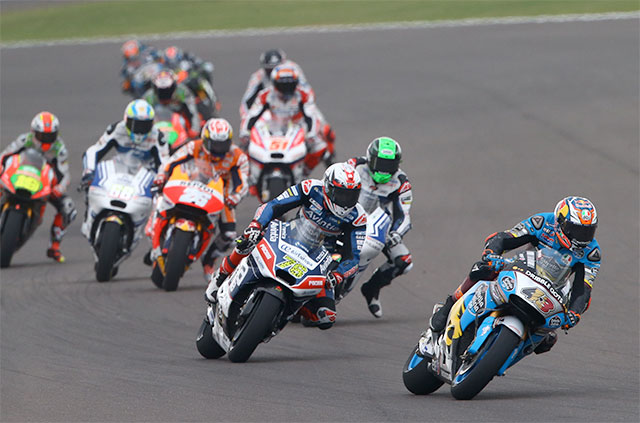 Aussie Jack Miller (43) struggled to stay upright all weekend and hit the deck for good in the race.
Marquez would re-join the race in first position with Estrella Galicia 0,0 Marc VDS rider Tito Rabat in second, as he had not yet pitted. With Rabat as a buffer, Marquez pushed as hard as he could to break away from Rossi and opened up a lead of over two seconds. The gap would open to a massive three seconds as the final nine laps of the race began, ViÌ±ales two seconds back on Rossi as the Suzuki rider was able to retain third after the bike changes.

As the leading three settled into their rhythm, Redding used the power of the Ducati GP15 to blast past Pedrosa and move into six behind the Ducati factory pair.

Rossi‰Ûªs pace soon settled in the 1‰Ûª41s, not fast enough to catch Marquez and ‰Û÷The Doctor‰Ûª quickly found himself fending off Maverick ViÌ±ales. The Ducati factory pair continued to swap positions behind them, all four riders in the fight for second as Marquez‰Ûªs lead grew with each lap. Rossi was able to up his pace as soon as ViÌ±ales was with him, the young up and comer giving as good as he got with the old master. 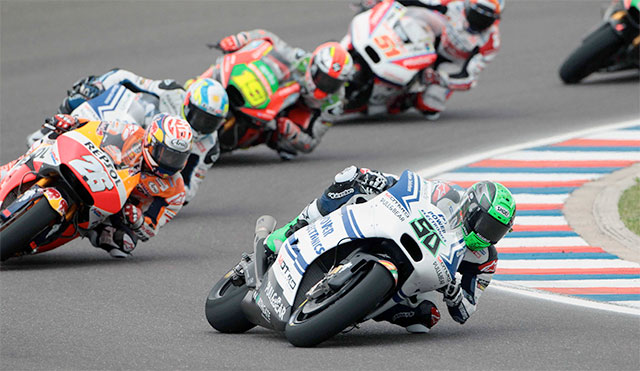 Eugene Laverty regained some confidence with a solid fourth place
Redding encountered a technical problem with five laps to go and was forced to retire, the Brit on course for a top six finish.

ViÌ±ales came under pressure from Iannone at Turn 1 as the 18th lap of the race began, unfortunately crashing out of the race. This gave Rossi a small amount of breathing room, Iannone over half a second behind his compatriot. But the cushion wouldn‰Ûªt last for long, Iannone blasting up the inside of Rossi and opening the door for ‰Û÷Demso Dovi‰Ûª to come up the inside of them both.

The last lap began with Dovizioso in second as Iannone held onto the final step of the podium, Rossi hunting for a way past the powerful Ducati. Every time they ran across a straight the Ducati was able to stretch its legs, Rossi trying all he could on the brakes. Iannone did not defend; instead he began to attack his teammate Dovizioso, the pair crashing out together at Turn 12 after an overly enthusiastic move from Iannone.

Their incident promoted Rossi to second and saw Dani Pedrosa take a surprise third place finish. Determined to finish, Dovizioso showed true grit and determination to push his Ducati across the line for 13th place.

Just off the podium was Eugene Laverty (Aspar Team MotoGP), the Irish rider ending fourth and as the top Independent Team rider. This is by far Laverty‰Ûªs best result in MotoGP‰ã¢, besting Hector Barbera (Avintia Racing) by 0.169s.

There were also crashes for Yonny Hernandez (Aspar Team MotoGP) and Michele Pirro (Octo Pramac Yakhnich). Both were unharmed and Pirro remounted to finish 12th. Cal Crutchlow and Loris Baz also failed to finish the race.