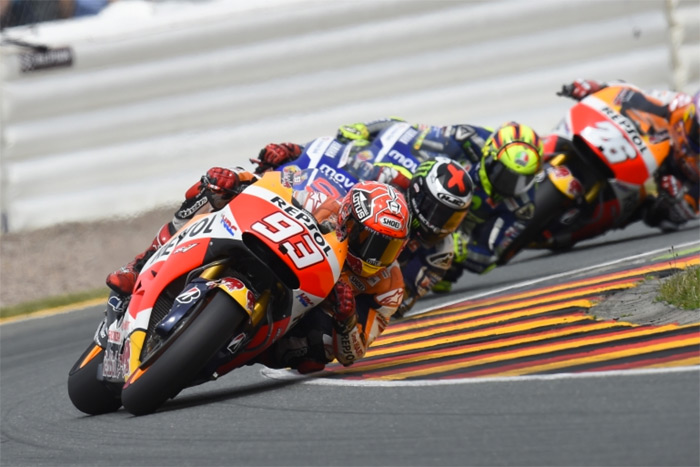 Repsol Honda MotoGP riders Marc Marquez and Dani Pedrosa stamped their authority on the ninth round of the 18-race 2015 MotoGP season at the Sachsenring overnight.

The Spanish pair took dominant first- and second-place finishes at this twisting, undulating racetrack, reaffirming their return to form after a challenging start to the season during which both men suffered three no-scores each, Marquez through tumbles, Pedrosa through surgery.

Marquez‰Ûªs first win since his runaway success in April‰Ûªs Grand Prix of the Americas moves him to within 65 points of series leader Valentino Rossi (Yamaha).

With track conditions warmer than during the past few days both Marquez and Pedrosa chose harder front tyres, allowing Jorge Lorenzo (Yamaha) to lead the first few laps. Once in the groove, Marquez took the lead at Turn 13 on lap five and quickly showed his devastating speed.

By lap 18 of 40 he was 4.5 seconds ahead of Pedrosa, and eventually crossed the finish line 2.2 second in front of his team-mate. It was his sixth successive win at the German track and his 47th career success across all classes.

‰ÛÏI am very happy with this victory." Marquez admitted. "I‰Ûªve been chasing it hard over the last few races. In Assen we began to see the light at the end of the tunnel.

"After Barcelona, which was very hard, I felt good on the bike again thanks to the changes we made. We have confirmed that they worked here at this circuit, but I want to be cautious because I am aware that this circuit has always been very good for me and also for the Honda.

"We have to keep working, because on the laps I did behind Lorenzo I saw that in some aspects they were stronger than us. Let‰Ûªs see if we can continue improving at the Misano test next week.‰Û 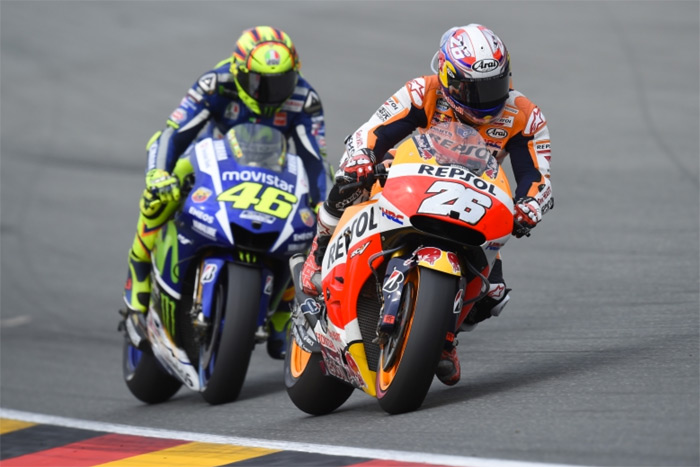 Dani Pedrosa was back on pace finishing second to his team-mate
Pedrosa fought and won a thrilling duel with former champion Rossi for the runner-up spot, showing superior pace in the final few laps to beat the Italian by more than three seconds.

The result was further confirmation that his decision to under surgery to correct a troublesome arm-pump problem was correct.

‰ÛÏI‰Ûªm so happy ‰ÛÒ above all with how we finished the race as I rode very strongly." Pedrosa commented. "I was under a lot of pressure from Valentino and, although it had been a while since I had last fought with him and he is very difficult to beat, I gave my all and was able to finish ahead of him.

"I rode much better at the end and it is the first race this season in which I kept up a good pace until the finish. It‰Ûªs true that here the bike had less of a handicap than at other tracks, due to the type of circuit it is, but at next week‰Ûªs test we have to work hard, because both Jorge and Valentino were much closer today than in other years here.

"We‰Ûªll see if we can find something for the second half of the season to make us more competitive.‰Û 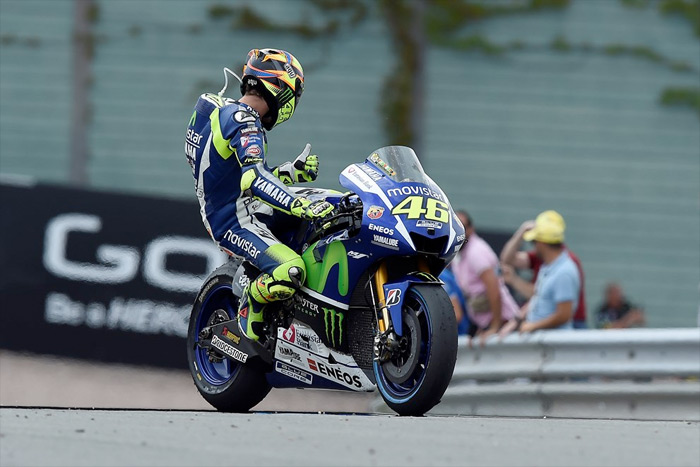 Valentino Rossi extended his championship lead with his third place result
Rossi's third place keeps him in first position in the world standings with 179 points, 13 points ahead of teammate Lorenzo, with 166 points, who stays in second place with a 48 points gap to his closest rival.

"First of all, the podium is always good, but you always want to arrive better than third." Rossi commented. "For this weekend I think third was the maximum we could reach, because Marquez was stronger than us.

"The important thing was to arrive in front of Jorge for the championship. I think we did a very good race, because we worked very well and from the warm up to the race my bike was good and I could push a lot. It may only be three points more that we scored, but it's still another podium and I extended the lead a little bit.

"The perfect way to describe the race is that "I tried to beat Dani". I tried, but on the last laps he was too fast for me. However it was also good for me, because he allowed me to get away from Jorge, just his slipstream helped me a lot.

"I tried to stay with Pedrosa for ten laps, because I knew that it was key on gaining some time on Jorge. Today's third place is crucial because Jorge arrived here with four victories in a row, where he gained 28 points, so it was a very important win in Assen and also to arrive in front of him here, so we extend the lead to 13 points.

"Now I need two weeks off, because I have worked very hard for this championship. I haven't had a holiday since the beginning of February. It's been all work; going to the gym, ride the motorbike, train. Now it's time to relax." 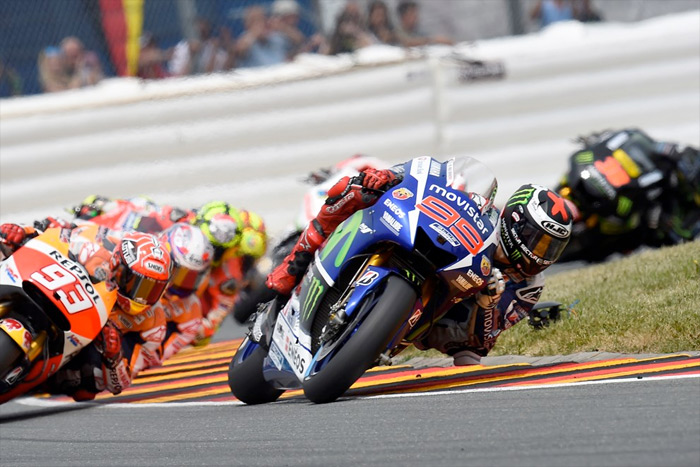 Jorge Lorenzo had a loney race to fourth after leading early
Rossi's Yamaha team-mate Jorge Lorenzo raced to a lonley fourth place finish, finishing 4 seconds behind Rossi, though some 11 seconds in front of fifth placed Andrea Iannone who once again lead the way for Ducati.

Australia's Jack Miller had a great race finishing in 15th position and collecting a well earned MotoGP championship point along the way.

MotoGP will be taking a four week summer break before continuing the season at Indianapolis Motor Speedway on the 9th of August. 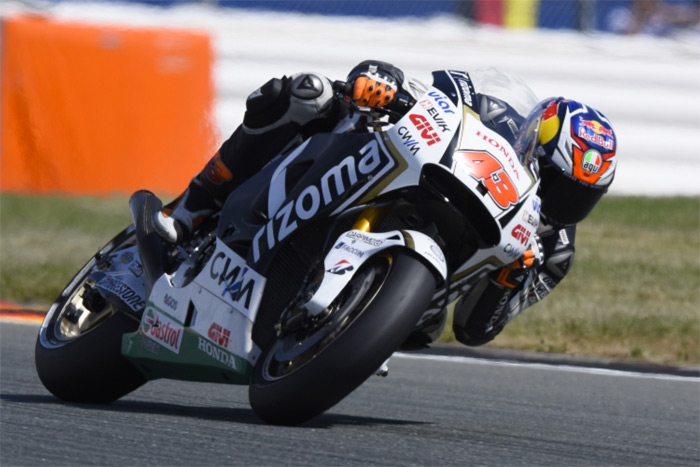 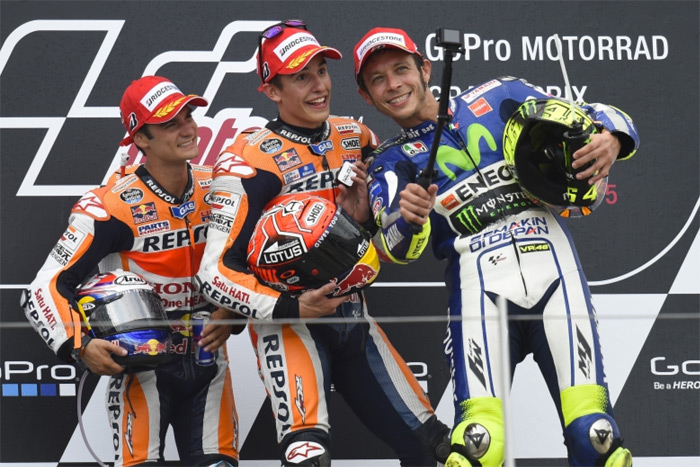