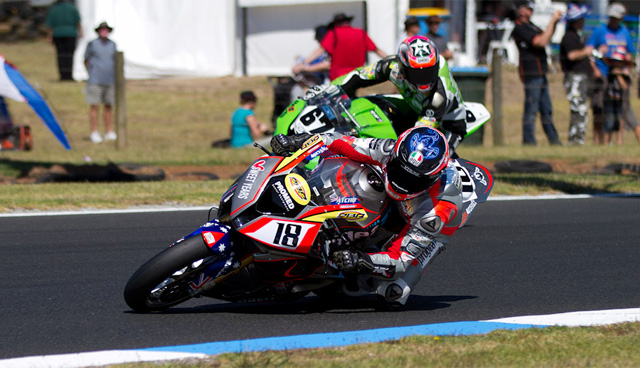 Mark Aitchison, Australia's only full-time presence in the 2012 Superbike World Championship, will be armed with a souped-up BMW as the title makes its first foray into Italy this weekend.

The 29-year-old's team will be rolling out a new-spec engine and electronics package for his S 1000 RR at Imola, as well as a different gearbox.

"I can certainly say that the first day of practice and qualifying should be pretty interesting," said Aitchison. "We gathered a lot of data on the S 1000 RR at the opening round in Australia, but we really haven't had a chance to confirm what was learnt as the bikes only arrived back at our Italian base quite recently". added the rider from Tumbi Umbi NSW

"But once we actually get some testing under our belts and the team and I are working in a good direction, we can then really start striving for some top 10 results. continued the Grillini BMW team rider

After an 18th and a DNF at the opening round of the WSBK series in Australia, Aitchison will look for improved results at Imola and will do the best job he can over the weekend.

"It was great to have three other Aussies on the grid at Phillip Island, but now that it's only me it won't affect my outlook on each race. Of course I'm very proud to represent my country, but really I'm here to do the best job I can each and every time." Aithchison concluded.