Marc MÌÁrquez commits to Honda through to 2018 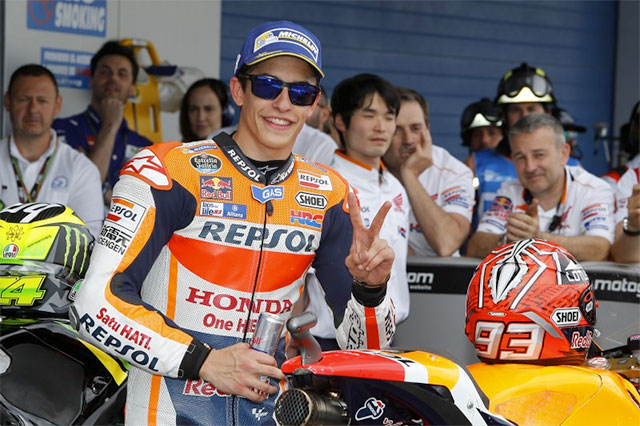 The 23-year-old Spanish rider will continue to race for the Repsol Honda Team for the next two years.

MÌÁrquez is currently in his fourth season in the MotoGP class, which has soley been with the Repsol Honda Team. During that time, he has achieved two World Titles, in his rookie season in 2013, and again in 2014, whereas he finished third last year. MÌÁrquez, so far, has won nearly half of the Premier-class races he has entered and has finished on the podium 73% of the time.

With six rounds having been completed in the 2016 season, MÌÁrquez arrives at this weekend‰Ûªs Catalan GP second in the standings by just 10 points.

‰ÛÏI'm very happy to announce this renewal with HRC, especially coinciding with Grand Prix of Catalunya, my home GP, where I have some really good memories," Marquez said.

"HRC and I have a very strong relationship, and I‰Ûªve always wanted to continue being a part of the Repsol Honda Team. In three and a half years together, we‰Ûªve enjoyed some unbelievable moments, with great victories and two world titles, as well as a few challenging moments that I believe are making us stronger. We‰Ûªre working very hard this year to regain the title. It‰Ûªs a great honour to be a part of the Honda family, and I‰Ûªm glad to remain with this special group of people for another two seasons.‰Û