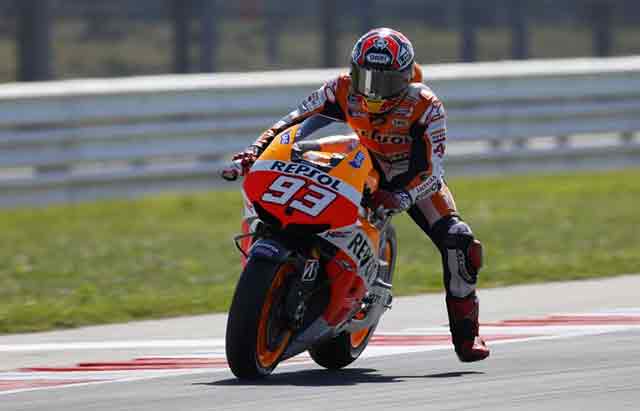 The factory Yamaha duo of Jorge Lorenzo and Valentino Rossi where 2nd and 3rd fastest respectivly ahead of Marquez' team-mate Dani Pedrosa who was fourth quickest in qualifying, less than two tenths of a second off the front row of the grid.

Although this is Marquez‰Ûªs first visit to Misano on a MotoGP bike, the 20-year-old has topped all five sessions so far. Even a high-speed tumble in FP4 ‰ÛÒ when he ran out of front grip and slid off, like so many other riders here this weekend ‰ÛÒ failed to disrupt his momentum.

The reigning Moto2 World Champion‰Ûªs fastest lap in qualifying was the fastest-ever motorcycle lap at Misano and more than half a second ahead of Lorenzo. Tomorrow he will be aiming for his 12th podium finish ‰ÛÒ preferably on the top step ‰ÛÒ from his first 13 MotoGP races.

‰ÛÏI‰Ûªm very happy with this pole position, as we had a really good hot lap! It‰Ûªs a shame about the small crash that we had in practice this morning ‰ÛÒ which was completely my fault ‰ÛÒ but the important thing is that we know where I made the mistake," Marquez said.

"In qualifying I felt very comfortable every time on fast laps and was able to put in some quick times. We‰Ûªll see if we can fight with Jorge tomorrow, as he has a very good pace. Valentino will also be tough to beat, because it is his home race and he has been very strong in practice. I‰Ûªm sure that he will be fast tomorrow, as will Dani. The aim is to get a good start, try to ride in the lead group at the front and pick up more World Championship points.‰Û 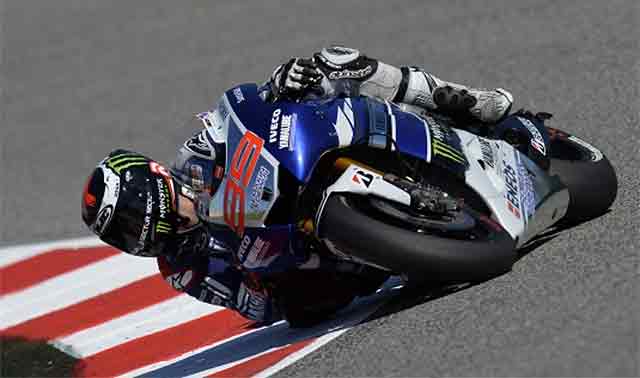 Jorge Lorenzo was second fastest at Misano.
Jorge Lorenzo had problems with braking but was still happy to be second on the grid for tomorrow's race.

‰ÛÏI expected to struggle less this weekend and go faster than last year but I couldn‰Ûªt be faster and I couldn't improve the bike so much," Lorenzo lamented.

"We improved a little but not enough to be closer to Marc. He made an amazing lap. We are struggling to stop the bike in braking and we have more spinning than normal in acceleration, that is why the lap time is not great. I will try to make a good start tomorrow and maybe the best strategy is to follow Marc and see how our performance is during the race.‰Û