Marc Marquez races to a thrilling Moto2 win at Qatar 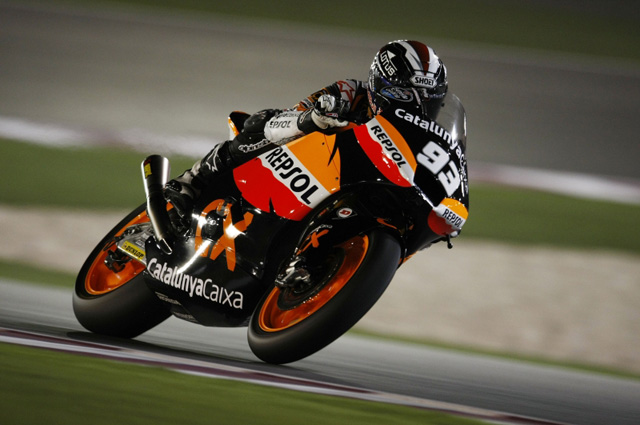 Marc Marquez has won the opening round of the Moto2 category at Qatar, after a thrilling last lap battle with AndrÌ©a Iannone.

It was not long ago that the future of Marquez was in doubt. Now it could not be brighter. The young Spaniard who had a magnificent run in last year's Moto2 World Championship before being sidelined with serious vision problems.

Marquez's future had been in doubt since he suffered vision problems as the result of a crash in Malaysia that was not his fault. But the double vision gradually abated and he was among the fastest riders in the final pre-season test.

Under the desert lights, he rode a masterfully tactical race, pressuring the leaders from the start before a critical mistake dropped him to fifth seven laps from the end.

Then the real race began, with Marquez working his way through the pack to take third on the following lap, then second with four laps to go.

It then became a two-man battle with pole-sitter Thomas Luthi and Marquez, with neither giving an inch. Luthi led to start the final lap and as they braked into turn one Marquez moved to his left and Luthi ran off the track, across the artificial grass and onto the concrete run-off, from where he began his recovery. He would finish fifth.

This left Marquez in front of Iannone with less than a lap remaining. The Italian made a bold move in the last of three right corners near the end of the lap to take the lead. Marquez stayed in his wheel tracks and as they sped down to the chequered flag he perfectly timed his pass to win by .061s. Pol Espargaro, who had led the most laps, finished third at 1.412s, just ahead of his Pons 40 HP Tuenti ‰ÛÒ Kalex team-mate Esteve Rabat. 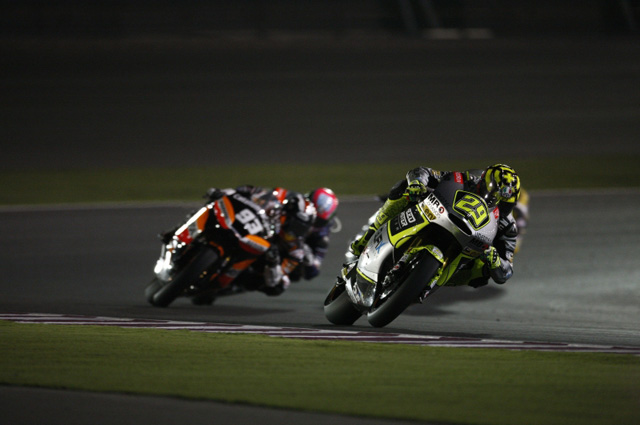 Iannone lead Marquez through the final few corners but could not hold on to the line.
The night belonged to Marquez who sees the hard fought race one win as the first step in what will be a long season ahead.

"It really was a very hard race and I wasn't expecting a win. My aim for the race was to try and stick with the rest of the riders, but in the end their pace wasn't as fast as we had expected." said Marquez

"This was a hard fought victory and a really beautiful moment. I really appreciate it after the tough winter that we have had. This race was especially tricky because of the difficulty that I had been experiencing in the practice sessions in terms of finding my pace. However, in the race I felt good, was very focused and knew that I had a chance even without being at 100%." stated the Team CatalunyaCaixa Repsol-Suter rider.

"It was a surprise to me. There are still many races to go; this is just the first step and we have to take things step by step. This has only just begun." he concluded.

Iannone rode a near perfect race and nearly pulled off a great victory, after staying with the lead group for the entire race, he made his move to the lead with just a few corners to go before being pipped at the post by Marquez.

"This was a tough race. Since the beginning the other riders had a good rhythm and were very fast, but we weren't too far from them." said Iannone

"I managed to stay in the leading group and within the top riders till the end. Marc Marquez was faster and it was difficult to stay behind him, in particular when Marc and Luthi went away. In the last laps I eventually got closer." he added.

"There was no chance to do any better than this, but we are still taking home a good result. Congratulations to all the riders, they proved to be very fit: it'll be a great championship." the Italian concluded.

Rounding out the podium was Espargaro, who was happy for his team to finish in third place. however he was not quite as happy for himself, as he wanted to be with the race win his goal coming into the season opener.

"I'm not quite happy because always when you are here you want to win and I would try it, but we didn't find that first win in Qatar." said Espargaro.

"But anyway, start with a podium here is so good with my team, to my people, and start to work more for the next step in Jerez." he added.

Rabat and Luthi rounded out the top five while Australia's Anthony West finished the race in 25th place for his QMMF Racing Team. 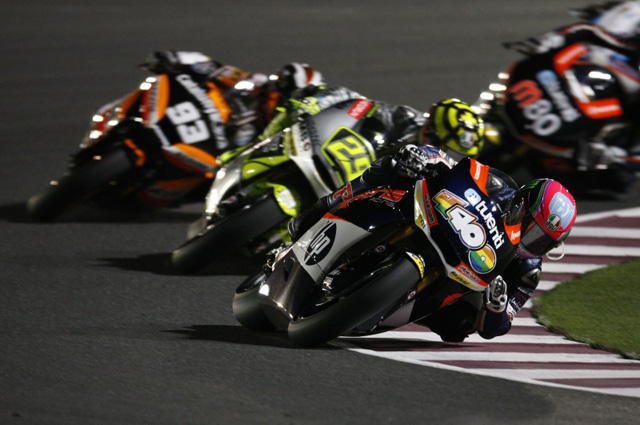 Main Photo: Marc Marquez on his way to victory at Qatar