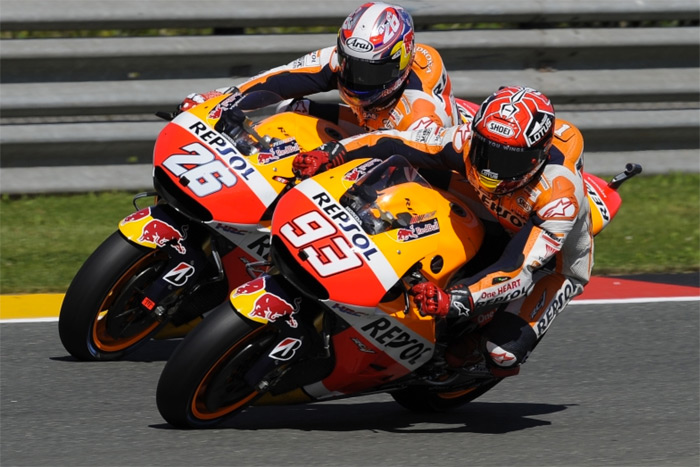 Repsol Honda rider Marc Marquezwas back to his best at the Sachsenring, dominating qualifying with a faultless lap that saw him top qualifying easily ahead of his team-mate Dani Pedrosa.

Marquez was in brilliant form at a track at which he hasn‰Ûªt been beaten since 2009. He led free practice, then confirmed that he is back after a difficult spell with a scintillating qualifying performance, which put him well inside the circuit record. It was his first pole position since May‰Ûªs French GP.

At recent races HRC have been working hard to give Marquez the feeling that allowed him to dominate last season ‰ÛÒ during which he won ten consecutive races ‰ÛÒ and the Spaniard is now happy that he once again has the precise control he needs to ride on the very edge.

"I am happy with my fast lap, but above all I am pleased with my pace and how I feel on the bike. It seems as if we are gradually getting better with that, but I am aware that tomorrow‰Ûªs race will be a tough 30 laps and that Dani is very strong here, as are Jorge and Valentino, but I feel ready to fight for the victory.‰Û