Malkiewicz unstoppable in the Yamaha 85cc Cup class in Horsham 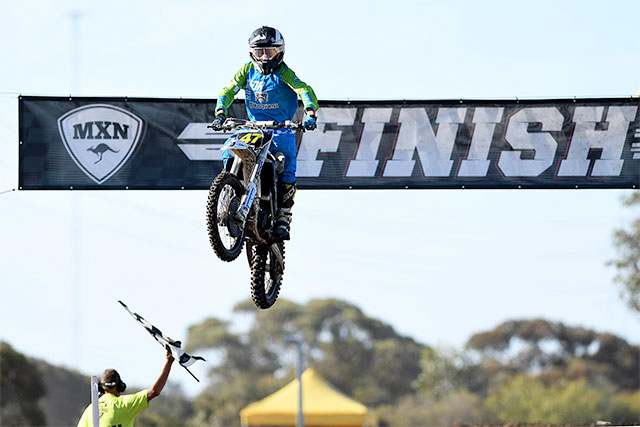 Juniors were treated to the opportunity to race alongside Australia‰Ûªs best on the weekend, when the first round of the Motul MX Nationals hosted upcoming stars in the Yamaha 85cc Cup yesterday.

From the minute the 85cc machines hit the track, the motocross youngsters had the chance to put down their fastest lap times during qualifying, and at the conclusion of their morning session it was John Bova (KTM) who was three seconds faster than any other rider on track with a 2:10.038, followed by Husqvarna‰Ûªs Bailey Malkiewicz, and Zack Wright (KTM) who posted the second and third quickest times respectively.

When racing kicked off for the Yamaha 85cc Cup class, riders were treated to a venue packed with motocross fans, and the youngsters took full advantage ‰ÛÒ putting on a show in their first race of the day.

It was Malkiewicz who impressed in race one, leading from the minute the gate dropped to when the chequered flag flew. Fastest qualifier Bova took second on his KTM machine, ahead of Reid Taylor, and Tyler Darby who wrapped up race one in third and fourth places respectively.

In race two the Yamaha 85cc Cup class were forced to contend with rough and tough track conditions, however the youngsters took to the challenge like true professionals, and put on one final performance at the Horsham venue.

Despite Bova leading for a total of four laps, Malkiewicz (Husqvarna) was unstoppable once again ‰ÛÒ moving in to the race lead on lap five, a lead which he did not relinquish.

Unfortunately, a small mistake by Bova in the closing stages of the moto, meant that KTM mounted Darby was able to move in to second, relegating Bova to third position with only a few laps remaining.

By the time the chequered flag flew, Malkiewicz took a comfortable race two 85cc Cup win ahead of Darby, and Bova who finished in second and third places respectively.

With two race wins to his name, Malkiewicz was more than deserving of the overall Motul MX Nationals round one victory, taking the top step of the podium, followed by Bova and Darby who both filled the final positions on the Yamaha 85cc Cup box, in second and third places.

‰ÛÏI wasn‰Ûªt really expecting to take the clean sweep here at Horsham, I just came to get some points because I had a shoulder injury coming in to round one and I‰Ûªm still recovering,‰Û