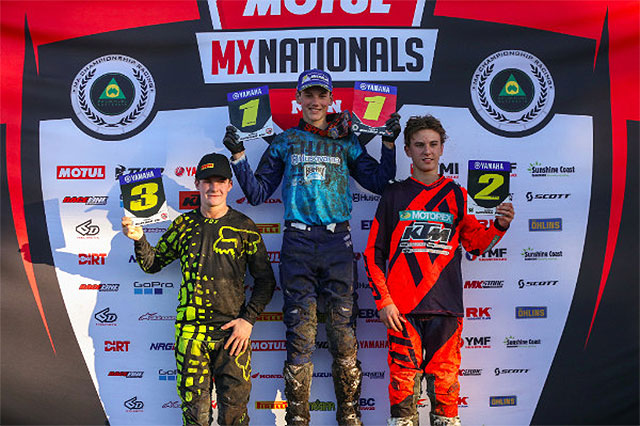 The Yamaha 250cc Junior Class returned to the Motul MX Nationals at Horsham yesterday, and once again the future champions showed the industry just what they‰Ûªre capable of, contending with the first mud race of the season.

It was Husqvarna‰Ûªs Bailey Malkiewicz who secured the round win and the red plate after two consistent finishes at Horsham yesterday, seeing the youngster walk away with plenty of reason to celebrate.

With the track at Horsham suffering from heavy rain in the lead up to the round, when riders headed out on track to record their fastest times during qualifying yesterday morning, it was a mission for competitors to simply to stay upright.

But one rider who was able to do more than just stay upright was KTM‰Ûªs Regan Duffy. Duffy clocked in a 2:45.289 lap time handing him first gate pick when racing commenced. Second fastest on track yesterday morning was John Bova aboard his KTM (2:46.379), followed by Husqvarna‰Ûªs Malkiewicz (2:50.711) in third.

Race one took place immediately after the lunch break, and it was Duffy who carried his momentum from qualifying into the first race of the day.

After getting the jump off the start, Duffy stretched out an impressive gap on second placed Rhys Budd (Honda), while Bova was only a short distance behind in third.

At the mid-way point in the moto, third fastest qualifier Malkiewicz charged through the pack to pass Bova for third, while Duffy and Budd continued to occupy the top two positons.

When riders received the last lap board there had been little change to positions at the front, and when the chequered flag flew it was KTM mounted Duffy who took the win. Malkiewicz managed to make the pass on Budd for second just before the finish line, relegating Budd to third at the conclusion of the moto. Bova, and Hayden Matterson finished in fourth and fifth places, while Callum McGlade, Connor McNamara, Liam Andrews, Tyler Darby and Noah Coad completed the top ten in race one.

In moto two, riders were forced to contend with some of the most difficult conditions of the day. With the track drying thanks to the sunny weather, and three championship classes taking to the track prior to the Yamaha 250cc Junior category‰Ûªs final moto, the youngsters were dealt deep ruts and a tough track in their final race.

At the conclusion of the 15-minute moto, it was Malkiewicz who walked away with the final victory of the day followed by KTM‰Ûªs Mason Semmens and Bova in second and third places respectively.

Unfortunately, despite Duffy crossing the line first in the final moto, the KTM rider was docked three positions due to jumping under a yellow flag which placed him in fourth once positions had been adjusted.

With results from both motos combined, it was Malkiewicz‰Ûªs 2,1 finishes that rewarded him with the top step of the podium and the championship lead yesterday, second at Horsham was Duffy, while Bova completed the Yamaha 250cc Junior class podium.

‰ÛÏI had a really good day at Horsham. I managed to qualify third and finish with 2,1 results which gave me the overall and the points lead heading into our last round,‰Û