Major changes in store when the 2017 TrialGP season kicks off 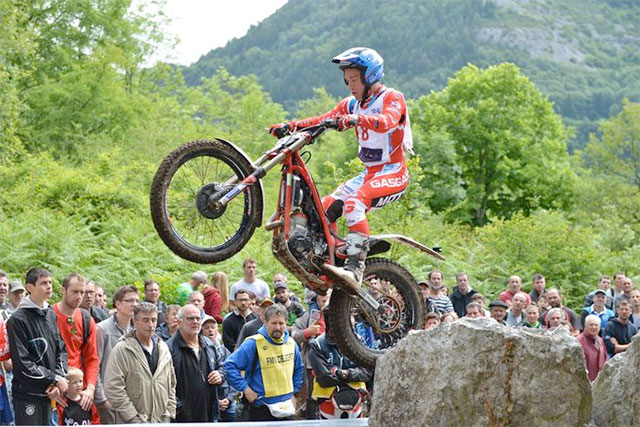 Next month will see the 2017 TrialGP season get underway in Spain with the new series boasting many changes that promise to shake up the championship and bring it in line with the standards that have long been part of the other two-wheel sports.

So before Bou and co arrive in the Spanish hills, here is a guide to what you can expect when the 2017 campaign comes to life.

Sport7 - Ready to make a difference
Absent of a championship promoter for many years the FIM Trial World Championship, that becomes TrialGP will benefit from the expertise and experience that the Sport7 team (sister company to G2F Media) will bring to the series. Headed by Jake Miller, a man who has spent the last twenty-five years working inside the Trial paddock in a number of different roles and perhaps best known as Dougie Lampkin's manager for almost twenty years will use his wealth of knowledge to take the sport in a new direction. With his equally qualified staff at his side, who have been responsible for delivering five British TrialGP competitions in the past and several high profile Red Bull events over the last fifteen years, Jake and co will look to impose the same level of professionalism that has become the company's trademark for each and every project that they have been involved with since 1998.

TrialGP / Trial2 / Trial125 - Class is everything
The premier class - namely TrialGP is now only open to the previous season's top ten riders plus a handful of other elite riders selected by the FIM/Sport7 who are deemed to have the correct ability / potential to tackle the high-level sections that define this class. A total of eighteen permanent TrialGP riders on bikes over 250cc will contest the 2017 season. Trial2 becomes a full FIM World Championship - now the same as TrialGP and no longer a World Cup - and is restricted to 250cc two-stroke machines. This class, with its new status is packed with emerging talent, who will fight it out over all eight counting events, with no rounds being dropped this year. Trial125 will be contested over the opening five events, again with all rounds counting, this shorter format series has already seen entries for the entire championship rise four-fold.

TrialGP Women / Trial2 Women - New classes for the ladies too
Ensuring equality, the FIM Women's World Championship - now known as TrialGP Women will comprise of the top twenty female riders with a brand new second class having now been created to cope with the increasing number of Women riders taking part in the series. Trial2 Women, a new FIM World Cup, will offer a great pathway for the younger female riders who like their Trial2 male counterparts will be restricted to 250cc machines. Both of the Women's classes will kick off in July, with the three-round series starting at the TrialGP USA, which marks the first time the female championship has ventured outside of Europe.

Qualification - Poles apart
For many years, Trial has gifted the best starting position - at the back of each class - to the best rider with ranking having previously determined the starting order at each event. Handing the best riders this clear advantage free of charge did not seem fair, so a new level playing field has now been introduced with a single time section deciding the starting positions within each class. Played out the day before the main competition, riders will have to risk speed as well as observation with priority being given to the more traditional scoring method, but ties being decided by time. Put simply the rider who goes fastest and clean will take pole position. Whilst the best riders will always rise to the top, no longer can they be guaranteed of the best place on the grid without earning it. Qualification is sure to serve up some surprises and shake up the order.

Fixed format - Time matters
Making it easier for fans to follow the action Qualification and the Trial itself will take place at the same time in each and every country, with the main event starting at 9.00hrs Sunday in Europe and at 9.00hr Saturday / Sunday in Japan / USA. Qualification is at 15.00hrs on Saturday in Europe and 15.00hrs on Friday outside Europe. Each event will consist of two laps of fifteen sections, with the riders allowed a maximum of two and a half hours to complete each lap, never more time and now with a twenty-minute forced break between laps so both riders and fans can grab some well-deserved refreshments. The winners will be on the podium at 15.45hrs prompt so the family can be home in good time.

Live results + more - Join the TrialGP Family
Using satellite technology - for the first time ever live official section by section results will now be available in real time both at the event and for fans elsewhere via a soon to be released new mobile app and webpage. For more details on this and everything that is TrialGP visit www.trialgp.com / follow @trialgp on Instagram + Twitter and search TrialGP on Facebook - Become part of the TrialGP family by using #WeAreTrialGP