On Sunday the huge Freestyle MX weekend came to an end in the economic metropolis of Shenzhen, China.

Forty World Championship points were awarded over the two nights of competition and all of them went to the reigning World Champion, Maikel Melero in First Place each night. With a perfect outing in China, the little Spaniard has been crowned for the third time in a row, the FIM Freestyle Motocross World Champion.

Melero only required to put together a safe run to make it to the final 6 and it would have been enough to claim the points to finish the season as the World Champion. 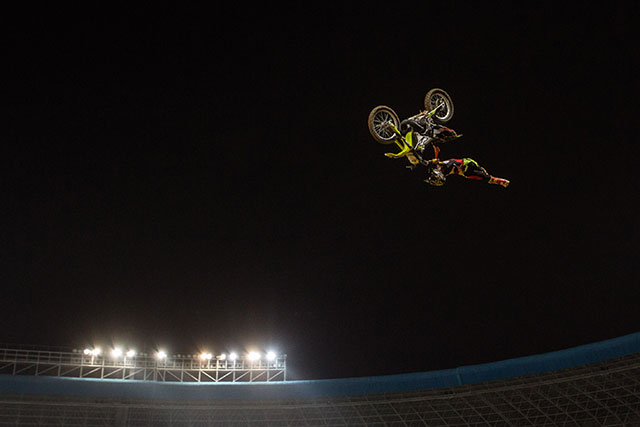 Maikel Melero Winner Sunday Shenzhen and 2016 World Champion
With pressure coming from Rob Adelberg though, Maikel decided to move from a safe run to pushing his limits and proving why he is a World Champion taking pole position in the qualification round and then finishing the night with a huge run including the Stripper Flip, Surfer Tsunami, Lazy boy Flip, Shaolin Flip and the California Roll body varial to make sure he took his 9th win of the season. He showed why he was a deserving World Champion and why he won every round of the season except for Cologne when he had a huge crash in practise.

The biggest surprise in Shenzhen was fellow Spanish rider, Marc Pinyol who made it to the final round for the second night in a row. Pinyol risked it all, bringing all of his biggest tricks including the Surfer Tsunami Flip, Egg Roll and two body varials, the California Roll and his signature Inside Roll. With his solid results it could be enough for securing a spot in the NIGHT of the JUMPs 2017 season.

Rob Adelberg planned to be the deciding factor in China and to defer the World Championship decision to the last round in Poland. However, he wasn‰Ûªt able to get in front of Melero over the weekend and missed the chance. On Sunday, Adelberg put together one of the cleanest runs but was pipped by only a single point behind Pinyol to take 3rd place.

Petr Pilat was one of the most loved riders with the Chinese crowd. In front of 20,000 people, the Czech star brought his A-Game with all of his unique backflip combinations and it was enough to put him in the best position to take a Bronze Medal overall for the World Championship. The only rider who could possibly challenge him now would be the three time World Champion, Remi Bizouard. But with his disappointing showing in Shenzhen, it will be tough for him to push Pilat at the season finale in Gdansk.

In the Maxxis Highest Air, Massimo Bianconcini restored his position at the top with a winning jump of 10.00 metres and relegating Brice Izzo back to second place.

In the LifeProof Best Whip competition, the previous day‰Ûªs winner, Pat Bowden, went up against his rival Marc Pinyol in the final. The Australian jumped the most over the weekend with all of the disciplines and it showed on the second day when Marc Pinyol threw the biggest whip and won. Still, it might be enough for the Australian to make a return in the 2017 competition series.

The finale of the FIM Freestyle MX World Championship will take place in three weeks‰Ûª time with the NIGHT of the JUMPs return to Gdansk/Poland (19th November, 2016, ERGO Arena). 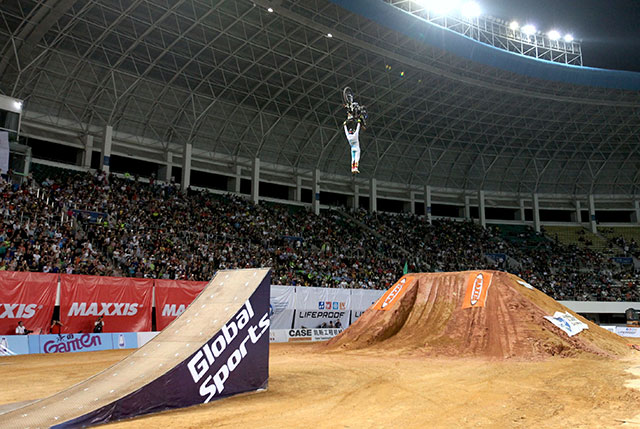 Australian Rob Adelberg is second in the standings with one round to go.
The World Champion is certain now with Maikel Melero and the Silver medal has already been awarded to Rob Adelberg. However, behind these two riders is a battle for the Bronze medal and the other positions. The final of the World Championships will see the best riders bring their best tricks and finish the year on a high before coming into the new 2017 season and starting fresh with a clean slate.