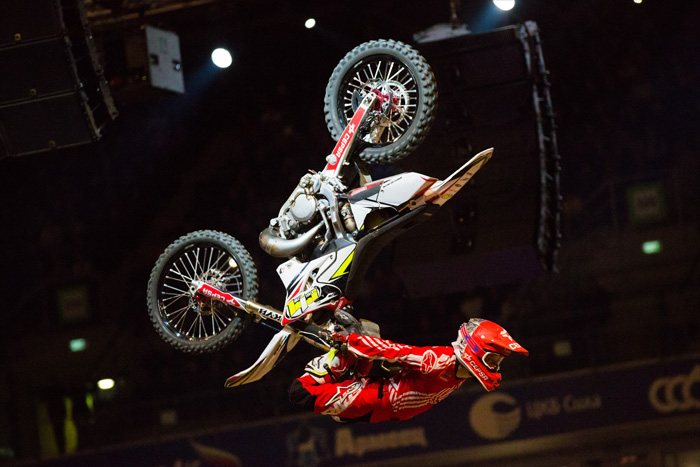 The Finale of the NIGHT of the JUMPs World Championships went down in front of a sold out Armeec Arena in Sofia and delivered the most exciting final ever witnessed.

Before the final round of the FIM Freestyle MX World Championships the two adversaries David Rinaldo (FRA) and Maikel Melero (ESP) were separated by a mere two points. The result would come down to the last seconds of this year‰Ûªs World Cup.

For the two rivals, they were once again safe to qualify into the final. This was especially important for Rinaldo who had the even more difficult task of overcoming his continuing shoulder injury.

Despite the battered shoulder he would sit in second place after qualifying. Maikel Melero‰Ûªs nerves held out, as he performed the California Roll, Flair and Double Grab flip which put him at the head of Qualification.

Australina Rob Adelberg along with Brice Izzo, Remi Bizouard and Petr Pilat also fought off the challengers to make the final six.

Opening the Final round, Rob Adelberg needed to push for a podium position after his sixth place qualification. Adelberg accented his perfect run by landing his first ever California Roll to No Hand Landing combination without a bar check.

Rob‰Ûªs run was enough to make it to the podium, but he also benefited from the crashes from fellow competitors Brice Izzo who crashed on his Flair in the Double Up and then Remi Bizouard who also landed hard from a Volt body varial.

Then the big moment arrived to the 10,000 spectators in the Armeec Arena with the final showdown between the first and second placed qualifiers, Maikel Melero and David Rinaldo. The Frenchman had to show his cards and rode first.

Opening his account with a spectacular Volt and then straight into a California Roll, it appeared that Rinaldo was about to put together an impressive run. Until David suffered from nerves and didn‰Ûªt extend through his Cordova Flip and then subsequently didn‰Ûªt execute the Clicker-SuperFlip Combo with the usual precision the fans expected.

David fought back and showed an extra trick to help his score and then the Double Hart Attack Flip in the Double-Up. His mistakes cost him the lead and he found himself behind Adelberg on the hot seat.

It was enough to keep the pressure on Melero to perform a perfect run if he was to still win the World Championship.

The little Spaniard however didn‰Ûªt disappoint the Bulgarian crowd as he held his nerves and to retain his World Championship title. After landing his own version of the Cali-Roll, Double Grab Backflip and the Flair with Nac-Nac combo in perfect fashion, Melero would his onto his lead until the very end.

With the victory he landed two points ahead of Rinaldo in the overall results and defended his World Championship success and become only the second rider to win two consecutive World Titles in the FIM World Championship history.

Adelberg rounded out the final podium spot in the championship standings. 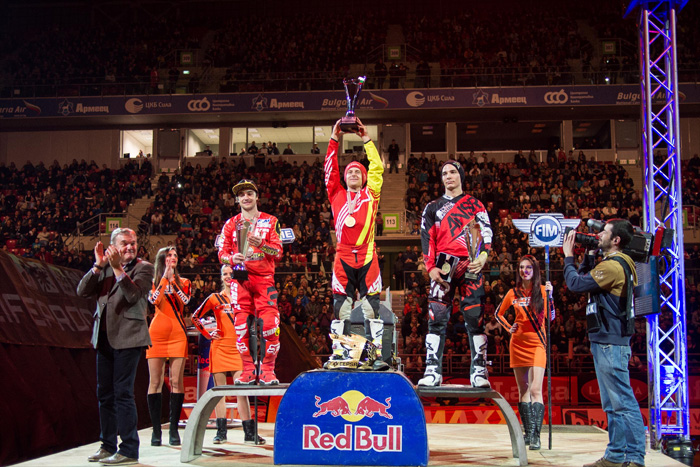