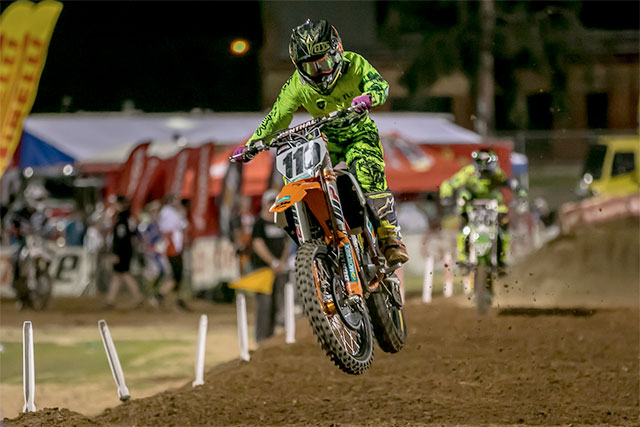 A maiden podium to KTM Motocross Racing Team rider Kyle Peters and an impressive fight back by Jesse Dobson made Saturday night‰Ûªs third round of the Australian Supercross championship a positive one as the series wound its way to Wayville Showgrounds in Adeliade, South Australia.

Peters finished third in the SX1 main event, which went to Justin Brayton ahead of Daniel Reardon.

The KTM rider qualified seventh fastest and finished fourth in his heat, before firing his factory KTM450 to a super-fast start in the main, then as the conditions became trickier with track deterioration, the 23-year-old American maintained a more consistent pace than some and brought home his first podium of the series.

After finishing fourth last time out in Toowoomba, last night‰Ûªs result sees Peters leap frog more places in the rankings of the national championship, in which he now sits in seventh place.

‰ÛÏThe night started off pretty good, with a holeshot in their heat, but I made a few mistakes and dropped back a little," Peters explained. "I made a few changes to the bike and kind of manned up a little in the main and made it happen, I came out second off the start, Reardon got around me, and then about halfway through I started catching him again and ended up third.

"But it was a good night, for sure," Peters continued, "I got fourth of the previous round and third at this one so I'm happy with the progression and want to just keep getting better and better. Adelaide is a really awesome town, I had a lot of fun just going out to dinner and seeing the sights, so I'm excited to end the trip with a podium.‰Û 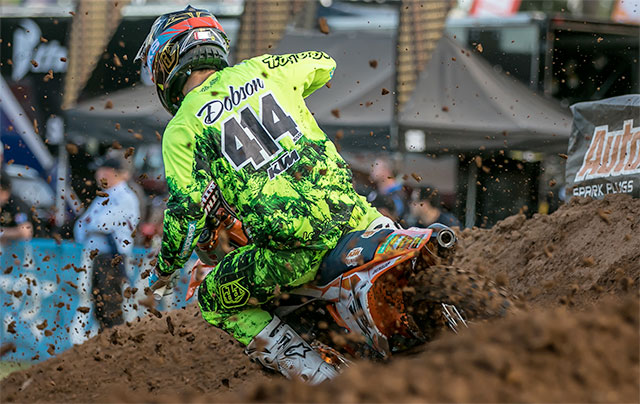 Jesse Dobson. Photo: Arryn Minerds
KTM team mate Jesse Dobson‰Ûªs supercross season also took a step in the right direction, the young gun climbing as high as sixth place after a mid-pack start before a mid-race contact with a lapper dropped him outside the top ten.

The determined Sunshine Coast rider had been showing phenomenal speed in the whoops all night however, and used his advantage to move back into the top ten and salvage a solid eight place finish.

‰ÛÏIt was progress. We qualified sixth, which wasn't too bad considering I had three crashes in that 10 minute qualifying," Dobson said. "In the heat race, I just wanted to stick with my plan of getting through without incident and go into the main with a half decent gate pick.

"In the main I was just trying to do 20 solid laps, but unfortunately I got a really bad start and there was a heap of carnage around. I just passed a couple of good guys and was sitting in sixth, but I came up on a lapper in the whoops and I ended up just tagging the rear wheel of him and going down. So I went back to work and ended up eighth.

It‰Ûªs okay, it‰Ûªs a result. I‰Ûªm not happy with it, but it's something to build off when we go to Melbourne," Dobson concluded.