Maiden MX1 Round Victory For Lawson Bopping At Coolum 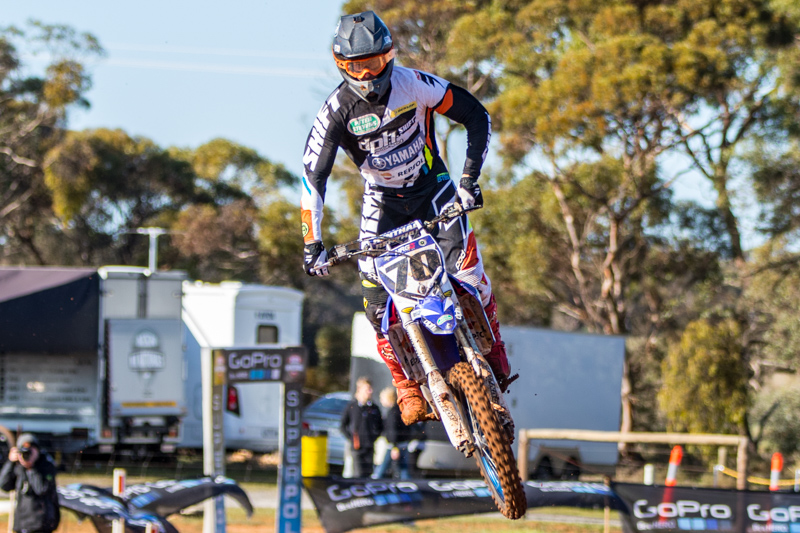 DPH Motorsport‰Ûªs Lawson Bopping has claimed his first overall win for 2015, on one of the toughest circuits of the series, at round five of the MX Nationals in Coolum today.

After kickstarting his day with a Go Pro SuperPole win, Bopping went on to put in an outstanding performance, in conditions that tested the most experienced MX Nationals athletes.

Despite a first turn pile up involving CDR Yamaha teammates Daniel Reardon and Kade Mosig, Bopping dodged the carnage and claimed the first holeshot of the day for Yamaha. Bopping then went on to lead for the entire race, until former World Champion Ben Townley took control and secured the race lead at the 25-minute mark.

Proving that retirement is no issue, Penrite Honda‰Ûªs Townley went on to claim an epic race one win, in his first MX Nationals appearance for 2015. Crossing the line in a close second was Bopping, followed by KTM‰Ûªs Kirk Gibbs who put in a huge charge to come from 16th all the way back to third.

In race two, it was all about red plate holder Kirk Gibbs. After taking the holeshot, Gibbs stretched out an early lead on the field, and by the 30-minute mark, finished moto two over ten seconds before second place getter Bopping, and Townley who crossed the line in third.

Despite Gibbs‰Ûª form, a second place, was all that was required in race two for Bopping ‰ÛÒ handing the Yamaha mounted rider his first round overall for 2015, ahead of Gibbs who took second, and comeback king Townley who finished round five in third.

"This is a great feeling taking this overall and it's just great to be able to give back to Dale and the whole DPH team," Bopping said. "Today was an awesome day - To get the win in SuperPole and holeshot the first moto was really good, and then in the second race I just did what I had to do.

"It was just a really fun day really. The guys are a lot of fun to race against and Townley hasn't lost anything that's for sure (laughs), but i'm just pumped - this is a big achievement for me." 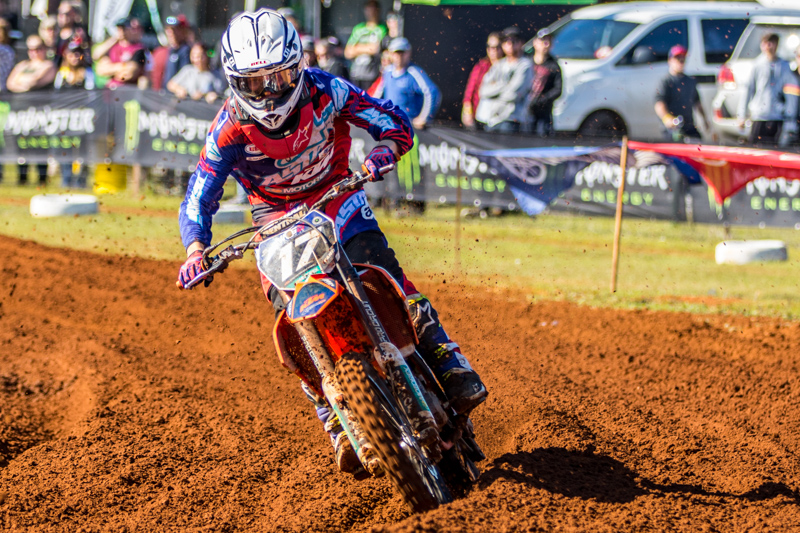 Caleb Ward backed up his round win at Murray Bridge with his second round win of the year at Coolum - Credit: Aaryn MInerds (File)
In the MX2 class it was KTM Australia‰Ûªs Caleb Ward who once again shown the Motul MX2 class that he is back with a vengeance, claiming the round five overall win on home soil.

With Coolum being the last outing for the Motul MX2 class before the mid-season break, round five of racing was fast, aggressive and game changing across both challenging motos.

In moto one, new faces graced the front of the class with privateers Wade Hunter and Riley Graham both leading race one for short periods of time. However Ward‰Ûªs speed was once again a force to be reckoned with.

Adding yet another race win to the collection, Ward crossed the line in first position ahead of Serco Yamaha‰Ûªs Luke Clout in second, and Kawasaki Australia‰Ûªs Takeshi Katsuya who continued his trend finishing in third.

In race two, the point was proven that it pays to be local. Husqvarna Racing Team‰Ûªs Nathan Crawford showcased his talent on the brutal Coolum circuit, sharing the lead with JCR Yamaha‰Ûªs Jay Wilson throughout the moto before eventually taking the chequered flag in first position.

Fellow local Ward fought until the end in moto two ‰ÛÒ charging from the back of the pack all the way up to third, Ward then managed to make the pass on Wilson for second on the very last lap, leaving Wilson in third at the conclusion on the race.

Despite Crawford‰Ûªs race win, the consistency of Ward was just too good -rewarding KTM yet with another round on the MX2 podium ahead of Nathan Crawford (Husqvarna) in second, and JCR Yamaha‰Ûªs Wilson who finished the round in third.

"I had two bad starts today and had to come through the pack but it's still awesome to get the overall that's for sure, he said.

"I want to try and win as many races as possible, and this round wasn't too bad, but obviously I'd like to keep pushing forward and get some more moto wins.

"I'm just going to strengthen my leg up a bit in the break, keep training and then come back for the second half strong, but overall today I'm pretty happy with my result."