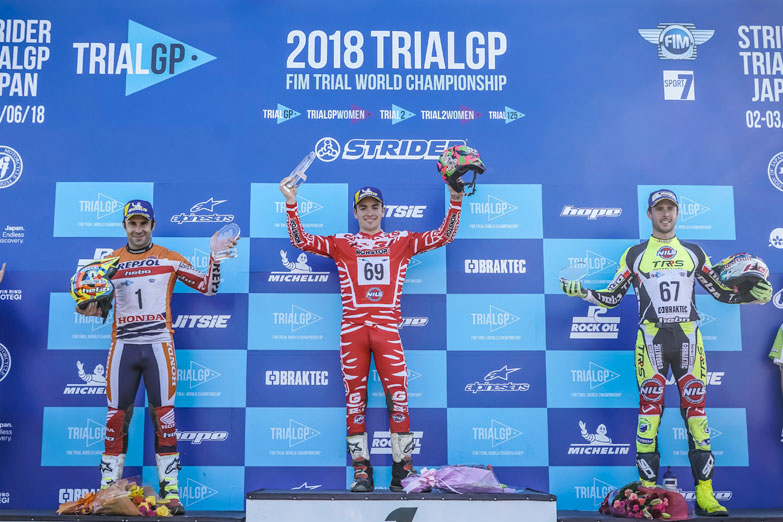 Gas Gas' Jaime Busto stands on top of the podium for the first time in his career. Photo: trialgp.com
The sensational shake-up at the very top of the sport continued today on the second day of TrialGP Japan - round two of the 2018 FIM Trial World Championship - at the Twin Ring Motegi circuit.

At an event where HRC were looking to celebrate one hundred TrialGP wins for Toni Bou in their own backyard, instead it was Gas Gas who did the double with their two new signings for 2018 as Busto replicated his team-mate Jeroni Fajardo's victory the day before.

Busto got off to a shaky start with the only maximum on section two on the opening lap, but the twenty-year-old made amends with a superb single-mark score on section thirteen which, along with five other sections, had been made harder after yesterday's Trial. Comprising a series of huge black, polished rocks with a monster step to finish, the awkward approach to this imposing exit was where the Trial was won and lost. 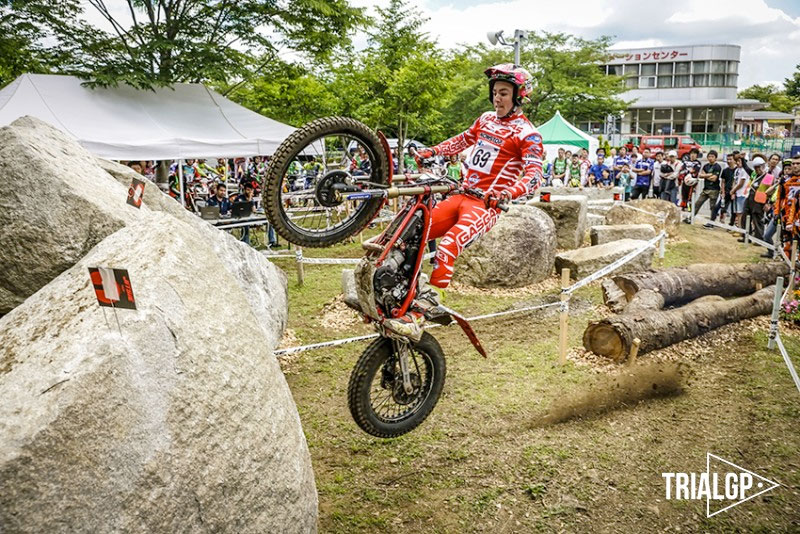 Jaime Busto in action. Photo: trialgp.com
With Bou looking to be back in full control up to this point after his surprise slip to fourth on the opening day, the eleven-time champion took a maximum to bring Busto back into contention.

It was actually Adam Raga - TRRS who led after the opening lap. The two-time World Champion's inch-perfect clean on section thirteen put him on a score of just eight at the halfway point compared to Bou's eleven and Busto's twelve, but his hopes of victory began to unravel at the start of the second lap when he too took a five at section two.

Section fourteen had been almost universally cleaned on the opening lap while section fifteen had taken maximums from the entire field so when the Spanish trio arrived at section thirteen for their second attempts it was crunch time!

With Busto on a total of thirteen, Bou and Raga on fourteen and Fajardo still in with an outside chance on eighteen, the tension - increased by thirty-degree heat - was palpable.


Fajardo had looked out of contention following his opening lap of eighteen. The Spaniard had dragged himself back into the hunt with a faultless final lap up to this point, but his chances of a second victory were finally derailed when he scored a maximum and his compatriot Raga suffered the same fate.

Bou struggled through for a three to keep his hopes of winning alive, but Busto sealed his first top-flight victory with another sensational single-mark ride.

"I am very, very happy," says Busto. "I had such a good feeling with the bike and I can't believe I have won. It is amazing."

After everyone apart from Spain's Jorge Casales - Vertigo took a maximum on section fifteen, the Trial finished with Busto on nineteen from Bou on twenty-two with Raga completing the podium on twenty-four, four ahead of Fajardo.

"I am happy to have got the good feelings back on the bike today," Bou said. "In the end the weekend has not been so bad, especially as we have to say that this has been a different year for us, since we had an injury that prevented us from maintaining the usual training schedule in preparation for the world championship; I still have some discomfort and for me it has been difficult to find the right pace. It's been tough for me despite getting the victory in the first race. We will continue fighting to recover from the injury and hope to be able to return to training to fight in this championship which is very tightly fought," the defending champion concluded.


Spain's Albert Cabestany - Beta, who cleaned section thirteen at both attempts, was six marks further back and took fifth on a tie-break with Britain's James Dabill - Beta. Casales was next on thirty-eight before a big gap to Spaniard Miquel Gelabert - Sherco.

Bou now heads both Busto and Fajardo by 2 points in the general standings after two rounds. 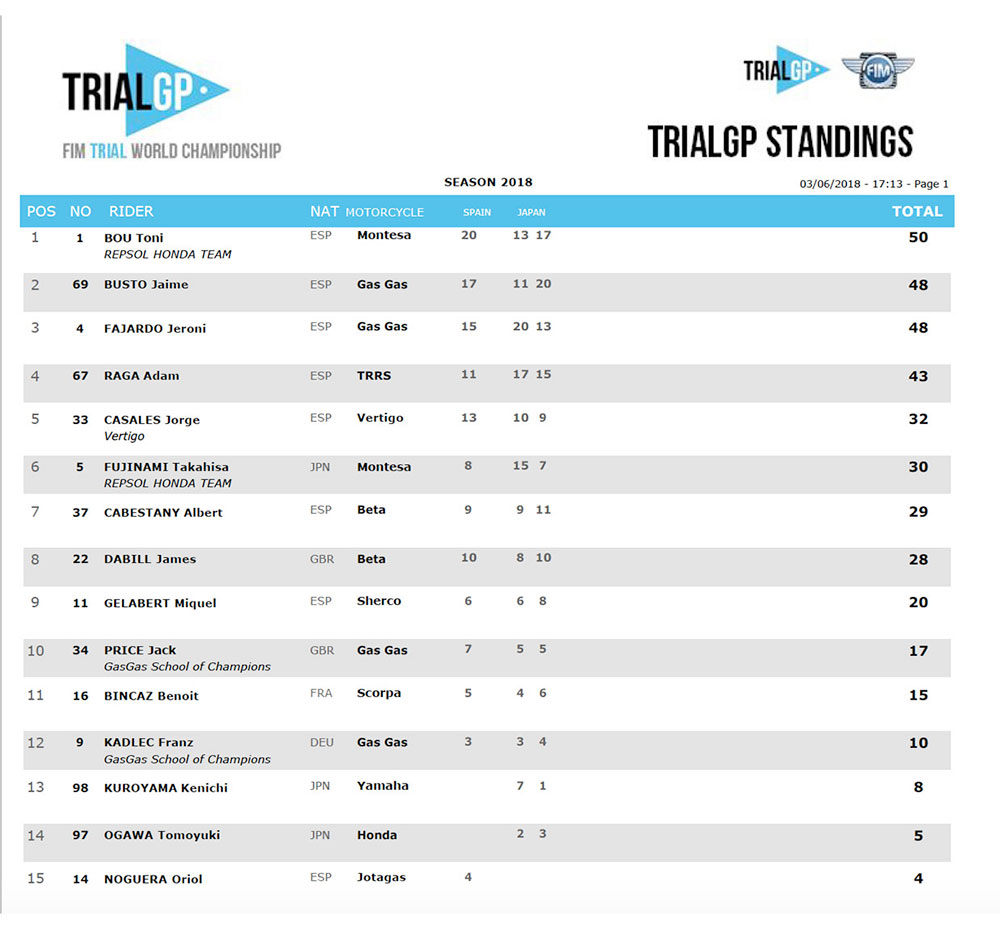