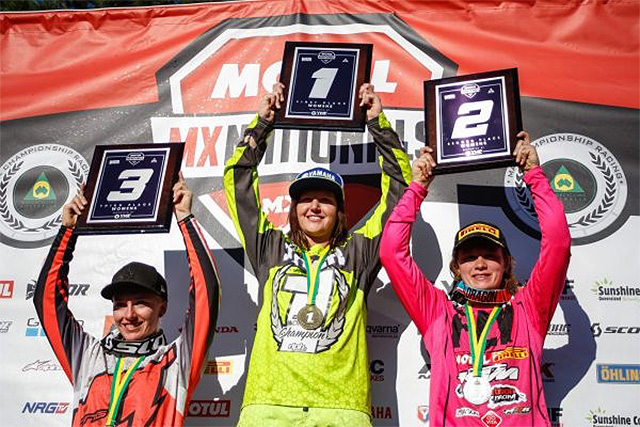 After narrowly missing out on the championship win in 2016, DPH Motorsport‰Ûªs Maddy Brown was crowned the 2017 Yamaha Motor Finance Women‰Ûªs Australian Motocross Champion at Round 10 of the Motul MX Nationals at Coolum today.

The YMF Women raced for the title a total of four times at Coolum over Saturday and Sunday, with Brown and defending champion Jessica Moore providing a packed crowd with some of the best racing of the 2017 championship.

The women lined up in record numbers yesterday (Saturday) morning, with competitors provided with their first opportunity to hit the track in their practice and qualifying sessions ahead of their four points paying motos.

KTM Australia‰Ûªs Moore wasted no time in making her presence known, securing the fastest lap time on track with a 1:47.706 qualifying lap, 2.3 seconds ahead of closest competitor DPH Motorsport‰Ûªs Brown (1:50.034) followed by Tori Dare (Yamaha) who was third quickest on Saturday morning (1:53.012). 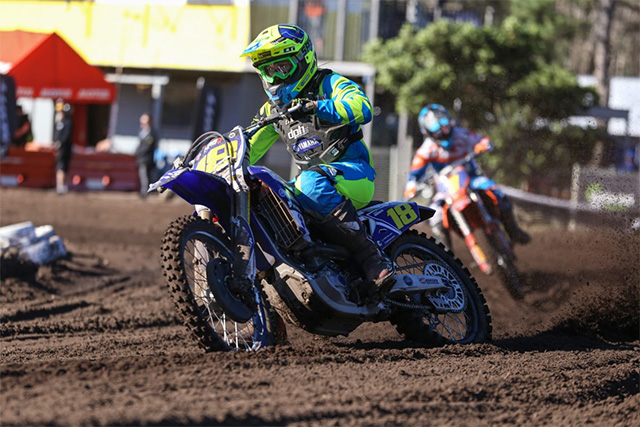 Maddy Brown was crowned 2017 Yamaha Motor Finance Womens‰Ûª Australian Motocross Champ after taking 3 wins and a second. Credit: MXN Images
When gates dropped on race one for the Women in windy conditions at Coolum on Saturday, it was no surprise to see the number 1 machine of Moore through the Raceline holeshot section of the track in the lead position, however with Brown on her tail, and out for redemption after losing her title to Moore in 2016, race one for the ladies was set to be epic.

After a lap on the rough Coolum circuit, Moore and Brown had separated themselves from third placed Dare, the pair going head to head for the all important race lead, and mid-way through the second lap, Brown made a move on the Western Australian rider stick, launching her DPH Yamaha into the lead for the first time in the moto.

With the lead pair increasing their gap on third place to 12 seconds after three laps, the attention soon shifted to the battle for the positions behind them. Behind Dare, was Dannielle Foot (KTM) in fourth, followed by Courtney Whyte-Dennis (KTM) and Yamaha‰Ûªs Charlotte Gamble who were all going at it for positions inside the top five.

With only three laps remaining, Brown began to stretch out her lead on Moore, showing off her recent international experience racing the MXGP‰Ûªs, and by the time the Victorian rider received the last lap board, Brown was in the box seat to collect her first race victory of the weekend.

Despite an epic last lap battle between Brown and Moore, it was the DPH Motorsport rider who fought off the defending champ and secured the race win, second place went to Moore, while Dare finished in third, 54 seconds behind the top two. Foot and Whyte-Dennis wrapped up race one in fourth and fifth places respectively, followed by Gamble, Chelsea Blakers, Chelsea Carter, Lauren Jones and Lily Kent. 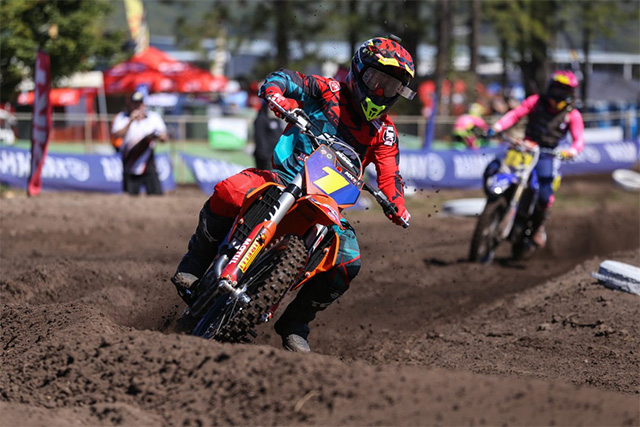 WA's Jessica Moore wsa a solid second best on the day. Credit: MXN Images
In the second moto for the ladies, riders were forced to contend with one of the toughest tracks of the day, and despite Honda rider Steph Cutler securing the hole shot, after only half a lap Moore had once again moved in to the race lead.

But just like race one, Moore wasn‰Ûªt alone, and only a few turns later Brown had found her opponents rear wheel.

Behind the top two, Dare once again led the charge for third, followed by Cutler, Carter and Whyte-Dennis. But it was the battle for the lead between Moore and Brown that captured the crowd‰Ûªs attention in race two.

As riders headed in to their fourth lap, Brown had become the new race leader, relegating her Western Australian competitor back to second position. From there, Brown remained in control, however it was clear that Moore was determined not to let the Victorian out of her sights.

But when the chequered flag flew for the final time yesterday, Moore was unable to match Brown‰Ûªs speed with Brown taking her second race win for the day, while Moore was forced to settle for second. Third place went to Dare aboard her Yamaha machine, while Whyte-Dennis and Carter completed the top five in race two.

The third moto for the ladies took place early at Coolum this morning and once again it was no surprise to see Brown and Moore going at it for the entire moto.

When gates dropped, it was Moore who collected the Raceline holeshot but after only two jumps on track Brown was once again hot on her heels.

After a lap on track Carter and Dare slotted in to third and fourth behind the lead pair, while Kent and Cutler completed the top five after a single rotation.

With the track ripped overnight, the ladies were handed a drastically different Coolum Pines circuit in race three, but both Moore and Brown were not phased, ticking off lap after lap and stretching out their lead on the field of female riders.

By the halfway mark in race three, there had been no change to positions however Brown had begun to close in on Moore at a rapid rate, setting up the final laps as a dash to the finish line.

But it was on the final lap that Brown made her move, taking the race lead as well as the race victory, second place in race two went to Moore, while Dare took third in moto three. Whyte-Dennis wrapped up race three in fourth, ahead of Carter, Kent and Foot. 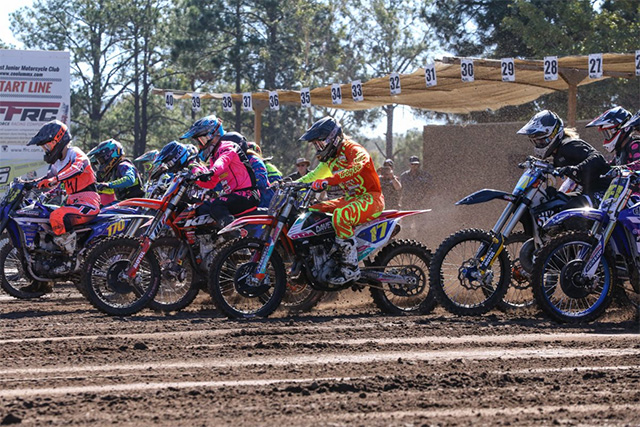 A healthy grid of 31 women blast out of the gate. Credit: MXN Images
The final moto took place in front of a packed crowd at Coolum this afternoon, with thousands dotting the fence-line to see the women go to battle for one last time.

When the engines roared back to life and bikes left the grid it was Dare who secured the Raceline holeshot, but unfortunately two crashes on the first lap captured the crowd‰Ûªs attention, with two riders going down in separate incidents.

Once medical had attended to the ladies, the focus soon shifted back to the race, and it was no surprise to see Moore leading the way from Dare in second, while back in third was the undefeated Brown.

With seven laps on track for the final women‰Ûªs race of the day, the ladies were sprinting on one seriously rough sandy circuit, and one rider who had made it her mission to make her way to the front was Brown, and by lap three she had passed Dare and moved up to second position.

But by the halfway mark in the final moto, Moore had more than a 15 second lead on now second placed Brown, meanwhile behind the top two, Dare continued to maintain third position from Whyte-Dennis, Foot, Carter and Kent.

As race four progressed, Whyte-Dennis found her second wind, and as a result made her way up to third, relegating Dare to fourth place.

By the time riders received the last lap board for the final time at Coolum, Moore had stretched out her lead to an incredible 26 seconds from Brown, proving that the Western Australian rider got quicker as the track became more difficult.

And when the number one machine crossed the finish line for the final time this afternoon, it was Moore who had reason to celebrate ‰ÛÒ claiming her first race win of the weekend. Second place went to Brown, followed by Whyte-Dennis, Dare, and Foot who completed the top five.

But with 1,1,1,2 race results it was Brown who was crowned the 2017 Yamaha Motor Finance Women‰Ûªs Australian Motocross Champion today. Second in the standings was KTM Australia‰Ûªs Moore, while Dare managed to secure third in the championship thanks to her consistency at Coolum.

‰ÛÏIt was awesome racing Jess (Moore) this whole weekend, she was definitely on my tail and I mean it feels so good to win because she didn‰Ûªt make it easy,‰Û 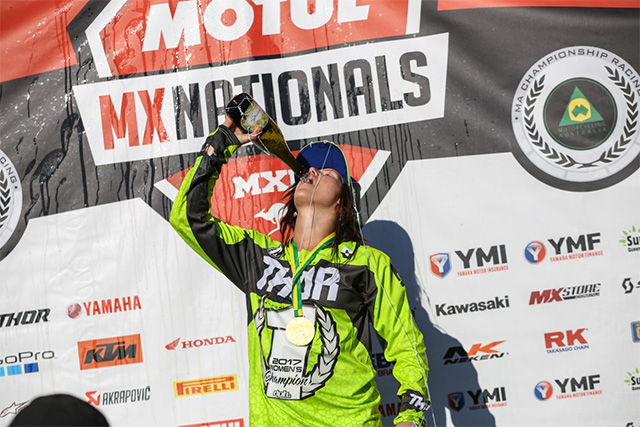