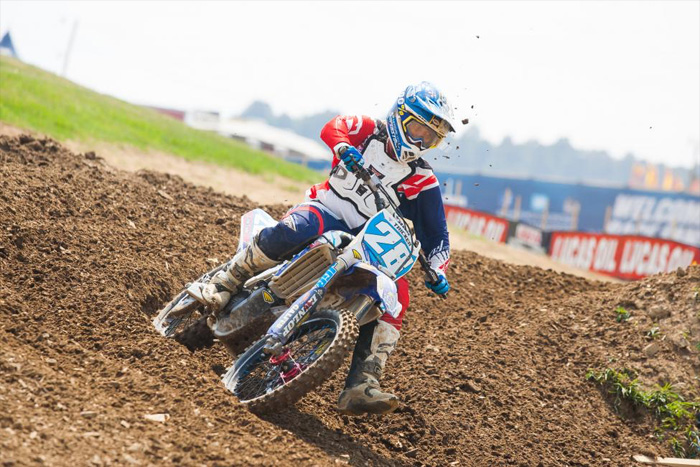 With one round remaining on the schedule, Kylie Fasnacht moved to within two points of series points leader Marissa Markelon after taking the overall win at round seven of the Women's Motocross Championship Series at RedBud Raceway in Buchanan, Michigan.

The outcome on the rough and rutted RedBud course will most certainly make for an exciting finish to an already eventful season at the series finale in Indiana.

Fasnacht used a pair of second place moto finishes to beat out Kaitlyn Morrow's 4-1 tally and Markelon's 1-4 performance for the overall win.

In moto one, Markelon put her Team Green Kawasaki ahead of early leader Mackenzie Tricker on the second lap of the race and pulled away to a 10-second lead, taking a relatively easy win over Fasnacht and the Yamaha-mounted Tricker.

Moto two saw Australia's Tricker and Markelon at the front again, passing back and forth for the lead over the course of the first two laps. However, near the halfway mark of the race, Markelon took a hard fall, losing almost a full lap by the time she got going again.

"We had a really good race going on," said Markelon. "I passed her and then she came back and passed me, but then right before the finish line I went down and hit my head pretty hard. I don't really know what happened, I just know I got up and I was about sixty feet away from my bike.

"When I got going my bars were all tweaked and I remember thinking I had to try and ride this thing for the remainder of the 15 minutes."

In the meantime, Yamaha-mounted Kaitlyn Morrow had worked her way into the number one position ahead of Fasnacht and Tricker, while Markelon was able to scratch her way back into fourth by the end of the race. At the finish, the order was Morrow, Fasnacht, Tricker and Markelon.

Fasnacht's steady 2-2 day earned the Kawasaki rider her third overall win of the season, while Morrow's 4-1 performance landed her in the runner-up slot.

Though Markelon saw her points lead shrink with her 1-4 finish for third overall, the Connecticut rider is still confident heading into the series finale in at Ironman Raceway in Crawfordsville, Indiana.

"It wasn't a terrible weekend," said Markelon. "I didn't get a concussion and I was able to hold onto the points lead and I'm healthy. I wanted to win and I should have won, but that just makes me more determined going into the final round. I just want to go into Indiana and get two moto wins and hopefully that will get us the championship again."

With one round remaining, Markelon holds the series point lead with 303 points, while Fasnacht is nipping at her heals at 301 points. Tricker sits in third with 257 points.

The eighth and final round of the Women's Motocross Series takes place on August 21st at Ironman Raceway in Crawfordsville, IN. For more information on the WMX series check out https://racewmx.com.

Top Image: Australia's Mackenzie Tricker sits third in the championship standings with one round remaining