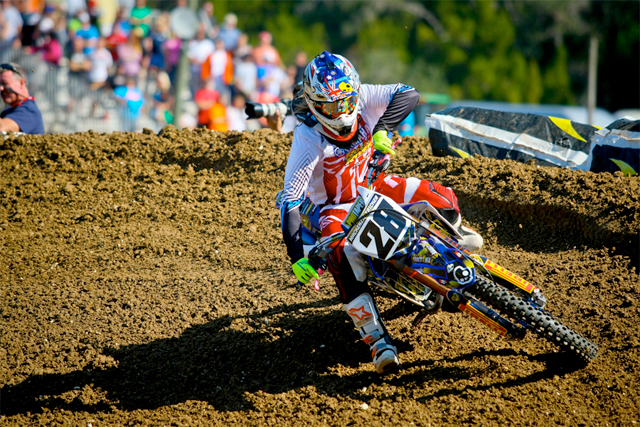 Australian Mackenzie Tricker has recorded a fine second place overall finish at the final round of the 2013 Women's Triple Challenge which made up the 2013 Women's American motocross championship.

The final round was held at the famous Southwick motocross track as part of the complexes final ever moto event, with Tricker bouncing back from a knee injury sustained at round two, finding her way back on to the podium.

"My day was solid, in the first Qualifying session the track was the smoothest it was going to be all weekend, a good time was needed for a good gate pick," Tricker explained. "I finished up second behind eventual champion Jessica Patterson.

"In the second session I qualified fastest over Patterson but as the track was rougher the times were slower then the first session," Tricker added.

"Second gate pick allowed me a good gate pick, I had a little bit of trouble on the gate as the 30 second board came up and missed the jump which left me buried in the field in the first lap of moto 1. I was able to make my way to the 3rd by the end of lap 1 and then to 2nd as the race went on.

"My knee was giving me a little grief in the first moto but on a track like Southwick in the deep sand that was to be expected.

"Moto two as we lined up in staging a big black cloud slowly covered us, as the 30 second board came out it began to rain very hard." Tricker continued. "I was able to get a decent start and put myself in a lot better spot then the first moto.

"I was duelling in a 3 way battle for the first half of the race with Patterson and Peterson and I was able to gain the lead mid race and lead some laps. Patterson got the better of me and I finished 2nd to her in the second moto.

The 2-2 results for the weekend left the 18 year old Tricker in 2nd overall and 4th in the Championship by one point. With the American Motocross championship now over, Tricker will now focus on two big upcoming events.

"Now my focus is set for Loretta's and X games, I'll be working a lot with my physiotherapist in the lead up to both these races to strengthen my knee as much as I can." Tricker concluded.