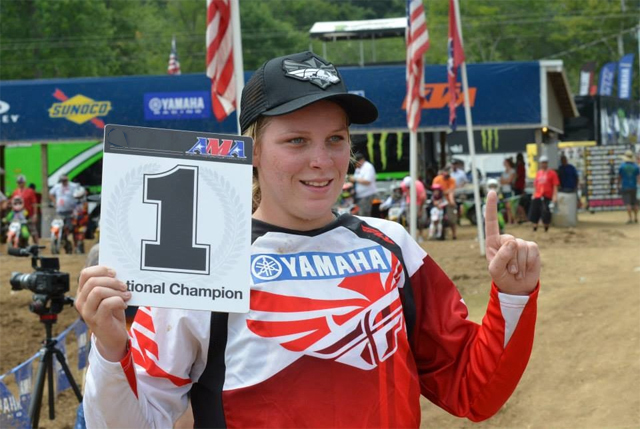 Australia's Mackenzie Tricker has won the opening round of the American Women's Motocross Championship, held in conjunction with the 5th Annual Monster Energy Ricky Carmichael Daytona Amateur Supercross on the historic grounds of Daytona International Speedway on Sunday and Monday the 9th and 10th of March.

Because of the two-race championship format, the WMX Class raced its first moto on Sunday and finished with the second moto on Monday, combining both motos for an overall finish.

Mackenzie aboard here Yamaha/FLY Racing/Motorcycle Superstore-backed YZ250F came away with the first WMX victory of the season and is now looking to establish a career in Women's Motocross in the U.S.

Mackenzie made a big impression on the industry as she scored a dominant 1-1 finish for the weekend, though feels she is still getting up to full pace as she returns from the knee injury she suffered in last years WMX championship.

"I don't feel I rode awesome, I struggled with flowing on the track but it's a good starting base for this year." Mackenzie told Fullnoise.com.au "Fresh off knee surgery I wouldn't say I'm 100% yet but it's a building process.

"I am going to put in two hard weeks of training now. I have some major room for improvement so I'm going to knuckle down and head to round 2 at Freestone, Texas on March 22nd."

Connecticut's Marissa Markelon put in a valiant fight in Moto 2, securing a second place finish, but she didn't have anything to offer Tricker in regards to the overall win. Florida's Kylie Fasnacht put in a solid 3-3 moto score, finishing third overall for weekend.