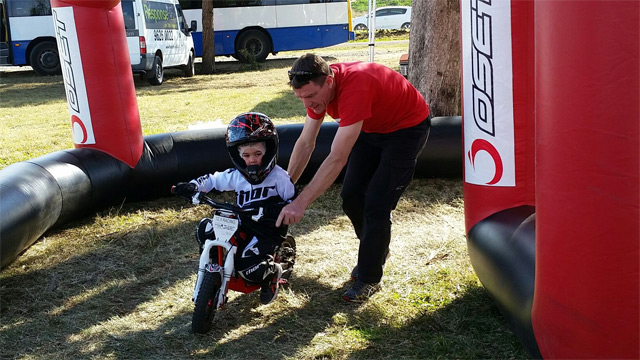 Motorcycling Australia's (MA) Junior Come and Try weekend at the V8 Supercars at Sydney Motorsport Park has been hailed as a major success.

Around 250 participants, with the majority being first-time riders, took part in the three-day clinic aimed at introducing children aged four to nine years to the sport of motorcycling in a controlled environment.

Experienced coaches and riders from the Baulkham Hills Junior Motorcycle Club, Penrith PCYC and Blacktown Minibike Club, along with former Australian Superbike Championship and World Endurance Championship winner Peter Goddard, were on hand to guide our newest riders through their paces upon a variety of bikes kindly supplied by Suzuki, Honda and Oset Bikes Australia.

One of the eager participants included Oliver Winterbottom, who showed off his skills on two-wheels while his father and Pepsi Max Crew V8 Supercar driver Mark Winterbottom looked on.

MA Board member Michael Strano said initiatives such as the Junior Come and Try program were all part of providing sustainable framework for motorcycling in Australia, and commended all involved in getting the program up and running.

‰ÛÏAll the MA staff members and volunteers from the clubs did an amazing job, and it was fantastic to see MA and the clubs working together to give back to the grassroots and the future of our sport, which is the kids,‰Û