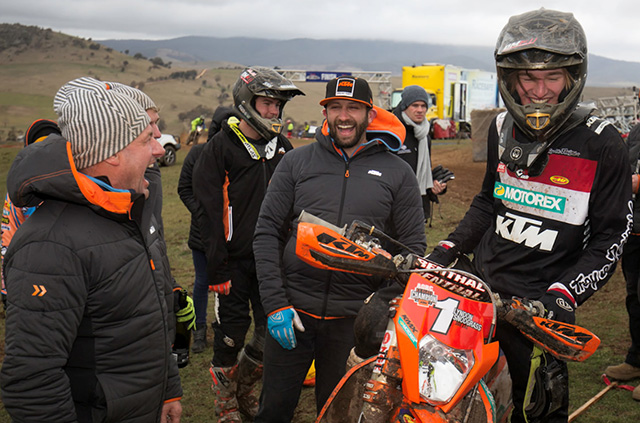 KTM mounted teenager Lyndon Snodgrass shone at the final round of the Yamaha Australian Off Road Champion as the E3 championship went right down to the wire.

Snodgrass had needed to defeat championship leader Lachy Stanford on both days in order to win the title, and he did exactly that, taking his KTM 300 EXC to double class victory and tying for points, which gave him the crown on a countback.

It‰Ûªs the second time in as many years that KTM Off-Road Team riders have finished 1-2 overall in Australia‰Ûªs premier off-road championship, with Daniel Milner and Sanders doing it this year while Sanders and Tye Simmonds accomplishing the feat in 2016.

‰ÛÏIt‰Ûªs been a good year battling, but to get the win‰Ûªs just been awesome," Snodgrass enthused. "I knew Lachy was going to be tough competition, and to come out on top in that battle is amazing. I was confident coming here that the track was going to be a lot of fun and I just kept on practicing and it all came together.

"This year I think has been about hard work, a lot of practice, and definitely working with Milner has been helping as well. He‰Ûªs been showing me a few things so it‰Ûªs good to have him help me out and have KTM 1-2 in the outright. Pretty cool. Omeo was an awesome place for the event, and the KTM 300 EXC was just a heap of fun on these tracks.‰Û